What is Parkinson's disease

Parkinson's disease - is one of the most challenging
neurological disorders. Its cause remains a mystery to this day.
However, active research work is being done in this area.

In 1817, English physician James Parkinson described a "shaking palsy", which was shown trembling hands and feet,
slowness of movement, "stiffness" of the limbs and body, and
and the instability and disequilibrium. This disease was
name of Parkinson's disease.

In the early 60-ies of the last century, researchers have identified
a very important fact about Parkinson's disease: loss of brain cells,
producing dopamine. This discovery was the first successful moment in
Parkinson's disease and was the starting point for further
studies. Parkinson's disease affects the part of the brain,
called the substantia nigra, where dopamine is produced. Function
Dopamine is a smooth transfer of impulses for
normal movements.


reduced production of dopamine in Parkinson's disease,
It interferes with the normal transmission of nerve impulses, and there are basic
Parkinsonian symptoms, such as: 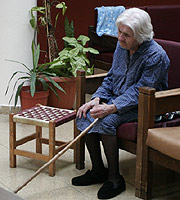 The sequence of appearance of certain symptoms can be different - in
some cases - shake, in others - stiffness and slowness
movements. Similar symptoms of Parkinson's disease may be at defeat
brain in hypertension and / or arteriosclerosis, after
injury (trauma or repeated) of the brain and some other
Chronic diseases of the brain.

In Parkinson's disease the symptoms first appear, and
Then there are more pronounced on one side of the body. In parkinsonism
another origin of these manifestations are often symmetrical and
combined with other symptoms of nervous system: violations
coordination, etc. sensitivity.

In addition to these movement disorders, in patients with the disease
Parkinson lost expressive facial expressions. Patients can look
indifferent, apathetic, but actually going through the usual
or that the situation as healthy people.

Involvement of speech motor muscles leads to disruption
speech - it can be a little modulated, illegible. Related
Sick people often get angry because they think the patient
casually utters phrases. This awkward situation can be overcome,
if loved ones will understand that he can not say otherwise.

In Parkinson's disease often occurs in patients with depression
state of mind (depression). This is due to two reasons: firstly,
the patient is distressed by the fact that it can not act as fully,
as before or at work or at home; secondly, in the nature of the disease
is damaged and those parts of the brain that provide a person
balanced mood.

Parkinson's disease - a chronic and progressive
disease. The disease is not contagious, that is not transmitted by
one person to another.