Meanwhile, stuttering is not physical suffering, notspeech defect, but a disease of the soul, deep suffering and suffering is no less than the most severe forms of mental illness. In addition to personal suffering, not file description stutterer is experiencing quite a few failures in public life.

Speech has such an effect on personalitya person who says that people with speech disorders are stereotyped as people with serious personality problems, although this is not true. One type of disorder is stuttering. This is a violation of the rhythm and smoothness of speech, causing difficulties in verbal communication. Each person has intermittent speech. In an ordinary person, 7-10 percent of the speech is interrupted. It happens in the form of repetition of separate words or phrases (sounds: e-e, mm, or interjection). However, when breaks in speech are more than 10 percent - this is a stutter.

While for most people itconsidered something self-evident, stuttering experiencing enormous difficulties in using the spoken language in everyday life. The world stutters 1 percent of the population or 60 million of the six billion people. For many everyday communication is a constant struggle.

Most often stuttering occurs at a young age,when speech automatisms have not yet been perfected. They contribute to the development of stuttering stress reactions (fright, death of a loved one, beloved animal, divorce of parents, family scandals, etc.), therefore, the causes of stuttering are always in childhood. Stuttering of speech can be like a speech disorder such as chanted speech, in which the patient speaks quickly, sometimes slowly, then loudly, then quietly - such a reprimand is characteristic of cerebellar disease and is otherwise called speech ataxia. True stuttering intensifies with excitement, weakens in a relaxed atmosphere, stuttering people sing well.

What happens when stuttering 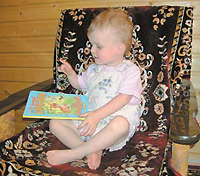 Stuttering is often accompanied by stress andanxiety. Interruption of speech during stuttering is different. In this case, repetitions of sounds or syllables, blocks of silence, unnatural stretching of sounds, grimaces of the face or tics are possible. If your child hesitates, repeats, or stumbles before pronouncing a word or phrase, take a closer look at it. Soft speech between the ages of two to seven years is the norm. But learning to understand and use speech is a long and complex process. Many children understand speech before they can express their thoughts verbally. Uncertain speech and repetition in children's speech are a variant of the norm. But if they occur too often and are associated with stress or avoiding behavior, this may indicate a starting stutter. The following symptoms indicate the initial stage of stuttering: