First aid in case of accidents at reactorplants or industrial facilities focused on the immediate evacuation of the victims of radioactive contamination in medical center, regardless of their state of health. Staff should wear respiratory masks and take a pill of potassium iodide.

First aid in case of accidents at reactor facilities

In accidents in experimental reactorinstallations where exposure is determined by the formation of a critical mass of lightning, strong stream of neutrons and gamma rays when the exposure of the affected organism lasts a split second, and terminates itself, personnel should immediately leave the reactor hall. Regardless of the state of health of all the victims were in this room should be sent immediately to the health center or directly to the medical unit, if it is a few minutes away from the accident site. In extremely severe lesions vomiting may begin within a few minutes after exposure and move to the car it would provoke. In this regard, if the hospital is not close to the scene of the accident, the victims can translate to and after the end of the primary reaction, leaving them vomiting in the offices of the medical unit. Affected with severe lesion should be placed in separate classrooms to view vomiting in one does not provoke it from another. After vomiting all victims should be transported to a specialized clinic.

Personnel actions in case of accidents at industrial enterprises 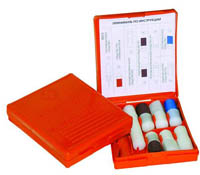 The explosions of nuclear and thermonuclear bombs, crashesin industrial units with the release of radioactive gases and aerosols, in connection with the release of unstable isotopes of action are somewhat different. Firstly, all staff should be as soon as possible to leave the lesion. For a sharp increase in radiation dose values ​​have extra second stay in a cloud of aerosols and gases. Many isotopes of radioactive gases and aerosols have a half-life measured in seconds, that is, they are "live", a very short time. This explains the seemingly odd fact a completely different degree of disease in people who have been in an emergency situation is almost next door, but with a little (they often unnoticed) the time difference. All personnel should be aware that is strictly forbidden to take up any items that are in the emergency room, you can not sit on anything in this room. Contact with objects heavily contaminated during irradiation, lead to local radiation burns.

In an accident the entire staff of the emergency building mustimmediately put on a respirator, as soon as possible to take a tablet of potassium iodide (or drink three drops of tincture of iodine diluted in a glass of water), as much radiation activity accounted for by radioactive iodine.

After leaving the emergency room affected thoroughly washed with soap in the shower. All their clothes are removed and subjected to dosimetry control.

Dress affected in different clothes. The duration of the washing and trimming of hair is solved according to the radiation monitoring. Everyone immediately give adsobar. The appearance of diarrhea shortly after the accident, associated with the intake of potassium iodide (it really can trigger diarrhea in some people). However, as a rule, diarrhea in the first few days after irradiation of the radioactive cloud caused by radiation injury of the mucous membrane of the gastrointestinal tract. Then, after postavnoki diagnosis of acute radiation sickness, treatment is prescribed.