How do chest compressions

Other
by admin
Massage of the heart, along with artificial respirationis the basic resuscitation procedures to restore normal human life in an emergency. The method is based on rhythmic external influence on the sternum of the victim with the aim to restore the contractile activity of the heart muscle. How to learn how to do chest compressions?

Features of the blood movement on the human body 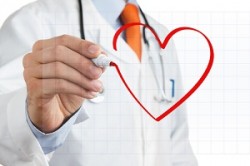 The two atria and two ventricles - fourhuman heart cavity. Of the vessels through the atrial blood enters the ventricles. Then the blood flow leaving the right ventricle, moving through the vessels in the lungs, and is the so-called small circle circulatoryAnd from the left ventricle into the aorta blood enters, all the organs and tissues forming the systemic circulation.

Within the pulmonary circulation is a natural gas exchange in the body, blood fills the lungs with carbon dioxide, and she takes out of oxygen when bound to red blood cells hemoglobin. Large circulation - the scope of the reverse gas exchange region and the concentration of micronutrients. The aortic blood metabolites comes from the tissues through the kidneys, lungs and skin.

It is not difficult to guess what will happen ifblood circulation in the body suddenly stops: the exchange of gases and nutrients immediately cease. As a result, the metabolic products will accumulate in the cells and blood oversaturated carbon dioxide. Due stopped metabolism occurs massive cell death from toxic and oxygen deficiency.

The value of the procedure for resuscitation therapy

In most cases, doing indirect, or closed, cardiac massage. Outdoor massage when the heart is squeezing his hand directly relevant at the open chest cavity during surgery.

Despite the fact that the chest compressionsdirect access to the heart muscle is not present, it is considered effective enough to return the man to life. The procedure is performed in such a way as to squeeze the heart and the sternum via the spinal column: under the pressure of the blood leaving the right ventricle and into the pulmonary artery and thence enters the systemic circulation vessels. Ultimately, in the brain and coronary arteries is restored full circulation, which causes independent rhythmic contraction of the heart. Indirect cardiac massage maintains a constant blood flow before clogged heart alone. The procedure is an excellent way to restore the heart's own electrical activity and normalize the functioning of the vascular heart.

When and who needs this procedure? 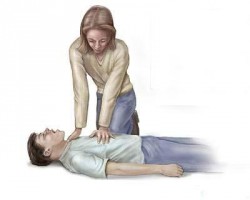 First you need to feel the pressing area. It is located at a distance of two fingers from the place xiphoid position on the center axis of the body vertical. Revives puts his hand on the base area of ​​pressure. Power pushes you need to double by second hands and the weight of his own body. Shocks must be operational and rhythmic. Making pushes on the sternum, remember that the optimal frequency of aftershocks pressing one second. When the rescuer pushes the hand must remain straight at the elbows. The rib cage should bend the victim at 4-5 cm.

The goal of these manipulations - fill the heartvenous blood of the victim. To facilitate this process, making the massage should take your hands off the breastbone after each push. At the same time the injured man lifted his legs with a roller. mymedinform.com notes that chest compressions do strictly vertical line, while producing 101-112 jolts per minute.

Features of this procedure depends on your child's age.

Babies do massage using padsthe second and third fingers, children adolescence - a brush of one hand. Adult man in cardiac stimulation is necessary to make sure that the thumb was aimed at the head or foot of the victim, that depends on which side of the victim is the rescuer. By pressing need to lift the fingers so that they do not touch the thorax. 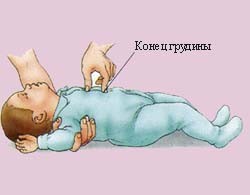 Technique chest compressions atsmall child following: grudnichka put back his head on a hard surface to the rescuer. Then press down on his chest with two fingers at the same time placing the thumbs on the sternum in the front. Two other fingers have under the baby's shoulders.

Kids who are not even 7 years old,chest compressions comfortable doing base of the palm, while being on the side of the victim. Have recently appeared on the infant light deflection of the chest should be about 1-1.5 cm in children under 1 year - 2-2.5 cm, in children older than 1 year - about 4 cm.

Do not forget that the number of tremors in the sternum for 1 minute depending on the frequency of the child's age and his heart. Based on this:

During the execution of chest compressionsthe person performing resuscitation, can alternate between two deep breaths (artificial ventilation of the lungs) with 15 jerks. It's quite an effective measure to restore the normal life of the affected organism. When this complex rehabilitation of the affected state is controlled by pulse frequency on the carotid artery, as well as on how the pupils react to bright light. Combining indirect heart massage and procedure artificial respiration light handy when resuscitation is carried out immediately 2 lifeguard. Their swift and concerted action prior to the arrival of doctors can save the life of the victim.

How long do you need to perform the procedure 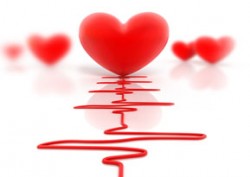 Stop to provide first aid (to give upchest compressions) is possible in the case when the patient is in a state of unconsciousness, it does not come to life. Generally, peripheral blood flow under the influence of chest compressions to normal within a quarter of an hour. If after this time the normal pulsation of the carotid and peripheral arteries is not restored, the pupils do not constrict, does not mark the breath and the sound of the heart, and the skin is different unnatural light or a bluish tint, massaging the heart indirectly stopped.