Other
by admin
Shockwave - a powerful force whose energycapable of exerting a beneficial effect on the human body. Shock-wave treatment mastered relatively recently. The first medicine "reining" invisible force waves in the 80-ies of the last century. Today wave treatment is successfully used in the field of orthopedics, traumatology, urology and cosmetology.

Musculoskeletal subject to variousinjuries and illnesses, regardless of a person's age. Today, about 80% of doctor visits by people of different age groups are connected with the prevalence of joint problems. The main causes of this disease are mechanical injuries, excess weight, the same type of repetitive stress, senile deformation.

The process of deterioration of the condition and operation of the joints,tendons and muscles is not always possible to stop the conventional treatment. The latest and most effective development in this field of medicine is a shock-wave therapy.

The essence of the shock-wave treatment 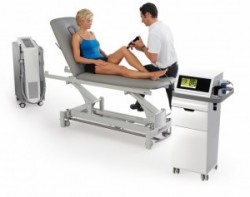 The shock wave belongs Infrasound spectrumand the human ear can not grasp its frequency (less than 16-25 Hz). Infrasound generate natural and man-made factors. The natural sources include storms, earthquakes, hurricanes, to man-made - wind power, transportation, and so forth.

From the sound shock wave characterized by highenergy amplitude and light duration pulse. Modern technology, which is used for UHT treatments, work, relying on the principle of the so-called cavitation, which operates on the border line between the media. liquids and soft tissues of the body Resistance acoustic wave is minimal, so the wave energy easily penetrates into the soft tissues without causing them any harm. Waves affect cartilage and bone, as well as the various seals, such as calcification and ossification. Treatment of shock-wave therapy helps to restore and develop the natural metabolism, to update all systems on the cellular level and improve the nutrition of tissues. 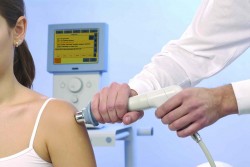 Treatment of shock-wave therapy can be hazardous to health:

In addition, a number of body segments,which can not be affected by acoustic shock waves. This bone growth places where the presence of a powerful energy from the outside can cause irreversible pathological skeletal development. Patients under the age of 20 years, UHT treatments not prescribed.

Also, the energy wave shield vulnerable lung tissue, the skull, the intestine and the large vessels.

Undisputed "plus" in the shock wave therapy -is the possibility of outpatient treatment without the forced change of the rhythm of life, to which the patient is accustomed. An exception may be called cases where the patient is strongly recommended to wear an orthopedic corset to avoid overloading the skeleton.

shock wave therapy method is also attractivelack of side effects and complications that can confront a patient after any invasive surgery. Procedures UHT (multiple sessions of 15 minutes) pass without anesthesia. The number of sessions and the duration of the course depends on the severity and duration of illness.

MirSovetov proposes to consider how the method of shock wave therapy on the example heel spurs.

Shock-wave effects on the heel spur

The official name of heel spurs - plantar fasciitis. It looks like injury scar in the upper part of the plantar ligament at the point where it is adjacent to the heel bone. 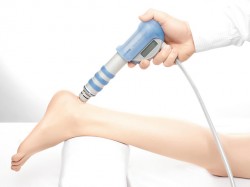 Spur declares itself sharp pains whenPeople rely on the heel. Gradually, fibrous tissue formed in its thicker with time calcium is deposited in the region of trauma. Its compounds are not soluble. These rough growths irritate the surrounding tissue, promote inflammation and, in fact, become the root cause of the characteristic pain.

On the x-ray portion of plantarfasciitis is so tight that it can be mistaken for bone tissue, which is a continuation of the underlying bone. It looks spur is a pointed spike, bump, beak or wedge. In the diagnosis of disease experts consider that at the initial stage fasciitis, when there are tears, but calcium deposits had not yet been formed, an x-ray is nothing "does not see."

The correction of heel spurs most effectivealternative operations recognized shock wave therapy. In the affected area a pulsed beam of powerful energy of sound waves. The beneficial effect is seen immediately: significantly reduced discomfort during walking, improves blood circulation and metabolism in the "sick" tissue is stimulated to restore them. In the opinion of the patients, the pain disappears immediately after the first session UHT.

Apparatus by means of which thewave effect on the body of the patient, and increases the force creates a shock wave that has special qualities. The whole course of treatment typically lasts 25-30 7 minutes duration procedures. Between sessions do breaks for 3-4 days. The result of this treatment is the development of all, without exception, patients with persistent positive effect complete elimination of pain impulses.

UHT equipment initially creates and storessound waves at a certain frequency, due to their exposure to the affected area begins a rapid recovery of dense tissue. In addition, it increases the permeability of the membrane of the cell walls, which effectively reduces inflammation and reduces swelling in problem areas.

In the struggle with plantar fasciitis methodshock wave therapy has become a real breakthrough. Earlier painful symptoms of heel spurs Cropped strong analgesics or radically solved the problem by surgery, a procedure SWT has now become the salvation for the 90% of patients who avoid surgery and get rid of the unpleasant build-up on the heel.