You're probably familiar with the word "lice". That's right: it is for this medical term is hiding such "shameful" disease as lice. However, as with any disease, lice have nothing to be ashamed of. Especially because of falling on his head he can each of us. And not only the head ...

Pediculosis or lice - a human infection by blood-sucking insects - lice.
Louse - the eternal companion of man. It is even mentioned in the Bible. Archaeologists have found the remains of an insect on ancient mummies. Almost 500 years BC Herodotus wrote that the Egyptian priests and scribes were always carefully shaved head, so that no lice or other impure creatures could not cling to them when they are gods. However, not only the priests, but also of the Pharaohs, kings and nobles in ancient Egypt, Babylonia, and Assyria, the head and chin were shaven. In Europe, lice outbreaks are regularly seen for 200 years. The peak incidence occurs in the early fall, when children return home from the camps and resorts.

Disease susceptible adult lice andchildren of both sexes, regardless of age and social environment. The big mistake is the belief that the lice - the result of uncleanliness. Studies conducted in Europe in recent years have shown that lice love clean hair and is not afraid of water. Moreover, it is able to swim well, and so you can catch head lice and in the pool. Also, pick up this disease can be anywhere: in a kindergarten or camp, school, transport, store and other places where large numbers of people. 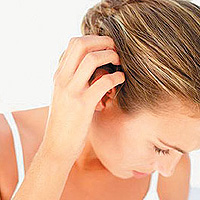 Although in nature there are more than 400 species of lice, only three species of lice can cause a person:
Head lice is pediculosis of the scalphead. It is the most common type of lice. Infestation with head lice can happen directly - by direct contact with an infected person healthy or through contaminated clothing, hats, hair brushes, combs. You can become infected even just in a strong gust of wind, which will take a few hairs insects. Head lice migrate when head contact, most often it occurs during childhood pranks. Outside the host head lice can live for 55 hours. Head lice can be seen with the naked eye or under a magnifying glass, but it is not easy to find. Lice are very mobile and constantly migrates over the surface of the scalp. It is easier to detect lice eggs - nits. They often can be seen in the temporal, occipital, and parotid regions. Unlike dandruff, which slips easily from the hair, the nits are held firmly, as they attach themselves to the hair root by adhesive secretions.

Pubic lice (ploshitsy) cause pubicpediculosis. They are larger than head lice prefer a moist environment, move a little. Infection is possible in close household contact - through a common bedding, towels, but sexually transmitted most frequently pubic lice.

Amazed, as a rule, pubic area, althoughSometimes these insects are found even in the eyebrows or beard. Pubic lice is easier to detect than the head, as it can be in one place for a few days.

Pediculosis corporis widely distributed intimes of great wars and mass migration, when people do not bathe or wash clothes. Cootie lives in the folds of the clothes and the body moved for a short while, just to eat. If the appearance of the head or pubic lice do not depend on the purity of the head or body, the presence of lice is often the result of untidiness, as it was in dirty clothes, the female lays eggs. You can become infected in crowded places where lice are transferred from one person to another. Cootie and exceeds the size of the head louse. It can be seen in the lumbar region, shoulders, neck, on the surface of the upper back, on the abdomen, in the armpits.

Of the three species of lice only cootiecan carry the infection. She carries pathogens typhus. Therefore, the epidemic of the disease is also more likely to be used in warfare. As for head and pubic lice, they are not carriers of the infection. However, the parasitism of these insects cause itching, and when a person is afflicted with lice, itchy, then he scratches appear, which can then become infected. Therefore, it is important to get rid of the pests immediately after their discovery.

And - very important prevention: personal hygiene, frequent washing of the head and the body, a regular change of linen and clothes. The regular inspection of people in their places of forced accumulation or long-term stays (hospitals, child care centers, schools, kindergartens, dispensaries, etc.) Is necessary as a social prevention.

Therefore, after the summer holidays not too lazy to examine your children for head lice, that there was no unpleasant moments during the annual examination at school or kindergarten.