Home>Pediatrics>Children with Down syndrome. Features of social adaptation. Part 1

Children with Down syndrome. Features of social adaptation. Part 1

Down's Syndrome - a serious incurable chromosomaldisease. How does the disease, how to inform relatives that the baby developmental disorders and the help to the kid? Legal norms of children with Down syndrome. 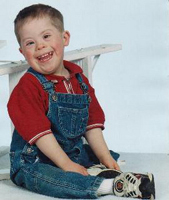 What is Down syndrome?

The word "syndrome" refers to a set of attributes or features.
The name 'Down' comes from the name of the physician John Langdon Down,
who first described the syndrome in 1866. In 1959
French professor Lejeune showed that Down's syndrome is associated with
genetic changes.

The human body is made up of millions of cells, and
each cell contains a certain number of chromosomes. Chromosomes - it
tiny particles in cells carrying coded information accurately
all heritable traits.

Typically, each cell 46 is
chromosomes, half of which the person receives from the mother and half - from
father. A person with Down syndrome in the 21st pair of chromosomes has a third
extra chromosome, as a result of 47.

Down syndrome occurs in
one of 600-1000 births. The reason that this occurs,
It has not yet been elucidated. Children with Down syndrome are born to parents
belonging to all social classes and ethnic groups, with the most
different levels of education.

The probability of the birth of the child
increases with maternal age, particularly after age 35, but
Most children with this disease still are born to mothers who did not
below that age.

Down's Syndrome can not be prevented and it can not be cured. But
thanks to recent genetic research now about
functioning chromosomes, especially about 21 minutes, much more is known.
Achievements allow scientists to better understand the typical features of this
syndrome, and in the future they may allow improved
health care and socio-pedagogical methods of support such
of people.

As recognized by the Down's syndrome?

The presence of Down syndrome is usually detected shortly after birth
child as a doctor, nurse or parents exhibit characteristic
features. And then be sure to chromosomal tests are carried out to
confirm the diagnosis.

The child corners of the eyes are slightly raised, his face looks a little
flat, the mouth a little smaller than usual, but the tongue - a little more.
Therefore, the baby can poke it - a habit gradually
You can get rid of. The palms wide, with short fingers and lightly
bent inwards little finger. The palms can be only one transverse
fold. There is a mild muscle flaccidity (hypotension), which
It passes when the child gets older. The length and weight of the newborn
less than usual. 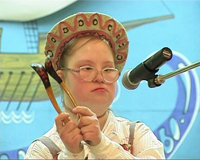 The extra chromosome affects the health and development
thinking. Some people with Down syndrome can be serious
health disorders, others - minor.

Some diseases occur in people with Down syndrome are more likely
such as: congenital heart disease, some of which are serious and require
surgery; hearing deficiencies are common, and more
often - view, quite often there are thyroid disease, as well as
colds.

People with Down syndrome are usually of intellectual disability in varying degrees.

Development of children with Down syndrome can be very different. As well as
ordinary people, as adults, they can continue to learn, if they
given such an opportunity.

However, it is important to note that, as each
an ordinary person, it is necessary for each such child or adult
treated individually. Just as it is impossible to predict
development of any child, there is no way to predict the development of
baby with Down syndrome.

All parents who have experienced this moment, said that experienced
terrible shock and a reluctance to believe the diagnosis - as if this was the end
Sveta. At this point, the parents are usually terribly frightened, and
it seems that they want to escape from this situation.

Some parents try not to face the truth, hope,
that there was an error that chromosomal analysis was performed improperly,
and at the same time they may be ashamed of such thoughts. This is - a natural
reaction. It reflects the common aspiration of all people to hide from
a situation that seems hopeless.

Many parents fear that
birth of a child with Down's syndrome in some way affect their
social status, and they fall in the eyes of others - people who gave
life of a child with impaired mental development.

To return to its normal state, to start
daily activities, to establish habitual communication requires more than one month.
Perhaps grief and sense of loss will never disappear completely, and,
However, many families are faced with this problem,
evidence about the beneficial effects of such an experience.

They
I felt that life took on a new, deeper meaning, and became
a better understanding of what's really important in life. Sometimes this
crushing blow invigorates and unites the family. Such an attitude towards
favorable situation all affect the child.

Some parents recognized their reluctance to approach the
newborn. However, at some point, they overcome their doubts
and fears are beginning to consider their baby, to touch him,
take it to the handle, take care of it; if they feel that their baby
especially infant and much more like than unlike, other
kids.

Coming into contact with a child, Mom and Dad feel better than its "normal". Parents usually try to quickly get acquainted with
the individual characteristics of the newborn.

Each family is required different times in order to feel
I am doing well with the child. The feeling of sadness may appear again, especially
when some circumstances remind parents that their child with
Down's syndrome is not able to do what they know how its conventional peers.

How to inform others

Upon learning that the baby Down syndrome, parents often can not immediately
decide whether to report about it to relatives and friends. In any case, native,
friends and acquaintances will see that the child looks a little unusual, notice
stiffness and the sorrow of parents.

They talk about zavedut newborn and
it may cause embarrassment or even make relationship
strained. The conversation, though painful, can be an important step for
parents returning former self-confidence and peace of mind.

In turn, the friends and family do not always know how to
to respond to such a joyless tidings. They are afraid to offer help,
that it was not regarded as interference in the affairs of others or idle curiosity, waiting for some sign that their presence is desirable and
assistance may be helpful.

Sometimes the relationship crumble if
parents are waiting and do not receive proof of the former location of loved ones
to yourself. The most reasonable in this situation - to start business, usually
following the birth of a child: normal, common courtesies
will help parents feel better.

During this period, grandparents may require a separate
help. Their attention focuses on the adult children - parents
toddler, and they painfully ponder how to protect them from stress.

The conversation with the brothers and sisters of the newborn

If Down syndrome is born the youngest child in the family, in front of
parents arises another problem: what to say to their older children.
There is a natural desire to protect them from adult grief.

Often
parents overestimate their children's sensitivity to the experiences of
adults and their ability to notice anything unusual in appearance and
neonatal development. However, experience shows that it is important to them
to talk as soon as possible.

How to help your child?

Parents of children with Down syndrome, just like all mothers and
Pope concerned about the issue: what the future of their children? What are they
They wish for their children?

To learn how to interact with ordinary people so
as it should, a child with Down syndrome should attend a regular
public school. Integration into mainstream school will give him the opportunity to
learn to live and act in the way it is accepted in the world around him.

Integration can be different. A student can spend the entire school
Day in the regular school setting, while it is
necessary assistance: special teaching aids are available, with him
engaged additional staff, special prepared for him
(Individual) curriculum.

Or, even though the child's primary learning environment
is a common class of the time the student can spend in a special
class. The number of hours spent in a special class,
It is set in accordance with his individual needs and
He agreed with the parents and school personnel in the process of
drawing up an individual training program.

Many educators and parents believe that children with disabilities
capabilities, regardless of the type of violation, should visit those schools,
who walk in the children living in the neighborhood. If the child's carry in
some other school, he immediately becomes in the public eye is not
like everyone else. Also in this case it is much more difficult to establish
good relationships with their peers and find friends among them.

The right of children with Down syndrome, as well as other children with disabilities
opportunities to maximize social adaptation, that is,
Seen ordinary kindergarten and schools are fixed in Russian
legislatively1.

1According to the Convention on the Rights of
Child (approved gene. Assembly on 20 November 1989.)
ratified by the Decree of the USSR Supreme Soviet on June 13, 1990 №1559-1, «disabled children with intellectual disabilities, including children with
Down syndrome, children with multiple mental and physical disorders,
have the right to receive an education and rehabilitation in terms of social integration in the most general or special system (corrective) education. "

In accordance with para. 1, Art. 16 of the Law "On Education" bodies
Education Management provide a "welcome all the people who
reside in the territory and have the right to education
the appropriate level. " At the same time, parents have the right to "choose the form of education, educational institutions" for their children,
article 1 paragraph. 52 of the RF Law "On Education".