Home>Pediatrics>Frequent acute respiratory viral infections in a child: why and who is guilty?

Frequent acute respiratory viral infections in a child: why and who is guilty?

"Often ill children" - the medical term is usually used in reference to an infinitely kids have a cold. How dangerous SARS in children? Who is guilty of frequent acute respiratory viral infections in a child? 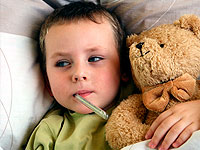 "Often ill children" (FIC), "often longill children "(CHDBD) - these medical terms and abbreviations commonly used by pediatricians in relation to the infinitely kids have a cold. This is not a diagnosis, not the disease, scary-sounding expression for each parent, only indicate that a child is in the dispensary and in need of special health monitoring. Who are CHDBD? How many "should be" hurt the baby to fall into the FIC group?

Who are the FIC?

For every parent who loves a cold baby -a real tragedy. Two - three cold during the winter for a doting mother - that's a lot. But pediatricians there are strict framework for the frequency of ARI (acute respiratory viral infection) in children.

A child is considered to be frequently ill,

By the way, foreign children's doctors in the US andUK easier refer to SARS in children and is considered absolutely normal, if a child under the age of three has a cold 6 times a year. If the baby is in kindergarten, he was "allowed" to pick up the virus by 8-10 times a year.

Why do children suffer more adult?

We adults, we carry far unhealthylife is constantly in contact with the virus, but are sick of SARS in the middle a couple of times a year. Why children are frequent colds? SARS in the child - it is the law of life, it has been and always will be.

A child is born with an immature immunesystem. He has no immunity to a large number of infectious agents. It is natural that when faced with new viruses and germs, the baby gets sick, but the disease is good, because at the time it is just formed immune protection. The child must be ill SARS, to perfect his immune system.

Nature has done everything to ARI and ARI in childrenproceeded as easily as possible. So it is usually the body baby cope with the infection on their own, his power is enough to neutralize respiratory viruses. And each time during his illness he trains to win a more serious enemy if necessary. The time will come and parents forget about the frequent acute respiratory viral infections in children.

Who is to blame if the child gets sick often?

Why does one child has seldom, and all otherduring a cold? Who is to blame in that first a stuffy nose, then an ear ache after a sore throat and hoarseness a cough, and when it seemed that everything comes back to normal, once again the temperature rises. "Weak" - is usually said in such cases, implying decreased immunity.

Just say that congenital immunodeficienciesoccur very often. Besides, they do not appear frequent SARS, but severe infection, the emergence of deadly bacterial complications. Too frequent colds in children - this is a consequence of the secondary low immunity, that is born a normal child is under the influence of some external factors becomes "weak". In other words, a baby there is a conflict with the environment in which he lives. Grandma grass, all kinds of drugs, dietary supplements are unlikely to help reconcile the baby's immune system to the outside world. Anyway, before you get involved in the child's immune system, you need to try to change their environment and way of life.

Formation of immune defense system occurs,First of all, under the influence of external factors: the nature of power, the degree of purity of air, the quality of clothes depends on physical activity, recreation, concomitant disease. The child is too small for that to change something yourself, so it is frequent colds entirely on the conscience of the parents.

Often parents embarrassed insistencepediatrician tempered child. "What is hardening, it is so frail!" However, the magic pill to strengthen the immune system does not exist, if all the time to give to drink a decoction of baby herbs, vitamins stuff, coddle, sit at home, he will not get sick less often. There is a real program to prevent SARS in children, advice for parents, as it should be. This will be discussed in the next article.