The attack of asthma in the child's naturalIt causes a storm of emotions in the parents. Despite the fact that sometimes it ends spontaneously, pediatrics standards require the use of emergency funds in bronchial asthma. asthma School for parents to teach how to make life easier for the child and help him cope with the disease.

Bronchial asthma - a chronic diseasebronchi, often occurs in children with allergies or respiratory tract infections. The main manifestation of the disease are the bronchial obstruction caused by spasm, edema of the bronchi, the increase in production of thick, viscous mucus, airway plugging gaps. The mechanism of development of bronchial obstruction include immunological and non-immunological reaction based on innate and acquired hypersensitivity of the bronchi.

Help with asthma during the attack

Home attack of asthma in the childIt can be sudden, but usually it is preceded by excessive secretion of mucus from the nose, itching and redness of the eyes, cough, headache. School of asthma teaches parents to see harbingers of attack and prevent it with the help of available funds.

During asthma attack the childHe looks frightened: pale face, lips cyanotic, the skin is covered with cold sweat. The lack of air compression in the chest, shortness of breath and cough are forced to take a forced situation, often sitting, with an emphasis on hands. A child catches a mouth air, barely talking, nostrils flaring with each breath, breathing involves not only the respiratory muscles, and the muscles of the shoulder girdle, back and abdomen.

In addition, emergency care in bronchialAsthma involves creating a secure environment and ensure the free inflow of fresh air. Child must be to reassure, seat or bed, put a pillow. As a home remedy for asthma is recommended hot foot baths, lasting 10-15 minutes, providing a reflex bronchodilation and reduced edema.
In asthma schools teach thatan asthmatic attack in a child can last from a few minutes to several hours. He can not be serious, but parents should not doubt the need for urgent remedial measures. Of course, bronchospasm may pass on their own, but the canons of asthma therapy is not allow to stretch the suffering of the patient, the condition can worsen at any time.

Help with asthma attack is. That depends on the doctors? 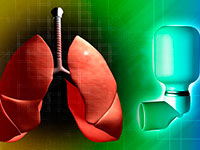 When docked attack, treatment of bronchialAsthma goes to the rank of basic therapy, carried out by a step circuit. The basic tools in asthma include anti-inflammatory, anti-allergic, bronchodilator drugs. Commonly used methods of physical therapy, reduce inflammation, eliminate residual bronchospasm, helps cleanse the bronchi. Particular attention to in order to help the child's immunity in asthma it is important to stimulate protective mechanisms, thus reducing the bronchial hyperreactivity.

The most important component of basic therapyasthma is allergen-specific immunotherapy, or as it is called in the "allergy vaccination" people. The goal of treatment is to reduce the reactivity of the bronchi to the action of specific allergens that cause asthma attacks. It held an allergist in autumn or winter, and the effect of the therapy, the higher the earlier it is started.

Healthy environment and lifestyle as a means of bronchial asthma

That depends on the child's parents? In addition to the basic treatment and medicines for asthma for the child it is important to create a healthy living environment.

The school asthma learn how to reduce exposure to allergens.

It is important to stay in the open air,except for hot days, windy weather, when the air is full of allergenic pollen. Physical activity in schools is permitted, in bronchial asthma useful exercise. But parents need to know that at the beginning of training can reflex bronchospasm, so it is recommended to inhale the medicine before the studies. When physical activity spontaneously expand the bronchi, the effect is very useful for patients with asthma.

Asthma can not be cured, treatment is to reduce the frequency of attacks, reducing their severity, a large percentage of cases of children held their own as they grow older.