Some children are different from others. These differences are usually due to CNS during a difficult birth. Parents are starting to worry about, as a rule, in the second year of the baby's life, when it becomes clear that it is well behind their peers. The discovery that their most beautiful and beloved kid is autistic traits, it is for them to shock. What to do?

What is alarming in the child's behavior?

These
Children differ in propensity to ritual actions: their favorite activity
put in a number of machines, they can perform actions with toys
typical for younger children (suck, chew on the toy, beat
it on the floor), there are no elements of role-playing games, which should appear in the
the age of 2 years.

Kid makes strange behavior, which seemed to soothe him. He can sway of Sauron in the side, run around, tear the paper. These actions are not meaningful. 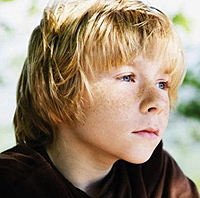 Parents think that their baby does not
I understand what they say. The child does not respond to adult requests
It did not seem to hear them. The skills of self-service for a long time delayed,
the child can not drink from a cup, not mastering the pot.

Half of these children and
It remains at the stage of profound mental retardation. But some of them
- Gifted and talented. But it is very difficult to learn anything this
kid, he can not concentrate on what he is told,
He throws the book, escapes or starts to cry. For a healthy
child, adult - this is his world, for an autistic child is more important
minute, extraneous influences. It seems that communication with itself
adult child painful and unpleasant.

Many of these children are aggressive,
active, often they can not soothe. Some, on the contrary, are passive and
silent, very poorly responsive to the surrounding. These children
no joyful, emotional communication with adults, he seems to be
"Pushes" the mother, not letting into your inner world.

Interestingly, before the occurrence of autism linked from
Family background. "No one does with a child", "dysfunctional
family ", these formulations were applied deeply traumatized by the
parents.

Autism often occurs even more frequently in intellegentnogo families where the mother devoted to her baby, and very fond of him. Therefore, it is necessary to find out what is the cause of autism?

Why there early infantile autism?

Most likely, the reason
Autism in an organic lesion of the central nervous system. That is, during delivery or
pregnancy child lacked oxygen, leading to
disorders of the nervous system. There is a version chtto
RDA occurrence associated with vaccination.

Fortunately, one hundred percent of autism is rare. More common children who have certain traits of autism are expressed.

These children can be helped, the main
no time to lose. Family when it detects signs of disease should
to hold an urgent examination of the child and deal with it 24 hours a day. In this scenario, if a child autistic traits are not strongly expressed, the problem will be solved definitely.