The causative agent of infection in paraproctitis inmost cases is mixed microflora. Most often found Staphylococcus and Streptococcus in combination with E. coli, Proteus. Often (especially in ulcers pelviorektalnogo space) detected the presence of Bacteroides, peptokokki, fuzobakterii relating to Non-spore anaerobes. Acute abscess caused by mixed microflora, usually referred to as a simple, banal. Specific infections (tuberculosis, actinomycosis, clostridia) - a rather rare phenomenon. When paraproctitis, especially chronic, it is necessary to rule out TB infection.

Contributing factors of purulent process are: 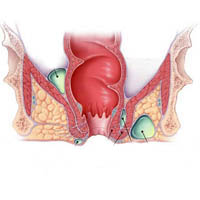 Microabscesses caused due to inflammationglands, initially localized in the crypt, and does not extend beyond the internal sphincter, and under favorable circumstances can to empty through the crypt. At this stage, the disease can be regarded as a crypto. But if the abscess extends deep into, t. E. Mezhsfinkternoe in space, then it's abscess. According partitions mezhsfinkternogo space pus can go in different directions, causing the formation of ulcers in the broader adrectal cellular spaces.

According to the localization of abscess are distinguished:

Localization crypt involved in the processinflammation, abscess may be back, front or side. In the first place it is back on the frequency of abscess, the second - the front, less often affects the crypt on the side walls. More frequent loss of crypts at the back wall can be explained by the fact that the rear of the crypt deeper and worse drained, they are more often injured solid feces due to the rigid fixation of the bowel wall at the back of the semicircle, as well as the fact that the rear crypts offer much more ducts anal glands.

Another important element in the development chainacute purulent abscess is a course on which the pus from mezhsfinkternogo space falls into the more remote areas. Localization of this move is crucial when choosing the method of operation. The fact that the pus from the intermuscular space can get into another cellular spaces, bypassing the external sphincter of the anus or passing through it. The following options are available: stroke is located inwards from the outer pulp, the process goes through the subcutaneous portion of the sphincter, through the deeper layers - superficial and deep portion of the muscle, the course goes around the sphincter to the lateral side - ekstrasfinkterny move.