Home>Psychiatry>Causes and symptoms of narcolepsy

Causes and symptoms of narcolepsy

Narcolepsy is very easily mistaken for mentalfrustration, too many different manifestations of a disease. Meanwhile, it's just a sleep disorder that lately more common. Read more about the causes and manifestations of narcolepsy read the article.


One of the 2,000 people suffers from narcolepsy. The disease has a significant impact on human life and even makes it invalid. These facts about narcolepsy, you may not know, but if you suffer from this disease, then imagine how serious this problem is.

Narcolepsy - sleep disorder, manifestedconstant sleepiness and a tendency to sleep at inappropriate times. In narcolepsy, the person usually suffers from "attacks" of sleep, as well as experiencing constant sleepiness and fatigue that persist despite any sleep duration. Unrecognized and uncontrolled narcolepsy may very negatively affect the quality of life of the patient.

Recent advances in medicine, technology andPharmacology help doctors diagnose and treat this disease. Although the method of treatment of narcolepsy has not yet been found, most of the people suffering from this disease, can lead almost normal lives with appropriate treatment.


The cause of narcolepsy

Although the exact cause is not known, narcolepsy,apparently is a disease of the brain that controls the process of sleep and wakefulness. Cataplexy and sleep paralysis are similar to the loss of muscle tone that accompanies a normal dream. However, in patients suffering from narcolepsy, these phenomena (loss of muscle tone and a feeling of dreams) occur at the wrong time.

Psychiatric and psychological problems are notThey are the cause of narcolepsy. Sometimes the occurrence of narcolepsy runs in families. At the same time, many people with narcolepsy have a similar disease relatives. Recent studies in patients with narcolepsy was found to decrease the level of a brain chemical ingredient - hypocretin. Some researchers believe that the problem is related to the gene responsible for the production of hypocretin. The combination of genetic disorders with the factors of personal life can lead to disease.

The most common symptoms of narcolepsy appears as follows:

In most cases, excessive daytime sleepiness - the most distressing symptom. The symptoms of narcolepsy can appear all at once or develop gradually over many years. 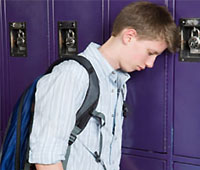 Cataplexy is usually triggered by strongemotions such as laughter, anger or surprise. Excessive daytime sleepiness is present in all patients with narcolepsy, and is usually the first symptom. People with narcolepsy, they say that they feel constantly tired or drowsy. They tend to fall asleep not only in situations in which many people feel a natural drowsiness (after a meal or during a boring lecture), but also when most people are still awake (during the conversation, when writing emails or watching a movie). These sleep episodes are usually brief and refreshing only for a short period of time. People with narcolepsy can fall asleep or feel blurred consciousness in a most unusual time, even in dangerous situations, such as when driving a car.

Attacks of cataplexy - a sudden, short-termloss of muscle tone - sometimes the first symptom of narcolepsy, but more often develop months or years after the onset of drowsiness. Cataplexy may be mild, manifesting momentary sensation of weakness in the knees, or may cause a complete collapse of the Physical, leading to a fall. Persons who have such attacks occur, are in a state of wakefulness and understand what is happening. Cataplexy is usually triggered by strong emotions such as laughter, anger or surprise. Some attacks can be caused by individuals just memories, anticipation emotion or situation that causes anxiety.

Sleep paralysis - and short-term lossmuscle control, but it occurs at the moment of falling asleep or upon awakening. The patient may, to some extent aware of what is happening, but unable to move or speak. Sleep paralysis can be intimidating, but it is not dangerous.


Other symptoms of narcolepsy

Automatic behavior - is the fulfillmentPatients usually tasks without awareness of their actions. Sometimes the patient may actually sleep and continue to work, but do not remember it upon awakening. Automatic behavior can be a symptom of narcolepsy and is a threat if a person performs potentially harmful actions, such as driving or cooking.

For persons suffering from narcolepsy, oftenproblematic as a watch during the day and sleep at night is good. In such cases, daytime sleepiness is enhanced with plenty of nighttime awakenings.

Individuals with narcolepsy often reportthe following symptoms: double vision, inability to concentrate, memory loss and headaches. Children with this disease often lag behind their peers in physical development and learning. Adults may not be able to perform daily tasks at work.

If you find yourself in any of the abovesymptoms of narcolepsy, and believe that these symptoms affect your ability to manage transport to go to school, to perform normal daily activities, or if these symptoms interfere with your social activities and personal relationships, then for you it is important to consult a professional in matters of Sleep Medicine.