The main symptoms of streptococcal

Streptoderma arises as a result of defeatskin bacteria of the genus Streptococcus. The main symptom of streptococcal are pink spots, prone to flaking. Spots are round, their diameter reached 3-4 cm.

The concept of streptococcal

Simple deprive a person referred to as an atypical formstreptococcal impetigo. It is more common in children, usually in the spring or fall. The groups of children the disease may take epidemic. His appearance contributes to non-compliance with the rules of hygiene skin care, poor skin dryness after washing. On the skin of the cheeks, chin, nose, trunk rarely sometimes slightly reddened, there are round or oval areas defurfuration white.

In some cases, they merge, formingkrupnofestonchatye pockets. Often close to the permitted foci observed new foci of the disease. Chance of light itching. Under the influence of the sun's rays can pass the disease, but the skin on the affected areas tan less that cause secondary leucoderma. Treatment is carried out on an outpatient basis dermatologist. Assign ointment with antibiotics.

Chronic diffuse streptoderma orstreptococcal epidermitis, localized mainly in the limbs skin, women around the nipples, and under the breasts. Characterized by one-sided defeat, sharp focus border, typical strep phlyctenas (bubbles) on the surface and near the hearth, thick greenish-yellow crusts and erosive wet surfaces formed after opening the conflict. Cutaneous manifestations are characterized by a tendency to peripheral growth.

The disease is prolonged. Often there is a strong itch. Treatment is carried out by a dermatologist. Antibiotics, topical disinfectants (aniline dyes, antibiotic ointments). 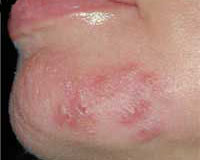 streptoderma Treatment includes the use ofTopical formulations, which include antiseptics, antibiotics and antiinflammatory drugs. If the disease is chronic, the treatment of streptococcal is based on an integrated approach.

Comprehensive treatment of streptococcal meansthe use of immunotherapeutic treatments, as well as the elimination of a variety of related ailments. In rare cases, patients with streptococcal inoculations prescribed by streptococcus.

After skreptodermii stains often remainRed. Typically, spots are located on the ground, diseased over time. Some special red spots treatment is not carried out. The only thing that should be done - it is completely exclude the possibility of any mechanical damage and refuse from sun exposure.

The most important thing in the process of treatment in streptococcalchildren - this is the right skin care of the child. Moreover, attention should be paid not only to the skin, located directly in the lesion, but also take care of the skin, the disease is not directly affected.

If a child is sick streptoderma, then bathe himIt should be as small as possible. The skin surrounding the lesion, must be treated with disinfectants. In those cases where the affected hairy part of the head of the newborn, the use of solutions containing alcohol is contraindicated, because alcohol can penetrate the baby's head through the fontanelle.

On the surface of the lesion is appliedsolutions, including antiseptics. Also on the affected skin is applied antibacterial toothpaste and ointment, such as erythromycin and gioksizonovuyu. The best results of treatment streptoderma children were obtained from the use of a complex of the drug, which simultaneously has antibacterial, anti-inflammatory and antifungal activity.