The concept of transplantation 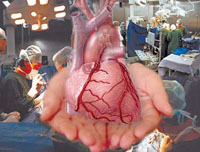 Organ transplant (transplant) - this exemptionviable organ from one individual (donor) to transferring it to another (recipient). If the donor and recipient belong to the same species, they talk about the allograft if different - on xenotransplantation. In cases where the donor and the patient - Identical (identical) twins or members of the same inbred (ie resulting consanguineous mating) line of animals, we are talking about izotransplantatsii.

Xenophon and allografts, as opposed toisograft undergo rejection. rejection mechanism - surely immunoassay similar to the body's reaction to the introduction of foreign substances. Isograft taken from genetically related individuals are usually not rejected.

In experiments performed on animalstransplant almost all vital organs, but not always with success. The vital organs - those without which the preservation of life is almost impossible. Examples of such bodies may be the heart and kidneys. However, a number of organs, for example pancreas, and adrenal glands, usually not considered vital since the loss of their function can be compensated for replacement therapy, particularly in the introduction of insulin or a steroid hormone.

Man transplanted kidney, liver, heart,lungs, pancreas, thyroid and parathyroid glands, the cornea and spleen. Certain organs and tissues such as blood vessels, skin, cartilage or bone transplanted in order to create the framework on which the recipient may form new tissue.

Organ transplantation has been one of the mostoutstanding and promising scientific achievements of the 20th century. Prolongation of life by replacing damaged organs previously seemed like a dream, a reality. Today, thanks to advances in modern medicine possible kidney transplant, liver, heart, pancreas, and other organs.

Not surprisingly, the problem of transplantauthorities focusing on the kidney. The kidneys - paired organ, and one of them from a living donor can be removed without causing him chronic renal impairment. In addition, the kidney usually fit one artery, and the blood flows away from it for a vein, which greatly simplifies the procedure of recovery of its blood supply from the recipient. Ureter through which flows off the urine formed in the kidney, can in some way be connected to the recipient's bladder.

The first kidney transplant in animals carried out in1902 Austrian researcher E.Ulman. Although at the time of the recipients did not receive funds, suppressing resentment, one of them lived after the transplant for almost 6 months. In these first operations kidney transplanted on the thigh (heterotopic transplant), but then have been developed for transplantation to a more natural place for it - in the pelvic cavity. This technique is generally accepted today.

In 1954 for the first time at the hospital Brigham transplantedkidney from identical twins. In 1959 there have carried out a kidney transplant from fraternal twins for the first time successfully worked on drug rejection reaction, showing that the start of the reaction is not irreversible. In the same 1959 it was used a new approach. It was found that a number of tools that block cell metabolism, and received the name of anti-metabolites (eg, azathioprine), have a powerful effect of suppressing the immune response. Experts in the field of transplantation of tissues, especially the kidneys, quickly took advantage of these data, which marked the beginning of an era of immunosuppressive drugs in transplantation.

Applying immunosuppressive agents, manyclinics have made significant progress in extending the functions of the kidneys transplanted to man. About a quarter of the ongoing donor kidney transplants are living close relatives of the patient, voluntarily give one of his kidneys. In other cases, use a kidney from recently dead people, although occasionally and those who, for whatever reasons, shows its removal, or volunteers who are not relatives of the recipient.

Short-positive transplantkidney is usually observed in more than 75% of patients who have this surgery is performed in connection with the irreversible loss of kidney function. Such a good result is achieved due to tissue typing and the use of combinations of immunosuppressive agents, particularly cyclosporine and corticosteroids.

Success is now estimated duration (a year orseveral years) survival or function of the transplant recipient. Although many patients live and stay healthy for more than 10 years after kidney transplantation, the exact date is unknown preserving the viability of the transplant.

Although experiments in liver transplantationcarried out since the mid-1960s, this organ transplant man have been held recently. Because the liver - the body gypsy, the only source of the graft may be a recently dead bodies of healthy people, with the exception of children - has experience in liver transplantation of a part of a living donor (a parent).

Technical problems associated with the impositionanastomoses (i.e. connections between vessels and ducts) is also more complex than for a kidney transplant, may be less secure, in this case, and the use of immunosuppressive agents. Not yet and hardware similar to an artificial kidney that could support life of the recipient prior to transplantation of the liver or in the immediate postoperative period until the graft has not yet begun to function normally. Nevertheless, the use of new immunosuppressive agents, particularly cyclosporin, led to substantial progress in liver transplantation - within 1 year transplants successfully operate in 70-80% of cases. A number of patients with liver allografts functioned for over 10 years.

The first successful heart transplant was performedDr. K.Barnardom in Cape Town (South Africa) in 1967. Since then, the operation is performed repeatedly in a number of countries. Generally associated with it the same problems as in the transplantation of other organs unpaired (particularly the liver). But there is more. Among them - the high sensitivity of the heart to the lack of oxygen, limiting the period of storage of the donor heart in just a few hours.

Furthermore, due to material shortagestransplantation, many in need of her patients die before they manage to find a suitable donor. However, there are good prospects for solving these problems. To create a device temporarily supporting the work of the heart and increases the life of the patient awaiting a heart transplant. Modern methods of immunosuppression provide one-year graft survival in 70-85% of cases. More than 70% of patients after a heart transplant, restored ability to work.

The transplantation of other organs

Transplantation of the pancreas is madeorder to suspend the development of serious complications of diabetes. In cases where one of the complications of renal failure was sometimes performed transplantation of pancreas and kidneys simultaneously. In recent years, the number of successful pancreas transplants considerably increased and reaches 70-80% of cases. Method also tested entire gland transplantation, but only its islet (insulin-producing). The method involves the introduction of these cells in the umbilical vein, that is, probably, he will avoid abdominal surgery.

brain transplant is currently faced with insurmountable difficulties, but change some of its segments in animals have already been implemented.

An important factor is the constant progress in the field ofkidney transplantation - improvement of methods of artificial replacement of renal function, ie, Development of artificial kidney. The ability to maintain a long life and health of a future recipient (suffering from severe renal insufficiency, which was supposed to lead to death) to a great extent determine the success of kidney transplantation. These two methods, dialysis and transplantation, complement each other in the treatment of renal failure.

Similarly, the development of permanent or temporaryimplantable artificial heart devices that can help the work of the recipient's own heart or completely replace it, should alleviate many of the problems associated with a change of heart. However, replacement of the artificial device of such a complex organ as the liver, appears to be unrealistic.

The difficulties associated with the preservation of cadaverauthorities, forced to think about the possible use of xenografts, such as bodies of baboons and other primates. However, there is a strong genetic barrier than of human organ transplantation, which requires much higher doses of immunosuppressive drugs to inhibit rejection reaction and, in turn, can lead to the death of the recipient from infection.

In any vital organ, designedtransplant if he permanently deprived of blood and oxygen, irreversible changes occur, that do not allow you to use it. For the heart this time measured in minutes, for a kidney - the clock. To develop ways to preserve these organs, after they are removed from the body of the donor spent great efforts. Limited but encouraging progress can achieve by cooling bodies, supply them with oxygen under pressure or chilled perfusion buffers, preserving tissue. Kidney, for example, can be stored in such an environment outside the body for several days.

Preservation of bodies increases the time allottedthe selection by the recipient of the compatibility of samples and provides the suitability of an organ. The framework currently existing regional, national and even international programs produced by harvesting and distribution of cadaveric organs that allow them to make optimum use. Nevertheless, the organs for transplantation is not enough. It is hoped that when society is more aware of the need for such bodies, their lack of decline, and the transplant could be carried out quickly and efficiently.