Home›Endocrinology›Addison's disease, symptoms and their manifestation

Addison's disease, symptoms and their manifestation

Symptoms of Addison's disease or «Bronze Disease» associated with the defeat of the adrenal cortex, resulting in a decrease or termination of cortisol hormone secretion. Read more about the manifestations of the disease - in the article. 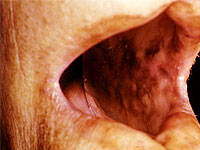 Addison's disease should be considered as chronic insufficiency of adrenal cortex, otherwise hypocorticism, a state that meets is quite rare, can develop both men and women, usually aged 30-50 years. In this disease, the loss of adrenal ability to produce the required number of cortisol hormone is noted. The name of the disease is given by the name of the British therapist for the first time described it, t. Addison.

Addison's disease can be formed in the destruction of healthy tissue tissue, possibly with tuberculous lesion or by damage to chemicals. The disease may be a consequence of central hormonal dysfunction, when the front proportion of the pituitary gland produces an insufficient amount of adrenocorticotropic hormone.

Endocrinology experts Among the causes of the occurrence of Addison's disease, there are autoimmune defeat, the consequences of long-term hormone therapy, the influence of fungal diseases, sarcoidosis, amyloidosis, hemorrhage in adrenal glands, syphilis and HIV infection, but it is more often a complex genetic defect.

About the symptoms of Addison's disease, reasons and signs

Symptoms of this disease may remain unnoticed many years until a certain hour «NS», Until the illness or stress happens, as a result of which the body's need increases in glucocorticoids. Gradually growing and takes the chronic form fatigue and muscle weakness, while the patient notices weight loss and appetite, it often occurs vomiting and nausea, accompanied by diarrhea and abdominal pain. An ortostatic hypotension is observed, characterized by a decrease in pressure in the standing position. The patient himself and the surrounding increasingly notice the manifestation of the dysphoria, which is expressed in increased irritability, unjustified quick-temperedness, constant discontent and frequent depressions. The patient feels attraction to salt and acidic food, as a result — severe thirst and abundant drink. The tremor of the hands and head becomes obvious, the patient feels tachycardia — Student heartbeat and increasing alarm, there is dysphagia — Violation of the process of swallowing. Women becomes irregular menstruation, men have impotence with frequent urination and overpowering urine. Paresthesia arises and sensitivity disorders, even paralysis of the limbs and the most obvious symptom — Increased skin pigmentation in the form of stains in places of open straight rays of the sun, the so-called «Melasma Addison».

Sometimes in the case of late diagnosis, the symptoms appear unexpectedly quickly, such a condition is called acute lack of adrenal cortex or addisonic crisis. For patients who have not received treatment for many years, or with a sharp decline in the dose of corticosteroids, this state is dangerous and is a threat to life. In addition, such crisis is sometimes observed in those patients who do not suffer from hypocorticism, but for a long time was treated with glucocorticoids due to other diseases, when a sharp decrease in the dose of hormone can lead to a crisal state.

The symptoms of the addisonic crisis are:

Diagnosis of the disease is difficult, since many patients with a small severity of symptoms most often do not appeal to the doctor. Treatment involves replacement hormone therapy, hydrocortisone is prescribed in strictly individual doses under the control of the level of hormones. In addition to medicinal therapy, a diet is needed with a sufficient number of basic nutrients, vitamins C and in. Recommended roshovnik, black currant, beer yeast, as well as products with elevated salt content of boiled meat, fish and vegetables. From the diet, it is necessary to eliminate bean, potatoes, dried fruits, coffee, cocoa, chocolate, mushrooms and nuts. With timely and adequate therapy, the forecast of the disease is regarded as favorable.