Home›Endocrinology›Do children grow in a dream

Do children grow in a dream

How a healthy child grows? What is a growth hormone? Candidate of Medical Sciences Olga Borisovna Pereskkin is responsible for questions.


«And my again from all overalls has grown, and the sleeves of the short steel shirts», - Mom sighs, walking with the child at the sandbox, and she is alive for nodding the same moms. But no in these sighs of real sadness, only joy - children grow! So healthy, and this is the most important thing. It seems that it can be more natural for a child than to grow? But it happens differently... If growth slows down or stops at all - this is a reason to beat the alarm.

How should a healthy child grow

- Sew all right away «Anxious» Mom - how much centimeters per year should grow up a healthy child?

- It depends primarily from the age of the child. The fastest of all the babies of the first year of life are growing, to keep sore for their «speed» impossible to anyone. Judge for yourself - usually a duddy child at birth has an increase of 48-50 cm. For the first year adds 25 cm! Normal growth of one year old baby - about 75 cm.

Then the pace decreases somewhat - in the second year of life, the child grows by 8-12 cm, on the third - by 10 cm. After three years, it is considered normal if the child adds at least 4 cm per year.

- Well, it is probably the rate for preschool? In school years, everything is different - the boys-girls leave for the summer holidays, and they return to the new school year «Dyadi-aunt»...

- This is a general rule - «not less than 4 cm» per year - acts in those moments when children occur in children. Growth jumps are a completely natural phenomenon for healthy children.

The first height jump occurs usually aged 4-5 years. The next usually falls on adolescence - the beginning of the period of puberty. At this time, children grow very quickly - a year to 8-10 cm and even more. Moreover, boys and girls it happens, as you know, at different ages - Girls «Start» earlier for 1-2 years, the boys are then catching up and distilled.. 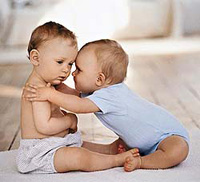 - You say that this is a normal phenomenon, but why exactly at this time, children often complain about malaise, and doctors sometimes explain all the fact that the child has grown too much...

- In fact, there is no contradiction here. Just internal organs, muscles, do not have time «to please» for the growth of the body, and there may indeed arise some discomfort, alert. There are muscle pain, but, as a rule, non-messengers. At this time, children are often determined, for example, the so-called physiological noises in the heart. Parents do not need to panic, but at the same time it is impossible to not pay attention to the child's complaints - it is necessary to carefully and regularly observe the doctor, so as not to miss the beginning of a truly serious disease.

- And how to determine - the child will be an increase «in mom» or «in pope»?

- You can say for sure that the growth of the child largely depends on the growth of both parents! That is, if mom and dad are both low, then the Son is unlikely to be the hope of a basketball team...

Moreover, the boys are usually growing just like their dad (or a relative of the men's line - Uncle, grandfather), and girls follow the script «Women's line» (Mom, Grandma, Aunt). So if the child's dad to a certain age stood in the rank of peers closer to the end of the rank, and a teenager in one summer «Washed», it is likely that «Kroha Son» Over time, catch up (and maybe it will distort!) ROWERS.

There is a formula for which you can calculate what your child's growth will be when it becomes an adult.

For this you need to fold the growth of mom and dad, this amount is divided by half. Then, if you need to calculate the growth of the son, then it is necessary to add 6.5, and if the height of the daughter, then take away 6.5.

But it is only average calculations. Depending on some other factors, the child's growth may be greater or less, differ from the estimated up to 10 cm! In one family, some parents have three daughters: one 162 cm, another 172 cm, and the third 157 cm, and the average height for girls in this family, for example, 165 + 10 cm.

- What depends on the Dietyatko will turn «Theory» or will not be dismissed to settlement numbers?

- First, from the presence of any chronic diseases in a child. For example, if a child has a severe asthma form, heart disease, chronic gastroenteritis. Secondly, on the living conditions, including from nutrition (its balance, protein, vitamins, etc.). From whether a child is engaged in sports! Children with regular and adequate physical exertion are better growing.

- And the truth is that children grow in a dream?

- True, the growth hormone stands out in the blood at night, when the child is sleeping tight. So absolutely right are those parents who lays a child to sleep always on time, no later than 10 o'clock in the evening.

- To which age child parents begin to realize that with their child «something is wrong» and lead him to the doctor?

- Usually it is 5-7 years. There are cases and very early circulation - when a child is 2-3 years old, and the parents have already noticed the wrong and led it to consultation, and it is correct and very good for a child! But, unfortunately, it is often treated very late - when children are 14-15 years old, and even more...

- Whether in recent years has increased the number of children with such pathology? If so, then what you associate it?

- Defaiting, diagnostics are connected only with the qualifications of doctors - pediatricians, endocrinologists, genetics. A lot depends on those specialists to whom parents appeal first.

- Is it possible to say in which regions of Russia is more common such a problem?

-No, growth hormone deficit (somatotropic failure) does not depend on the place of residence of the child.

Often it happens a congenital disease. For a variety of reasons in a child in a pituitary gland, very little growth hormone is produced from birth. The child is born with normal growth and weight, and then begins to grow badly and the two years usually does not reach 80-85 cm, like healthy children, and has only 78-80 cm. By five years, this lag is increasingly noticeable, and every year the child is increasingly lagging behind in growth from peers.

If the survey confirms that the reason for the lag in the lack of this most important hormone is diagnosed «pituitary nanism» and appointed therapy of growth hormone.

Growth hormone is produced in the human brain, namely - in the pituitary. In the late 80s, the growth hormone synthesized by genetically engineering was used for the first time for the treatment of patients. It is absolutely identical to human growth hormone. Given that the medicine was created relatively recently and its production requires special, high-tech conditions, the price of the drug remains very high. The cost of growth hormone for one child per year is 8-10 thousand. dollars. In recent years, the Russian government provides procurement of this expensive drug, and children living in the Russian Federation receive it for free.

- How many such patients now?

- About 2 thousand, but this figure is constantly changing, someone goes into «Adult» condition, someone diagnosed is installed for the first time.

- Children who take a gene-engineering hormone grow just like healthy?

- In the first year of treatment, the results are brighter - children are added in growth from 7 to 18 cm, an average of 10-12 cm. In the second year - 8-10 cm, in the following years - 5-7 cm. That is, in the first two years there is a saturation of the body with a hormone, which is not enough for so long - the children are caught up. And then the child grows in the same way as its peers, 5-7 cm per year.

- How old do you need to be treated? Or to what growth?

- Not only the age and growth in centimeters is important, but also the so-called «bone age». Bone age does not always coincide with chronological (passport), it is determined by the X-ray of the hands of the hands. It is very important when it comes to growth delays. While the so-called growth zones did not close - a person can grow when they close, growth is already stopped.

- That is, in this case, the growth hormone will no longer help?

- In our mail questions: «I am very small growth, how to grow?» - There are almost every week. Medicine can «resort» man at least with tablets?

- It is very important in such cases fundamentally distinguish between two problems!

The first - when the child lags behind in the growth due to the disease. Then the treatment is necessary, which, it is quite possible, will really allow him to grow up, and keep health.

The second - when a person is healthy, but just unhappy with his growth, he wants to be higher. In this case, it is necessary to carefully analyze his lifestyle, and, depending on the results of such a conversation, give some advice. But no medical preparations in such a case should do about the speech - from what to treat, if a person is healthy?

Once were «in fashion» miniature women, and we often came tall girls, begging to give them pills to stop growing. Today, the standard of beauty - fashion model (growth is not lower than 175 cm!), and more and more often come to us «for pills for growth».

Generally, dissatisfaction with its own increase is much more often a problem is not medical, but a psychological, personal. The ability to accept yourself as you are, with such an increase that you got genetically, from parents, is also a problem for many people, but more often in these cases requires the help of a psychologist, not an endocrinologist.

- Nevertheless, very high height, too, can also be a sign of unhealthy?

- Not excluded! Some diseases can really manifest themselves. First of all, it is a pituitary tumor, the so-called somatotropin. External diseases of the disease in children and in adults are different. In children (when the growth zones are open) implementation «Lish» Growth hormone goes to increase growth. In adults (when the growth zones are already closed) the clinical picture of the disease is manifested by an increase in individual parts of the body (increasing the nose, other parts of the body), there is a violation of the proportions of the body. In any case, it is necessary to examine, conducting primarily magnetic resonance imaging brain, examination at the endocrinologist. Further treatment will depend on the results.