The first signs of diabetes

Sugar diabetes is a complex disease that requires a serious approach when diagnosing and treatment and treatment. How to diagnose diabetes in an early stage to designate proper treatment in time? 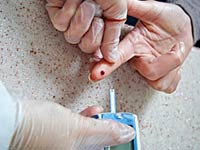 Diabetes — A complex systemic disease caused by an absolute or relative deficit of the insulin hormone, as a result of which a violation of carbohydrate metabolism develops in the body, in particular, the utilization of glucose tissues is oppressed. The first sign of diabetes — Increased glucose content (hyperglycemia) and as a result of this — Selection of it with urine (glucose). At the same time, or somewhat later violated the processes of the exchange of fats, proteins, water-salt balance. This is how a powerful loop of hormonally metabolic (exchange) changes are formed, which ultimately can lead to so-called late diabetic complications: the development of myocardial infarction, stroke, severe damage to the retina, kidney and other systems. This puts diabetes in the rank of acute medical and social problems requiring an emergency solution.

It has been established that diabetes is an extremely heterogeneous disease. It happens that he — only manifestation of the underlying disease. This is the so-called symptomatic diabetes, accompanying, for example, the defeat of the endocrine glands: thyroid (cm. How to check the thyroid gland), pancreas, pituitary glands, adrenal glands. Such a form of diabetes can be caused by some drugs. In successful treatment of the underlying disease, clinical manifestations of diabetes are disappeared.

Type I diabetes occurs more often in people under the age of 30, they suffer on average 10–15% of the total number of patients. One of the reasons for the development of type I diabetes— Defeat by viruses of beta cells of the islands of Langerhans of the pancreas producing insulin. A number of patients identify diabetes precede viral diseases, in particular epidemic parotitis (pig), rubella, viral hepatitis. Scientists assume that viruses affect the beta cells of the pancreas only in those who have a hereditary predisposition to diabetes. Many type I diabetes is an autoimmune disease, which is based on the defect of the body's immune system. Using recently developed methods for determining the blood of special proteins — Antigens can be installed, whether there is a risk of developing diabetes for this person caused by violations of the body's immune system.

The overwhelming majority of patients (about 85%) suffer from insulin-independent (II type) diabetes mellitus. Moreover, about 15% have a normal body weight, the rest suffer obesity. In other words, overweight and diabetes almost always go hand in hand.

The causes of the development of diabetes I and II types are fundamentally different. In type I suffering from diabetes due to a viral infection or autoimmune aggression, beta cells producing insulin are disintegrated, which is why its deficiency is developing with all dramatic consequences.

In patients with diabetes II type of beta cells, a sufficient or even increased amount of insulin is produced, but the tissues lose the property to perceive its specific signal. If diabetes is combined with obesity, then the main reason for the immunity of fabrics to insulin is that fat fabric as a kind of screen blocks insulin action. To break through this blockade, beta cells begin to work with an increased load, and ultimately there comes their exhaustion, that is, relative failure goes into absolute. However, it is very important to emphasize that insulino-independent diabetes does not pass at the insulino-dependent.

In type II suffering from diabetes and having a normal mass of the body, the cause of the disease is a violation of insulin signal perception by receptors located on the cell surface.

But Whatever the root cause of diabetes, in the body, at the same time, the conversion of sugar coming from food and contained in the animal starch glycogen, which is postponed in muscles and liver.

An increase in blood sugar is accompanied by reinforced with urine. The release of large amounts of liquid from the body causes dehydration of tissues, the patients have thirst; instead of relying 1.5–2 liters of fluid per day they drink up to 8–10 liters. Accordingly, the amount of urine increases, that is, a vicious vicious circle is developing.

Along with high thirst, general weakness increases, skin itching appears, dry mouth. As diabetes develop, as already mentioned, not only carbohydrate, but also fat, and protein exchange. As a result, diabetes in patients with diabetes decreases to many, including infectious diseases, they have more severe and for a long time.

True insulin deficiency or disturbed perception by its cells slow down not only the conversion of sugar in glycogen, but also the combustion of glucose in the tissues. Therefore, the body as an energy material has to use fat. An intensive yield of fatty acids from fatty depots and their active splitting, which, in turn, leads to accumulation in the blood and tissues of so-called ketone bodies: acetone, acetoxus and beta-hydroximacean acids. Increased content of ketone bodies in the blood causes the body poisoning and primarily the central nervous system, and this contributes to the development of severe complication of diabetes — Diabetic Coma. The patient violates vital functions, including blood circulation and breathing, and, if you do not take action in time, it may die.

The main goal of treating a patient of any form of diabetes — Reduce blood sugar content, normalize all kinds of exchange in the body, to prevent the development of severe complications.

Treatments are different depending on the type of disease. Suffering insulin-dependent (I type) diabetes need insulin injection. Patients with II type of diabetes are prescribed saccharination drugs; Sometimes it is possible to normalize blood sugar alone with a diet.

Diet pattern — This is the cornerstone in the treatment of patients with diabetes mellitus, regardless of its clinical form. Each patient, taking into account the mass of his body, age, gender, physical exertion should strictly calculate the calorie content of the diet, the content of carbohydrates, proteins and fats, trace elements and vitamins. We also teach this patients.

The beneficial effect on the patient's condition has moderate strictly individual physical exertion. In the process of performing physical exercises, an increased oxidation in the muscle tissue of glucose comes from the blood is occurring, and therefore, the content of blood sugar decreases. That is why the suffering of diabetes at any age is needed physical exertion.

Do diagnosis and make an effective course of treatment will help the doctor endocrinologist.
To record on the reception on the diagnosis of diabetes at an early stage, you can contact