Botulism: Recognize a danger on time

Who among us does not like canned food? And smoked? Meanwhile, all these goodies can cause botulism. How to recognize signs of dangerous disease in time and what to do next? Answers in the article


Sometimes the hand does not rise to send the jar with home preservation on the garbage - after all, a good thing is a jar, well, the lid swept a little, perhaps, sometimes swears, really, hesit. In the full sense of the word. Then we can assume that lucky. But one day maybe not lucky. And a terrible diagnosis will be given: botulism.

However, you can suffer not only from canned. Remember, you bought on the way on vacation per feather salty or smoked homemade fish? And dried meat in spices? Against the road temptations so hard to resist! And I don't want to think at all that this pleasure can end very sad.


Cause of all troubles 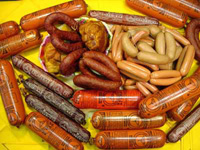 Cases of botulism after the use of sausages were witnessed in Byzantium. From here, by the way, the name of the disease: «Botulus» Latin means sausage. However, its pathogen is found not only in sausage products. Botulism wand dwells mainly in the soil, where directly or through «Intermediaries» (organisms of animals, birds, fish, mollusks) falls into food.

It enters the list of bacteriological weapons agents and is no less terrible than the Bacillus of Siberian ulcers. Rather, this wand in danger is not. Death carries to the toxin produced by it, the strongest of all known biological poisons - 375 thousand times more active than the poison of the rattling snake!

So that the stick of botulism is activated, an anaerobic medium is needed, that is, no oxygen. And it is under the shell sausages, in smokers smoked and drilled products and, of course, under the lid cans with canned. In 95% of cases, the source of infection becomes canned mushrooms: the slices of soil are becoming a mini slow motion.

Once in the body, the poison is instantly absorbed into the blood and affects the nervous system. The transfer of nerve impulses is blocked, causing paralysis of the muscles, including those responsible for breathing. If the help is late, the painful death will come from choking in full consciousness. In addition, the poison affects the internal organs. Therefore, the consequences of botulism even after cure a long time to know about themselves: the muscular function is not immediately restored, the complications affect the heart, liver, kidneys.

Since the use of infected food before the appearance of the first symptoms, it takes from 2-3 hours to several days (the shorter the gap, the heavier poisoning). At the earliest stage, the patient's condition is typically for all intestinal infections: nausea, abdominal pain, dry mouth, vomiting, liquid chair. Sometimes, on the contrary, there are constipation, not measurable.

But around a day, problems of other kind begin. Worsen vision: appear before your eyes «fog» or «Mushkush», The image is doubled, especially when looking to the side. Patient with difficulty distinguishes close objects. Pupils are expanded, and one wider than another. Often the squint is noted, the omission of centuries of one of the eyes.

Sad mortality statistics from botulism (up to 20% of cases) - the result of untimely help. The disease does not always take place with all the symptoms listed. But even one of them in the easiest form is enough to immediately cause «ambulance». Insist on immediate hospitalization: to assist the patient (introduce anti-cancer serum and deoxide) can only in the hospital.

In no case may not try to wash the stomach independently - paralysis of the fabrics of the pharynx can come at any time, and the person will just chollow!

And remember! The faster the help comes, the more chances to survive.