Childhood - It is time for games and carelessness. Alas, in the life of not all children, everything is so cloudless: the kids with muscle dystrophy are simply not capable of moving games. How to cope with this ailment? About the reasons, treatment and prevention of this disease, read in this article.

Muscular dystrophy - the concept relating to any congenital muscle disorder, which is characterized by a progressive motion intake without appropriate involvement in the nervous system process. May be affected heart and respiratory system. These violations are rare.

Muscular dystrophy Duzhenna is the most destructive of all muscle dystrophy. This is a progressive disease that usually ends with death up to 20 years of age, although some patients live to their 20th anniversary. Death of children comes not as a result of muscle disorders themselves, but from the complication caused by them. In most cases, death occurs as a result of a respiratory infection, which can begin, as weak, but it is rapidly deteriorating. The cause of death can also be heart failure.
Durane muscular dystrophy develops only in boys. It is usually hereditary and happens at 1 out of every 3,500 living boys born. The genetic factor is an imperfect gene - is transmitted to a child from the mother, but their violations themselves do not develop. There is a 50 percent chance that each son has a genetic factor's woman with a disease and a 50 percent chance that each her daughter becomes the carrier of this factor. 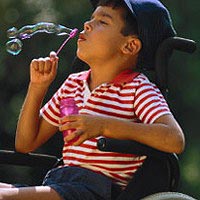 In most cases, the symptoms of muscle dystrophy do not appear until the child starts walking. Half of sick children begin to walk after 18 months of age. Symptoms are usually manifested at the age of 2-5, when the muscles of the lower parts of the body and the spine are amazed by the first. Slow intellectual development and border mental retardation can accompany muscle dystrophy.

The symptoms of muscle dystrophy Duzhenna are the following: reluctance to walk or slow down walking; abnormal walking, often walking in turning or swinging gait; walking on the fingers of the legs; inability to jump or run normally; The difficulties of lifting the stairs, on the pavement and input or exit the car; Frequent drops. The affected child is difficult to rise from the floor; He must get up on his arms and knees, pulling up his legs close to her hands, and only after that «come true» legs standing standing. In connection with walking on the fingers of these children, the front inclined position of the pelvis is developing and, accordingly, the deformation of the back.

A child with muscular dystrophy of Duzhenna quickly gets tired and experiences difficulties with maintaining the weight of the whole body on one leg. There is usually an increase in muscle volume, especially ICR; legs tend to be amazed symmetrically. Hands are usually not amazed until the disease goes far. Problems with teeth, including the expansion of the jaw and the expansion of the gap between the teeth, arise quite often.


The ugliness of the bones rarely happen before that age until the child with Duzhenna's muscular dystrophy will be able to walk longer, usually approximately 10-13 years old . Since the disease progresses, muscles are weakened, muscle reflexes disappear. Bad posture, due to constant seating, causes compression of muscles and tendons of hips, knees and elbows. These tightening lead to an abnormal position of hands, legs and stop, such as closure. Scoliosis (spinal curvature) often develops in such children.
In children with muscle dystrophy Duzhenna, constipation often happens due to permanent seating. The diaphragm (the muscular partition between the breast and the abdominal cavity) is still valid, but other respiratory muscles begin to collapse. As a result, the child's ability to breathe. Changes in the health of the heart muscle happen from 60-70% of all patients, they have problems from the heart.

If the disease appears early, this disorder may be severe and very strongly resemble muscle dystrophy of Duzhenna. Other cases early starting muscular dystrophy of the pelvic ring are much easier and progress slowly; Sick children retain the ability to walk, becoming adults.

As in dystrophy Duzhenna, the symptoms of muscle dystrophy of the pelvic ring may include an increase in the volume of muscles and walking on the toes.
If the disease begins early, respiratory problems, severe scoliosis usually develop quite quickly.

Perspective for children with muscle dystrophy of the pelvic ring depends on the degree of severity of muscular weakness and muscle destruction rates. Involvement in the heart process is not common in this disorder, mental development is also not deteriorated. Death at the same disease occurs less frequently than with dunenery muscular dystrophy, but may come due to complications.

Significantly weaker form of muscle dystrophy - face muscle dystrophy, blades and shoulders, primary muscles, shoulders, top of the back and face. Facial muscles have a tendency to weaken the shoulder muscles. In some cases, the muscles of the lower extremities are also affected. This type of muscle dystrophy can be developed in boys, and girls; Responsible for the disease The genetic factor can be transmitted by the parent suffering from this disease. Their children have a 50 percent chance of developing muscular dystrophy shower-face-facial.
Muscular dystrophy shoulder-blade-facial syndrome is usually easy and progresses slowly. Symptoms usually do not appear to youth or adult, very rarely they appear as a child. Weakness is usually small and captures only one area. In rare cases, especially when the disease begins in childhood, weakness goes into exhaustion.

For patients with shoulder-blade-face muscle syndrome, muscle dystrophy is typically that they cannot close the eyes tightly, squeeze her lips, inflate cheeks or wrinkle lips to blow or whistle. Double beam usually appears at the corner of the mouth when the patient is trying to smile.

When there is a weakness of the shoulder muscles and the top of the back, the patient is difficult to raise hands or objects. The blades are tightened up in the direction of the head, giving the shoulders a characteristic terraced view.

Weaknesses of the shoulder-impact-facial muscular dystrophy syndrome usually do not acquire a more severe course, and patients lead a normal, active lifestyle. In cases of heavier disorders, the movement of hands and shoulders can be constantly limited, not allowing some movements. Neither the heart nor the lungs are affected by this disorder, intellectual development does not suffer.

Muscular becker dystrophy is like a dunenery muscular dystrophy, but is significantly less common and less severe. As in the cases of dystrophy Duzhenna, boys of mothers carrying responsible gene, have a 50 percent chance of developing this disorder, and girls have a 50 percent chance to become carriers of a genetic factor. Patients with this disorder usually die between 30 and 50; Death rarely comes up to 20 years.

Treatment and prevention of muscle dystrophy

Since cases of cure of muscle dystrophy were not observed, the treatment focuses on maintaining the ability of the child to use, as far as possible, affected by the muscles. Children should receive support that allows you to use the muscles involved as much as possible in order to avoid loss of flexibility and muscle destruction. Even during the periods of exacerbation of the disease, children should try to move. Weak cases of muscle dystrophy of the shoulder-blade-facial syndrome and becker do not require further treatment, since violations are weak and do not interfere with a normal lifestyle.

In addition to the use of own muscles, children with muscle disorders of a dunenery or a pelvic ring must perform various exercises recommended by a doctor or physiotherapist. These exercises are designed to hold joints through all possible movements and prevent spasming of muscles and tendons, which can reduce the ability to walk. At the time when the child does not move and does not exercise, he should lie on his stomach, in order to stretch the hips and reduce muscle cuts.

If the muscles begin to collapse, special orthopedic devices should be used to extend the possibility of walking - braces. These braces are made of light plastic and cutting down the child's leg. Tire overlay for the night can be used to support the ankles and reduce the chance of developing closure.
As for the prevention of muscle dystrophy, now it is impossible to determine this disease before birth. However, gender of the fetus can be determined, and if it is established that the mother is a carrier of a heavy, fatal muscle dystrophy, a risk of risk can be determined for the fetus.