Acute cholecystitis in children is quite rare, but, nevertheless, sharp forms are found. What should parents know how to suspect this disease and facilitate the suffering of a child waiting for a doctor?

Acute cholecystitis in children is diagnosed rather rarely, more often the disease occurs in an erased form and makes itself felt already at the stage of the chronic process. But, nevertheless, acute forms meet and parents should know what to do in case of disaster, since the delay is fraught with serious complications.


How is the sharp form of cholecystitis in children? 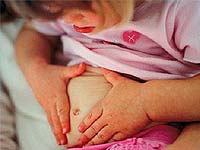 The disease begins suddenly with sharp pain in the stomach in its right upper square. The pain is bottled all over the stomach, gives to the right hand, sometimes in the lower back. It is accompanied by nausea, sometimes vomiting with an admixture of bile. Temperature of the body rises to 38-40 0C, the tongue becomes dry, covered with a grayish white bloom. The baby pale, restless, often changes the position of the body in search of a comfortable, facilitating pain pose.

Older children can describe their sensations caused by the disease. The kids of the first years of life can not express their sufferings with the words, their shiny, they refuse food, cry, point to the tummy, but they cannot exactly localize pain. Due to the weak development of muscles in young children, there is no typical for cholecystitis the voltage of the anterior abdominal wall. A child when toughing the abdomen shudders, bends, pressing legs — reacts to soreness during palpation, the stomach during the attack sweeps, constipation occurs, subsequently turns into diarrhea.

Symptoms of cholecystitis are stacked in the picture «acute belly» — Critical states for life. Independently distinguish cholecystitis from another acute disease of the abdominal organs is impossible. Even experienced doctors face the difficulties of diagnosing such a disease, like cholecystitis in children. The task of parents respond to changes in the child's state, call the brigade «Ambulance» Or independently deliver Chado to the nearest therapeutic institution.

The main event of first aid in acute cholecystitis in children — Call doctor and brigades «Ambulance». The inflammatory process in the gallbladder develops rapidly, quickly goes beyond the bodies of the body and leads to the development of complications, in particular, peritonitis. Gangrena gallbladder develops in three stages. The sharp start is replaced by a period of imaginary well-being, during which the child feels and looks absolutely healthy that calms the parents. After the closuit with the development of complications and the clinical picture of peritonitis, the condition becomes extremely difficult, save the child is difficult.

If you suspect the baby cholecystitis, waiting for the doctor to ensure peace, arrange it in a convenient position on it on the crib, as a rule, it is a position on the side with bent and led by.

Do not let the child go, most likely, he himself does not want to eat food, because the attack of cholecystitis is accompanied by nausea, offer slightly warm water, unsweetened tea. 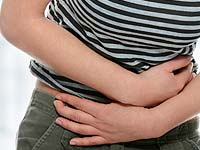 Acute cholecystitis in children in most cases has a microbial nature, sometimes occurs as a manifestation of giardia and helminthosis. The use of heating heating compresses and other thermal procedures in acute cholecystitis is categorically contraindicated. Heat causes blood tide to the patient, enhances inflammation and contributes to the suppression. To alleviate pains to the stomach, you can attach an ice bubble, in addition, it will contribute to the restriction of the inflammatory process.

With acute cholecystitis, however, as with any acute process in the abdomen, it is strictly forbidden to remove pain pain medication. They are «Satrut» Picture of the disease and make it difficult to diagnose. If the pain is unbearable, you can give the child analgin or but-shu, they will not take pain, but it will make it easier for some time. Thus, the first assistance in acute cholecystitis can be expressed by three yelling words: hunger, cold and peace.

The course of acute cholecystitis in children is in most cases benign. Against the background of treatment, the messengers in the hypochondrium are saved for several days, the body temperature is held at a high level, then the inflammation fills, and its manifestations disappear.

Due to the fact that the inflammation of the gallbladder in children, as a rule, has a non-calculous nature, with a competent approach to therapy, the disease passes without consequences. In 30% of children, sharp cholecystitis goes into a chronic form.