How to infect polio? How this disease occurs, polyomelitis treatment? Answers to these questions you will find in the article.

Poliomyelitis - acute viral disease with damage to the nervous system. It is currently found very rare due to the fact that the obligatory vaccination of children at an early age against the causative virus has been adopted. However, it is possible that the occurrence of single cases of disease in people with a non-informed immunity after vaccination or those who in childhood received a medical woman from vaccination (due to other diseases or allergic reactions). People of previously vaccinated is formed a lifetime immunity to three main poliomyelitis viruses and the emergence of the disease is impossible. 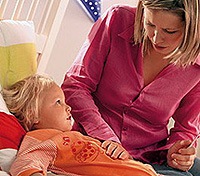 Consider the clinical manifestations of the disease in cases where the infection still happened, and the immune system has no. Poliomyelitis virus itself spreads easily by water and infection is possible through water, food and unwashed hands. The age of the onset of the disease significantly affects the severity of the symptoms: children suffer the disease is harder than adults.

Initially, a gastrointestinal tract is affected by the virus: a slight intestinal disorder is developing, fever and easy indisposition. From the intestine, the virus is absorbed into the blood, after which (on average after 2-3 weeks), symptoms of damage to the central nervous system (CNS) appear.

The most favorable form of defeat of the central nervous system is without the formation of paralysis. It is characterized by fever, dizziness, headache, blood tides to the skin. Then appear pain in the back and limbs, sometimes pain in all muscles; The rigidity and tensions of the muscles of the neck is determined. After several weeks of the existence of such symptoms, the patient completely recovers.

The worst forecast is possible in the second form of damage to the central nervous system - with the development of paralysis. With this form, emerging pains in the limbs and back are replaced by paralymps of individual muscles of the body, limbs, neck, t.E. their pronounced weakness and inability to arbitrary movement. Perhaps the development of massive symmetric palsy of neck, hands and feet and «Spotted» paralysis - with asymmetric damage to individual muscles throughout the body. Usually, paralysis reaches its maximum in a day from its start. During this time, maybe his «ascending» or «descending» Distribution on the body - that is, from the legs to the neck, or back.

Parabi licensing muscles literally lead to person's disability - inability to move independently and serve themselves. In addition, they can lead to dislocations in the joints. This is due to the weakening of muscle support of the joint, as well as the pathological redistribution of the muscular tone in its area. In addition to palsy of skeletal muscles, the development of paralysis of the diaphragm, pharynx, language, intercostal muscles is possible. These manifestations are especially dangerous due to the possible pathology of breathing and swallowing. Such patients must be translated into artificial pulmonary ventilation in time and give food through the gastric probe.

In the treatment of poliomyelitis, the absolute peace is primarily important, which will reduce the likelihood of bone-articular complications. Achieve its bed mode and the use of supporting corsets. In addition, physiotherapeutic procedures are used for the prevention of the joint joints of the joints - hot compresses on the painful muscle region, therapeutic physical culture under the control of the doctor. Secondly apply anti-inflammatory, analgesics and tranquilizers.