disease
by admin
Frozen shoulder - frequenta disease in which there is the shoulder tendons and loss of serous bags inflammatory damage to the ligaments and connective joint tissue sheath. The structures forming the shoulder joint, it does not usually change and inflamed.

The disease is considered to be the main cause,at which the shoulder appear in severe pain. With Statistics periarthritis faces about a quarter of the world's population. Predisposition to disease by sex is not, ie, equally sick both women and men.

Why the disease occurs? 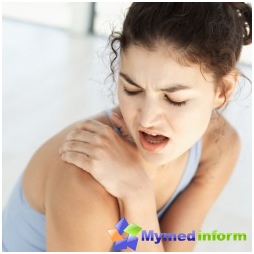 The main cause of the disease - a variety of injuries,rather, unusual activity. Cause of the disease, for example, can fall on an outstretched hand or forward on either shoulder. Provoke the appearance of the disease may be still too high physical activity, the impact in the shoulder area. In addition, the disease can be generated during physical exertion in people who rarely engaged in training and sports.

Pathology manifests itself immediately, but after someperiod of time, perhaps several days. Therefore, many patients often can not tell when injured, which was the cause of the disease.

In addition, quite often the cause of periarthritis are some diseases of thoracic and abdominal cavities. For example, the appearance of disease can provoke myocardial infarction. when some of the problems is no secret that with the painthe heart muscle can be given in the left hand. The reason is a reflex spasm arising limb, which, in turn, is able to impair the blood flow in the left shoulder. Frozen shoulder is formed because the tendon due to lack of blood supply is made particularly vulnerable and fragile. Then become inflamed and swollen.

Periarthritis can be caused by a variety Moreliver disease. Often, this pathology occurs in women who have had a serious operation for breast removal. Such operation leads to a disruption of blood flow, in particular in the shoulder area.

Sometimes this pathology develops dueSome diseases of the cervical spine. Problems such as spasms of the chronic form of the neck muscles and the displacement of the facet joints can lead to infringement of the bundle of nerve fibers that provide just the brachial plexus nerves. Can occur whereby some reflex spasm of blood vessels supplying the tissues of hands. This spasm causes problems with blood circulation.

The structure of the human shoulder joint is enoughcomplex. Thus, in the shoulder region has many small muscles, tendons, ligaments, and various vessels and nerves. Because of this inflammation in the shoulder area, which arose in this disease, it occurs quite hard. 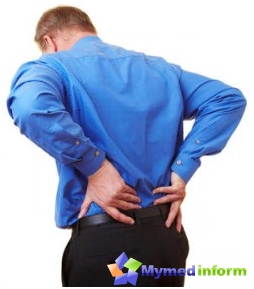 Depending on whether the symptoms of the disease, shoulder periarthritis distinguish whether expressed occur:

The easiest form of the disease - a simple periarthritis. Often it starts with minor pain in the shoulder joint, which usually disappear alone. Most often, pain bother when a person raises his arm up or gets behind it. At the same motion in the shoulder joint is strongly limited. If your hand is opposition, the pain is even stronger.

If left untreated acute form of the disease, then after a few weeks it will pass in the chronic. At the same time there are the following symptoms:

At this stage, 60-70% of cases, the disease can cease spontaneously without the application of any treatment.

In other situations, the disease becomesthe most severe form - shoulder capsulitis, which is considered incurable. This forms ankylosis, t. E. There is fusion of the bones shoulder together. Because of this, the patient to move the shoulder joint is practically not.

The pain in this form of disease may not be verystrong and blunt or, alternatively, may occur at any movement and be strong enough. However, the ankylosis makes a person disabled, preventing normal use of his hand. The patient at this stage can not raise the injured arm forward and make it for a spin. In her hand turns to raise a maximum of 20-30 degrees. The rotation of the shoulder joint as possible.

As well as than to treat disease? 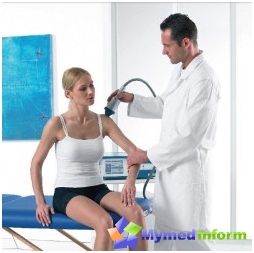 Treatment is usually given a neurologist orsurgeon. With the advances of modern medicine can cure almost any form of the disease. The hardest thing, of course, to cure shoulder capsulitis. Therefore, the earlier treatment is started, the better. First of all, it is necessary to remove the cause of the disease. For example, if the cause is the displacement of intervertebral joints, the treated activated manipulation. In violation of the circulation of blood in the shoulder angioprotective drugs are used.

If you have problems with the tendons in the shoulder firstnon-steroidal anti-inflammatory agents are assigned. In a simple shoulder periarthritis taking these drugs is often sufficient for the treatment. If the disease has not yet been passed into the acute form, it appointed compresses Dimexidum and bischofite. In the treatment of frozen shoulder proved to be good laser therapy.

Approximately 80% of patients helps procedure inwhich are held two or three periarticular injection of hormone corticosteroids. Therefore, it is often prescribed by doctors as a treatment. a special blend of hormones from the anesthetic is administered during these injections.

Even more effective is this methodpostisometric treatments like relaxation (PIR). Most patients can be cured by this method of treatment sessions 12-15. To speed up the recovery of the PIR can be combined with a laser and manual therapy and massage. Effectively showed themselves more through the course survey work two or three days after the introduction of the bag periarticular corticosteroid hormones.

Often assigned a method for the treatment of the disease or as a hirudotherapy leech therapy. Although some patients can be allergic tosuch therapy. Leeches, which are applied to the affected area, release substances, improving microcirculation. If an allergic reaction manifested, this therapy is canceled.

Important! If you are planning to treat the disease folk remedies, before it is required to consult with your doctor. Since such a way basically treat only mild disease in the chronic form.