medicine
by admin
Currently, for treatment of diseasesfemale reproductive system various dosage forms are used: tablets, solutions vaginal creams, suppositories (their other name - suppositories). If the inflammation may be eliminated by using a local impact, it is advisable to resort to a vaginal suppository.

Of the many drugs that can relievewoman from harmful bacteria, fungus and other causes responsible for the inflammatory process, can be identified Betadine. our site will tell in detail about its composition, disease, from which it can deliver. And yet, we will explain to readers if there are contraindications to its use, there are possible adverse effects during treatment?

Betadine can be seen as a solution, ointment,liquid soap and vaginal suppositories. All of these forms for several years already purchased by hospitals. Their everyday use allowed gynecologists considerable experience of effective clinical use. At the moment, doctors all over the world rather successfully prescribed Betadine their patients. Almost 40 years of preparation was subjected to various studies. They showed that Betadine has proved popular not only for outpatient use, that is, at home, but also in preparing women for surgical interventions in the hospital setting. Betadine can reduce the risk of complications in the postoperative period. Entitled "Betadine" medicine is available on one of the pharmaceutical plants located in Hungary.

The solution, which is used for external purposes, is prepared in 10% concentration, since it is very similar to the familiar to all iodine. Then it is packed, 1000, 120 and 30 ml in plastic vials green.

If you look at the ointment manufactured also in 10%concentration, it has a homogeneous structure, the color of her brown. A distinctive feature - the presence of the characteristic odor of iodine. The tube weight 20 g ointment.

Now let's take a closer look at"Betadine" suppositories. The term "Suppositories" refers to solid at room temperature, dosage forms that are melted (or break) when they enter the body cavity. Vaginal suppositories melt when they get into the vagina, providing there is a local therapeutic effect. For ease of use, these suppositories are made in the form of small torpedoes, the color of their dark brown, homogeneous consistency. Each candle weighs 3 grams. In the package 14 (or 7) suppositories. 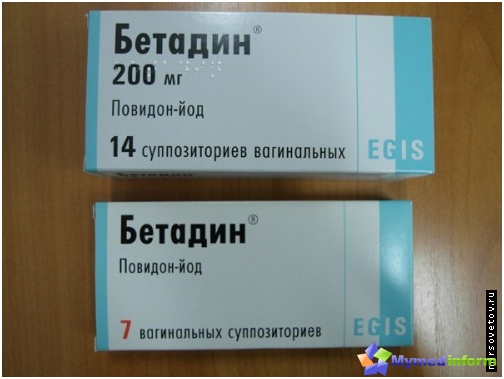 The main active ingredient ispovidone iodine. In 1 candle it is 200 mg, and macrogol 1000 acts as an auxiliary component. Povidone iodine has pronounced antiseptic, antifungal, antiprotozoal and disinfectant properties. That is, the drug has a detrimental effect on the cell walls of pathogenic microorganisms, for example, Staphylococcus aureus, Escherichia coli, fungi, viruses, protozoa. Once on the mucous membranes or skin, iodine is released from the complex and interacts with the proteins of the cell wall of the pathogenic iodamine flora, destroys them and causes further death of both gram-negative and gram-positive bacteria. At the same time, during local use, iodine is almost not absorbed into the blood. The mechanism of action of Betadine does not allow harmful microorganisms to develop resistance to the drug. And many modern antibacterial drugs, if they are constantly illiterate to use, cease to have a therapeutic effect, that is, they do not destroy the causative agents of the disease.

When appointed Betadine in candlelight?

The drug is well established in the treatment of gynecological diseases following: 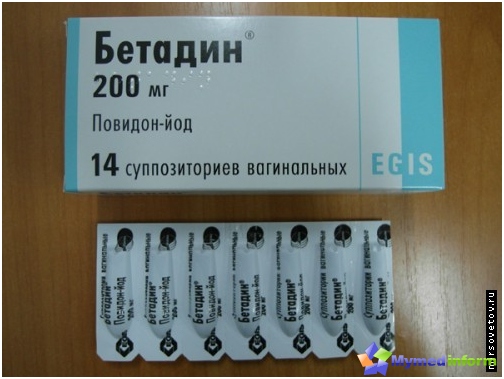 Prior to introduction into the body cavity of the candle tipslightly moisten with water and enter deep into the vagina. Making it more convenient to just lying. Some patients pick up one foot on the chair, and then introduced into the candle. Of course, pre-supposed to observe all the rules of personal hygiene, hands should be clean. Then he should lie down for about an hour, so that the active drug substance is well and evenly distributed over the surface of the mucous membrane of the vagina. Therefore it is better to carry out the procedure before going to bed. In the acute phase gynecologist appoint 1 suppository twice a day, preferably - early in the morning and before bedtime. In chronic illnesses the treatment should be carried out within 14 days, but a candle to enter 1 time at night. In some cases, when the disease responds poorly to treatment course can last for 21 days. During the use of women to use panty liners, so as not to stain the linen.

If, during treatment appeared monthly, the treatment is not canceled on these days, the procedure continues.

Sometimes it is found that the patienthypersensitivity to Betadine. She appears a little itching or burning. Typically, after a few days the body ceases to respond in this way. But sometimes there are more serious symptoms, such as contact dermatitis, characterized by the appearance of psoriasiform small reddish elements. This will certainly tell your doctor, he will cancel the drug, and pick up another antibacterial agent. If the patient had disorders of the thyroid gland, and it is a long time introduces Betadine, it is possible to develop such a disease, hyperthyroidism.

Are there any contraindications in medicine?

Yes, our site warns readers that Betadine is not recommended in the following cases:

In gestation and lactation gynecologists rarely prescribed candles Betadine. If this occurs, then only under strict medical control.

The drug is not compatible with other antiseptics and disinfectants, particularly if they contain alkali, enzymes or mercury.

If hydrogen peroxide is used simultaneously with the silver or drugs, that they reduce the therapeutic effect each other.

If you have soiled during treatment with betadine hands or clothing, these marks easily washed away with water.

our website drew attention to their readers that the package with the suppositories should be stored at a temperature ranging from +5 to +15 degrees Celsius. Keep away from small children!

The virtue of the drug is what Betadineprotected from the appearance of resistant microbes him. Another valuable feature - the ability to use any of the days of the menstrual cycle. But if there are adverse effects, then report them to the attending gynecologist.