The use of Lamisil

medicine
by admin
Many active people who adhere to healthylifestyle, frequent the swimming pools, saunas, gyms, spas, beaches. All this kind should only contribute to better health. But there are some diseases that can "catch" involuntarily in public places.

Love for the sport, sun, sea air,walks barefoot on the beach sand sometimes leads to fungal infections. The illness insidious, difficult and long treated. When it comes the defeat of the skin or nail fungus contagious. In the initial stage fungi easier to handle. But people often overlook this point. And the disease is spreading more and more. Drugs affecting parasitic fungi form, produced quite a lot. Today, our site will acquaint readers with the means, which often advertise on TV. Its name - Lamisil. 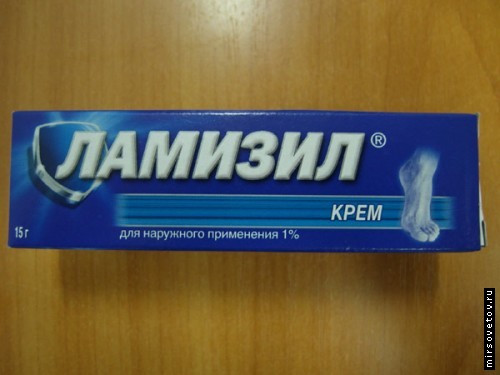 As the drug works?

Lamisil produces well-known company "Novartis"Switzerland. The active ingredient of this drug is terbinafine. Include drugs to a large group of antifungal agents. When using Lamisil going education suppression of vitamin D precursor, called ergosterol. It is very necessary to fungal structures for the normal development and functioning. The second area in which the effects of the drug Lamisil - this oppression activity of squalene epoxidase - specific enzyme, which is located on the membrane of fungal cells. Because of this gradually accumulates in the cells of fungal squalene, which leads to their death.

When the expected effect?

Hearing the promises of a commercial, man,suffering from mycoses, believes that he will anoint the sore spots with a cream a couple of times, and the fungus will recede. Unfortunately, this will not happen. The desired effect of this fungicidal agent develops gradually. The drug substance will slowly poison the infectious fungi. For some time, these fungal cells can still exist on those reserves of vitamin D, which were in their "bins". The toxic effect of a drug substance on fungi cannot occur instantly. You will notice an improvement on the skin after only a few days of applying Lamisil. The final result of the therapeutic effect can be expected only after long weeks of using Lamisil, it all depends on in which area the lesions are noted, how long the disease has developed, whether the patient carefully follows all the recommendations and hygiene rules. Not understanding the mechanism of action of the drug, many patients hoping for a magical healing come to the pharmacy or doctor and disappointedly report that the medicine is ineffective. Therefore, if you decide to get rid of the annoying fungus, stock up not only with several packages of the drug, but also with patience and diligence. our site once again reminds that the treatment with this drug will be long. And some patients, having anointed a week (or two) diseased areas, give up treatment when they notice improvement. With fungal infections, this cannot be done! Even if there are no visible signs of the disease on the skin, and the course of treatment has not yet reached its final stage, it is necessary to continue lubrication (or taking the tablets inside), following all the doctor’s recommendations clearly. Otherwise, those fungi that you don’t see can gain strength, recover and continue their “dark” business. This process is called relapse. If you prematurely quit the course of treatment, the fungi will again begin active reproduction. Some then justify the early completion of local procedures by the fact that they did not want to poison their body with chemical compounds. These arguments are erroneous, the medicine acts locally, that is, locally, if something penetrates the bloodstream, then pharmacologists speak only about 5% of the total amount of active substance, which is completely safe for the human body. If the drug is prescribed in the form of tablets inside, then it is purposefully sent to the stratum corneum of the skin, nail plates, hair follicles and accumulates there to have a fungicidal effect, that is, to destroy pathological fungi.

Lamisil exerts its activity against dermatophytes, Trichophyton, athlete's, microsporia, candida and other parasitic skin and nail fungus. The range of activities is quite wide: 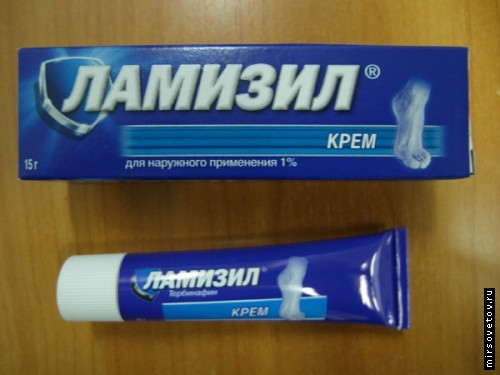 First of all, I would say that the pharmacy you can see the Lamisil in several dosage forms:

Dosage forms for topical LamisilUse should be applied to the cleaned and pre obsushennye skin area. In addition to the focus, you need to handle and the surrounding skin area. If diaper rash is allowed to rub the drug or gauze to put on top. The procedure to carry out enough once or twice per day. But the duration of the course depends on the degree of damage and other factors determined by the attending physician.

Lamisil tablets are usually prescribed by a dermatologistfor one day. For treating stop it spent an average of 14 days. If the focus of fungal infection in the hairy area of ​​skin, the treatment should be carried out for about a month. But at the destruction of nail fungus takes some patients two others - for three months. This is because the fungus manages to easily penetrate into the different layers of the nail plate, but lamizilom difficult to get right into all layers of the plate, because in it the metabolism is very slow, and therefore need to wait until the nail otrastёt. The longest is a process of treatment of the nails on the feet.

In the case of multi-colored lichen pills are not used.

Caution should be observed for those patientswhich have liver disease, or renal cancer. Studies in pregnant women and children is very small, so the pregnant women the drug is rarely prescribed. A breastfeeding should be avoided in treating pills.

Few clinical trials have been conducted in children such dosage forms as solution, cream, spray. Therefore, children under 12 years are rarely appointed.

About all adverse events should be reported to your doctor, who will correct dose or even cancel the drug if the patient hypersensitivity manifest to him.

The drug is put on the skin gently so it does not hit in the eye, or else there will be irritation of the mucous membranes.

Lamisil is available in a convenient dosageforms, with course of treatment has shown good results. But before using it all means read the instructions to follow the recommendations outlined in it. And yet our site resembles that treatment should be conducted under the supervision of an experienced doctor to monitor the dynamics and control the duration of the course of therapy. And do not forget about disinfection and hygiene.