If there are signs of hyperthyroidism and thyroidSymptoms of iron tells of trouble, it's time to take action. How to deal with hyperthyroidism and its symptoms? About treatment by conservative methods and operations on the thyroid gland - in the article. 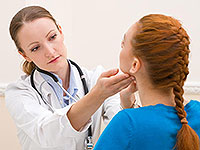 So, if there are signs of hyperthyroidism and thyroid
Symptoms of iron tells of trouble, it's time to take action. Treatment
depends on the nature of the disease, age and condition of the patient, but in any
the case of using one of the methods described below.

Treatment of hyperthyroidism pills aimed at reducing
production of thyroid hormones. The main place in the treatment take
antithyroid drugs that inhibit the accumulation of iodine in the tissues
thyroid, and thereby limit the synthesis of hormones which structure
part of this trace element. Tablets do not destroy the thyroid tissue, but only
limit their metabolic activity, so they must be taken daily,
long, at least for a year, constantly monitoring the level of
hormones.

The disadvantage is the lack of antithyroid therapy
long-term effect in the fight against hyperthyroidism and its symptoms, treatment must be repeated
after several years in 30-50% of cases. In addition, the intake of the tablets often
decreased white blood cell count, that is, the body is less
resistant to infectious diseases.

In general, antithyroid therapy can significantly improve
state, to eliminate the disease symptoms in most patients, particularly when
to organize meals
in hyperthyroidism and most excluded, containing more products
amount of iodine.

Thyroid surgery and the removal of its modified parts
It shows a considerable increase and the presence of nodules. Usually it
preceded by antithyroid therapy aimed at reducing the level of hormones
thyroid in order to avoid a sharp fall after his intervention. After
the operation, the preserved part of the thyroid gland continues to produce
hormones and maintain the necessary hormonal balance. If doctors have
to remove most of the body more likely to develop hypothyroidism, and then
deficiency of thyroid hormones will have to compensate with the help of
hormone replacement therapy.

Surgical treatment is also used in the development of
serious side effects with antithyroid drug therapy, resistance to therapy
radioactive iodine, as well as the presence of suspected cancer.

Radioiodine therapy or treatment with radioactive iodine - the most common
treatment of hyperthyroidism. The patient receives a capsule with radioactive iodine,
which accumulates in the thyroid tissues and for 8-12 weeks
kills functionally hyperactive cells. As a result, the dimensions of the treatment
thyroid decrease, and it begins to produce less hormones.

Radioiodine therapy is recommended for patients older than 50 years and is held
in the event that there is no effect of antithyroid drugs, and if
application is limited to contraindications. Full recovery does not occur,
but the symptoms are on the decline. At times after iodine therapy for 1-10 years
develops hypothyroidism, but it is much easier to control than hyperthyroidism.

Patients with hyperthyroidism are under constant surveillance
endocrinologist. If treatment is started on time and matched appropriately, improving
health comes pretty quickly. Restoration of health contributes to
stay in rehabilitation sanatoriums, specializing in the treatment of cardiovascular
disease at least 2 times a year.