Home>Endocrinology>The causes and mechanism of development of diabetic foot

The causes and mechanism of development of diabetic foot

Diabetic foot is a severe complicationdiabetes, which develops in violation of the metabolism of glucose and insulin. This global metabolic disorder disrupts the internal organs, blood vessels and nerves.

Diabetic foot as a complication of diabetes

Diabetic foot (diabetic foot syndrome)- Is a medical term used to describe the complex pathological vascular changes, the nerves and musculoskeletal apparatus stops occurring on a background of diabetes, which can lead to the development of lesion limb gangrene.

Diabetic foot - a serious complicationdiabetes, which is observed in most patients with poor control of blood glucose (diabetes treatment failure). At the same time, people with diabetes should be aware of and adhere to a few simple rules of foot care to help prevent the development of gangrene and loss of limbs.

The mechanism of development of diabetic foot 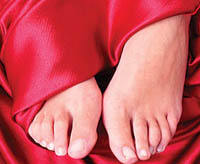 Diabetes is characterized by increased levels ofblood glucose. In healthy people, a constant concentration of glucose in the blood is maintained by a particular hormone, insulin produced by the pancreas in response to increased blood glucose concentration. Insulin sensitizing tissues for glucose and biochemical mechanisms starts its disposal. In diabetes, the insulin glucose regulation mechanism does not work. For type 1 diabetes, for example, tend to decrease the total amount of insulin produced by the pancreas and type 2 diabetes reduced tissue sensitivity towards insulin, and therefore, even in normal quantities it is not able to lower blood glucose levels.

This is extremely impaired glucose metabolismadversely to the body - with one hand tissues and organs begin to "starve" no insulin because they can not process glucose, on the other hand unused glucose accumulates in the blood vessel seeps into the wall, accumulate in the extracellular medium.

Because in our body all types of exchangesubstances linked, shortly after impaired glucose metabolism (carbohydrate) break down the metabolism of fats and proteins. This global metabolic disorder disrupts the internal organs, blood vessels and nerves of the patient with diabetes.

Causes of diabetic foot indiabetics are rooted in violation of the blood supply and innervation of the leg. Metabolic disorders (increased blood glucose levels, impaired metabolism of fats and proteins) lead to shock small blood vessels and nerves supplying all body tissues, including tissue and legs. Because of its remoteness from the heart, the distal leg department (foot, ankle) are poorly supplied with blood even in healthy people. In diabetic patients, diabetic angio - foot and neuropathy (nerve damage and vascular) permanently disrupt the power to the body portion of fabric that will soon lead to the formation of tissue trophic changes and significantly increases the risk of gangrene.