Home>Eye diseases (ophthalmology)>An excerpt from the book "Can kisses prolong life? Oddities of our body and behavior "

An excerpt from the book "Can kisses prolong life? Oddities of our body and behavior "

Dr. Stephen Juan - Anthropologistteacher, journalist. He knows everything about the features and oddities of our body: from the top of the head to the heels. In his book, Stephen Juan is ready to answer all the questions of his readers; give facts - from those that are on hearing, to the most surprising and unexpected. We publish a small excerpt from the book “Can kisses prolong life? Oddities of our body and behavior ”, specially provided to the MedKrug website by the RIPOL Classic publishing house.

Is it true that people with strabismus looks at the world
differently?

(Michel Dyurinks of Leiden, the Netherlands) 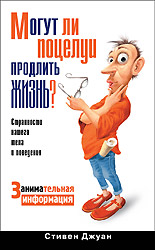 The medical name kosoglasiya - strabismus; himalso called strabismus. Contrary to popular belief, the squinting eyes of man can be directed not only inside but also outside, that is, there is a convergent and divergent strabismus.

The word "strabismus" comes from the Greek word"Strabismos" meaning "squinting". From a medical point of view, this chronic violation of the parallelism of the visual axes, that is, when the eyes look in different directions. Depending on these trends and distinguish types of strabismus. All their names pronounced root "trails", derived from the Greek word "tropos", which means "turn", and the prefix defines the nature of this turn. If the eye is rotated relative to the axis of the other eye, then it is "tsiklotropiya" ( "tsiklos" in Greek means "circle"). If the eyes are directed inward, it is "esotropia"
and if they diverge outwardly, this "exotropia". There are cases when one eye is pointing upwards ( "Hypertropia") or down ( "hydrotropes").

The direction in which the pupil of the eye is looking,regulated by the muscle of the eyeball. For strabismus characterized by inconsistency between the different eye muscles - in this case, the eye can not properly focus on a single object and disturbed binocular vision. The brain can not compare the two images into one, and this often develops nearsightedness or farsightedness. In infancy, congenital strabismus may lead to amblyopia, ie, to a state where the brain does not see the picture from the squinting eye, although he is capable of normal vision. Sometimes strabismus in children is "false", when due to a too wide nose or the kind of cut eyes parents
it seems that the child is "decimated." This condition is called "false strabismus" or "psevdostrabizmom". As the skull of a child develops, the bridge is narrowed and possible creases in the corners of the eyes are straightened. No problems with vision in such a child is not observed, although in any case it is better to consult a doctor who
the correct diagnosis. During the test, the doctor directs a beam of light in a child's eyes and his reflection from each of the pupil determines the direction of view for each eye.

Which is worse: to read in the dark or at a close distance from the eye?

Continued concentration on the eyenearby objects more harmful than the lack of illumination. This is the conclusion arrived Dr Michael Lawless, who explains his thesis: "Under the closely spaced objects refers to objects that are closer at arm's length, which implies activities such as reading, playing computer games, computer work and homework" . Doctor
Lawless says that Taiwanese researchersWe found a link between long-term concentration on the eye located close to them subjects and the development of myopia in children. According to research by Dr. MA Bullimore and colleagues, one of the four risk factors of myopia in adults - a "long period of time is spent on their occupation, requiring a concentration of view on close objects."

If your feet every day doing the same work as that of your eyes, you would have had to run 80 km every day.

Some researchers believe that too tight to tie a tie a man risking his eyesight.

How soon will invent an artificial eye?

One researcher from California, predictsthe appearance of the artificial eye in the near future. Dr. Armand Tanguay is currently working on the creation of the first-chamber implant for the blind. It also predicts the creation in 2014, the implant consisting of thousands of electrodes, which enables the blind to recognize faces and read letters the size of 1.5 cm.

Can the blind distinguish colors by touch?

German scientists puzzled one case, illustratedon television, when a certain blind woman says it can "see" color touch - at least, it distinguishes one color from another. Sorokavosmiletnyaya Gabriele Simon from Wallenhorst demonstrated their abilities on the popular German TV show Wetten
Dass. Blindfolded feeling the fingers autbolki and blouses, she said: "In order to improve their skills it took me twenty years. This combination of learning and concentration. This ability allows me to choose the dress itself, without the help of a mother. "

What is "inattention blindness"?

Have you ever asked yourself the question: as the magician manages to hold the spectators, even if he does their focus right in front of the eyes of some observers? No matter how you strained attention, you will still not be able to notice the deft hand movement, perform tricks. Many of us believe that, if you look very closely, we will note all the details. But this is not the case is proven by numerous experiments the researchers. . Dr. Daniel J. Symons wrote: "Although we intuitively believe that the bright and eye-catching objects necessarily possess our attention very often it does not. For example, the drivers do not see another car during a turn or a person seeks out a free seat at the movie theater, not to notice his friend, even if he waves his hand to him. " This phenomenon is called
"Inattention blindness" or "perceptual blindness." Some of the obtained during the investigations of the facts rather curious:

Several theories have been put forward to explain this phenomenon, among them the following:

Why is the flash at the time of blinds?

The light flash is so bright that it is on time"Overload" light-sensitive rods and cones of the retina. Even after the return of the ability to visually flash effect persists for some time. To a lesser extent the same is true, if you leave the dark theater into the bright light of the street. The eye has an amazing ability to adapt to different lighting, but for this he needs a few seconds to a few minutes. According to Dr. Kenton McWilliams, an average human
eyes fully adapt to significant change in the coverage of about 25 minutes.

Why is better seen under water in swimming goggles?

Probably every one of you noticed that the spoon,placed in a glass of water appears bent. When light rays pass from one medium (e.g., air) into another (e.g., water), they change their speed. In water, the light moves at a slower rate than in the air, and as a result the light beam changes its direction. This phenomenon
It called "refraction." The degree of refraction depends on the ratio of the speed of light in each of the environments.

The human eye is arranged so thatLight rays coming in through the pupil, is focussed on the retina at the back of the eye. At the same time it is adapted for vision in air and not water environment because throughout its history, people have a lot more time on land than in water. Under the water the angle between the rays in the water and refracted rays inside the eye a slightly different, so they are not focused where it is necessary. Wearing glasses, a man returns to his usual combination of "air - eye," so that by this return to normality
vision. The phenomenon of refraction of light at the interface of two media is used in devices such as glasses and contact lenses. The lenses refract light so that it falls on the retina at the correct angle - thus manages to correct vision with myopia or hyperopia. Of course, it depends not only focusing on a
angle at which the rays enter the eye. The focusing ability of the eye depends on the ciliary muscles of the eye, located around the eyelids and eyelashes.