Probably each of us felt heartburn, especiallyafter a hearty lunch. But this is not unique to our style food. It is known that in Western Europe and the United States 40-50 percent of the people all the time, although with varying frequency, have the same complaint. And they suffer and complain about the discomfort, not only children but also adults.

In recent years, the world's number of patients withsevere inflammation of the lower esophagus - reflux esophagitis - increased by 2-3 times. For this reason, among gastroenterologists even appeared saying that the XX century - a century of peptic ulcer disease, and XXI - reflux esophagitis.

We can say that this sign - a message of the body of certain digestive problems. in short "heartburn" generally called the feeling of a strong burning sensation inesophagus, which is localized behind the breastbone. In most cases, she appears from the increased acidity of gastric juice, but sometimes characterized by a reduced acidity or even complete absence of gastric hydrochloric acid. The cause of heartburn may be a failure of the cardiac sphincter (ie, muscular ring that covers the lower part of the esophagus at the point of transition to the stomach). If sphincter functioning normally, its main role to prevent the flow of stomach contents into the esophagus. When something "not this way", Any of the stomach contents, getting on the esophageal mucosa, will cause a feeling of heartburn. There are still cases when heartburn becomes one of the signs of neurosis.

This term is called spontaneous, regularzakidyvanie the esophagus gastric or intestinal contents, which causes damage to the lower esophagus and the appearance of symptoms such as heartburn, pain and digestive disorders. Under normal conditions in the lower third of the esophagus acidity level of the pH is 6.0 (this can be determined by such a method of inspection esophageal pH monitoring). The presence of reflux indicates pH <4.0 (acid reflux) or pH> 7.0 (alkaline, bile reflux) As in one and another case irritating content that throws up into the esophagus, causing inflammation of the mucosa of the lower shell third of the esophagus - esophageal reflux.

"Iceberg" disease - so a word scientists callthe prevalence of this disease. The fact that it is quite difficult to follow because a proportion of those who suffer reflux oesophagitis, unfortunately, is in "underwater" part of the iceberg. In most patients, the symptoms are mild and occur infrequently. Such people do not go to doctors, and independently take antacids or use the advice of friends (the so-called "telephone" reflux). These patients constitute the underwater part "iceberg". Medium water part - it's sickreflux esophagitis with severe or persistent symptoms, but without the complications that need to carry out regular treatment, so to speak, ambulatory reflux. Finally, the tip of the iceberg - they are people who have developed complications (peptic ulcers, bleeding, narrowing of the esophagus) - hospital reflux.

For example, among the US adult population frequency of heartburn - the primary symptom - amounts to 20-40%, but only 2% of these patients are treated on this occasion.

Since the pressure in the stomach is alwayshigher than in the thoracic cavity, the zakidyvanie stomach contents into the esophagus (reflux) would have to be generally constant phenomenon. But, thanks to the mechanisms of the cardiac sphincter, it occurs rarely and only for a short time (say, twice per day for at least 5 minutes). Therefore, normally such brief zakidyvaniya stomach contents are not considered as a pathology.

What happens in the event ofdisease? Lack of cardiac esophagus is common in newborn babies. This is due to the immaturity of the neuromuscular apparatus, a characteristic that age. Infants frequently regurgitate what is happening by getting gastric contents with the air outside due to physiological immaturity of the stomach and esophagus. Stomach like a baby bottle uncorked, and the role "traffic jams" in this case, just playing the cardiac esophagus.

In older children incompetence of cardiaIt arises because of barriers, both incoming and outgoing sections of the stomach. Reflux esophagitis is a fairly common symptom of gastritis, gastroduodenitis and peptic ulcer disease. The reason for his appearance in this case becomes a constant increase intragastric pressure, and decreased motility of the gastrointestinal tract (spasm, hypertonicity). By the way, dysmotility of the digestive system may occur in response to a stressor, especially if your child is sensitive to environmental factors.

Obesity in childhood is unfortunately becoming more common, but it is already allocated as a factor that can lead to reflux esophagitis.

In another situation, the appearance of persistent symptomsthis disease causes hiatal hernia, when the too wide opening last stomach gets that normally there should never be. Increased intra-abdominal pressure from prolonged bloating the child or the presence of abnormal fluid in the abdomen may also cause zakidyvanie stomach contents into the esophagus.

Scientists have shown that the ingestion of saliva whichIt has an alkaline reaction is a safety factor with respect to occurrence of reflux esophagitis. Therefore, if a child has a decrease in salivation and increased dryness in the mouth - is also a factor which may contribute to the emergence of diseases of the esophagus.

There are a number of foods that "support" zakidyvaniya frequent stomach contents into the esophagus. It is popular among children citrus fruits, chocolate, tomatoes, fatty meals. As for adults, they are at risk of drinking coffee, alcohol, smoking. The fact that all of these products lead to relaxation of the lower esophageal sphincter and certainly a frequent occurrence of reflux. A similar effect given some medications, such as nitrates, nitrites, aminophylline, sedatives, hypnotics, and prostaglandins.

Among the main symptoms of the disease valueThey have the appearance of a child burps, frequent regurgitation, regurgitation (burping air), sometimes in infancy - vomiting milk. If the baby lift in the vertical position, the display is always decreasing, but after the next feeding appear again. In lying position such signs are always amplified, so the parents can help the child often enough, a little lifting the edge of his cot, where the baby's head. It really is one of the areas of treatment of the disease.

In older age, children often complain of heartburn,sour belching, burning sensation behind the breastbone. These symptoms often occur after a meal, the body tilts forward or night. But for typical children it is that they are worried regurgitation often than heartburn. Dangerous is the emergence of such a feature as the presence of the morning on the pillow wet spot baby. This means that on the night in a horizontal position, as a result of the weakness of the cardiac esophagus, stomach contents was zakidyvanie and regurgitation. In adults and older children the second most common symptom of this disease is chest pain. It often pays to interscapular area, neck, jaw, left half of the chest and can even mimic angina. Sometimes the kids complain about the sudden cramping pain in the stomach. It manifests itself spasm of one of the last sections.

To detect gastroesophageal refluxtoday use quite different methods. Thanks to X-ray of the esophagus, it is possible to fix the contrast from entering from the stomach into the esophagus, or find a hiatal hernia.

A more reliable method is prolonged esophageal pH monitoring (measurement of acidity in the esophagus lumen with a probe). This allows you to set the frequency, duration and severity of reflux.

And still the main method of diagnosis of reflux esophagitis - endoscopy. It can help you get the confirmation of the disease and determine the degree of its severity. 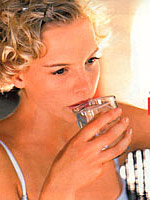 If symptoms appear in a childinfants, the main treatment is care. First of all, you need to feed your baby only in the semi-erect position. Immediately after taking the baby food should be held vertically for 1-3 minutes. When the time of weaning, it should be slightly thicker consistency

The older children in the first place, of course, will betreatment of the underlying diseases - gastritis, gastroduodenitis, peptic ulcer disease or neurosis. This process should be aimed at reducing the severity of reflux, reducing the harmful effects of stomach contents, which throws into the esophagus, esophageal mucosal improving sustainability and the ability to quickly clean it.

First of all, the general recommended activities foreliminate pathological zakidyvaniya of gastric contents into the esophagus - to lift the end of the bed where the baby's head, do not go to bed immediately after taking food, limit consumption of fatty foods, chocolate, tomatoes. With the ineffectiveness of such measures prescribed antacids - medicines that reduce the acidity of gastric and esophageal contents. Patients with erosive and ulcerative esophagitis recommend and antisecretory drugs (H2 blockers, proton pump inhibitors).

This group of drugs as a prokinetic increasethe pressure in the lower esophageal sphincter and reduce intragastric pressure (due to the resumption of gastric resistance to receiving food, improve gastric emptying due to normalization of motility of its individual parts and duodenal ulcers, duodenal reflux elimination).

Therefore, a disease of the XXI century - reflux esophagitis - can be overcome. But the basis for this should be the absence of other diseases of the digestive system.