Gynecology
by admin
Sometimes, before or during pregnancy her doctorswoman reported that a caesarean section - a unique opportunity for her to give birth. In such cases, the expectant mother should be not to panic, but to rely on a competent medical opinion, because she herself is often not able to adequately assess their own state of health and the possible risk to the child.

Cesarean section - a surgical operation, withwhose child is dissected through the abdominal wall and the uterine wall. Like any other, it is performed only for medical reasons. Fear of the future mother in front of the natural childbirth is not a reason for her to do the operation. Today, almost one in five children is born with the help of this operation, which gives many women a chance to be happy moms.

Sometimes, before or during pregnancy her doctorswoman reported that a caesarean section - a unique opportunity for her to give birth. In such cases, the expectant mother should be not to panic, but to rely on a competent medical opinion, because she herself is often not able to adequately assess their own state of health and the possible risk to the child.

List of indications for surgery approvedRussian Ministry of Health, is quite extensive. They are divided into two groups: absolute (when labor is not physically possible, either by the mother or to the fetus) and relative (factors that are not related to pregnancy, but can harm the mother or the child). For example, refer to the first:

To save the life of the baby, and sometimes the mother,doctors have to act very quickly - the account goes on a minute. From such extreme situations are not insured by any one woman, which is why doctors are opposed to carrying out home deliveries. 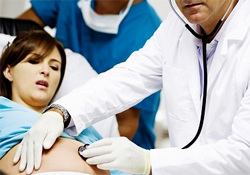 Elective surgery is carried out in terms of the mostclose to the intended time of natural birth. Often pregnant comes to the hospital already with light contractions. In case of serious complications a woman offer to go to the clinic in advance to spend the last week under the supervision of.

The date of the operation is assigned. The last meal should be no later than 6 pm on the eve of the day of surgery. This is necessary if the operation is planned to be performed under general anesthesia. In any case, you will have a conversation with the anesthetist who will give detailed recommendations on the intake of food and water. As before any other operation, a cleansing enema is done the night before. To a woman slept well before an important day for her, she is given light sedatives.

Before the operation in writing the futurethe mother must consent to cesarean section and anesthesia. Do not forget to warn the anesthesiologist if you have had an allergic reaction to any medicine, and tell which drugs you took yesterday.

In modern clinics during plannedCaesarean section is used epidural (epidural) anesthesia, as well as general intravenous or endotracheal anesthesia. The final word, a pain relief method you choose, there is a doctor, depending on the health of women and baby.

General anesthesia is administered through a vein, after which the woman falls asleep. With such a method, a woman in labor analgesia is unconscious and can not take part in the events.

Enodotrahealny anesthesia also introduces humancompletely into a deep sleep, but it is given by inhalation through a mask or special respirators. In cases of difficulty breathing occurs in a patient or a gag reflex anesthesia through endotracheal tubes do. This type of anesthesia reduces the dose of administered drugs.

at epidural anesthesia medicine is injected into the epidural spacespine through the catheter. Woman in labor feels pain in the lower part of the body (although some sensation in her still remain), but remains at the time of the operation in full consciousness. It can not follow the manipulation of doctors (the place where the operation is carried out, fenced off with sterile sheets), but she hears the first cry of the baby, has the ability to immediately after birth to make it to his chest.

Each type of anesthesia hasContraindications. For example, an epidural can not be carried out under severe neurological diseases, infections, bleeding disorders. To identify possible contraindications for some time before surgery should be screened to see a therapist, cardiologist, get tested. 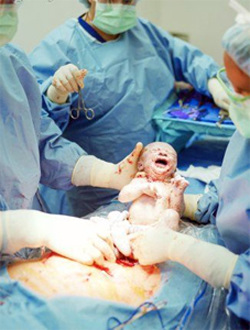 As a rule, appointed for a planned operationtime coming after bypass. In traversing the doctor again makes the inspection, after proposed to prepare for the operation (to wear a special shirt), at the appointed time a woman transported on a gurney to the operating room and moved to the operating table. And make final preparations before surgery: cover sheet, measure pressure, a catheter is inserted into a vein for administration to the hands of drugs, including anesthesia. Using a catheter avoids the set shots and quickly enter the dates of medicines in emergency situations.

Next, the woman is given anesthesia, the dose isdesigned so that the impact on the child to a minimum. When he begins to act over the hairy part of the pubis is a transverse skin incision, followed by team-readiness of the uterus neonatologists (cut along the belly from the navel to the pubis is done only in the most extreme cases, such as when the uterus is already more scarring or surgery is done unplanned in urgently). This seam is considered to be the most physiological and cosmetic. The seam on the uterus stitched thread that resolves itself in 3-4 months. Usually by the sixth to eighth postoperative day subcutaneous thread is removed (a procedure is absolutely painless, but unpleasant if you are afraid, it is better to turn away and not look).

During surgery to prevent complicationsthe woman is given a single dose of broad-spectrum antibiotic that is completely eliminated from the body within 12 hours, so that the very next day you can start feeding your baby.

Twenty-four hours after the operation the woman holds in the Houseintensive care, where he watched her pressure, pulse, temperature, uterine contraction. On the belly put a container with ice. Of the drugs she receives: an analgesic, injections for uterine contractions and drip with saline solution to restore fluid lost during surgery.

Cauterized doctors offer morea few days, but if a woman feels good, very soon it will be able to give them up. On the first day after the operation it is allowed to drink non-carbonated mineral water with the addition of lemon (the latter may only be added if the baby is not an allergic reaction). 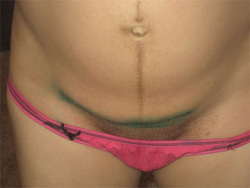 If all goes well, the woman on the second daytransferred to the general ward, where she can get up, walk, feed the baby, and even their own to care for them, if the hospital has the House "mother and child".

According to the protocol translation in the General DivisionIt allowed only 4 days after surgery, but in practice it is often from receding. From personal life acquaintances know that on the 5th day of their already discharged home with the kids.

At this time, you need as much as possible to put the baby to the breast, so that he received the first drops of colostrum.

Particular attention is paid to the restoration work of the intestine after anesthesia. To "help" him to work in the early days can make stimulating injections.

On the second and third day after the operation can alreadyeat low-fat broth, ground meat, cottage cheese, cereal. When adjusted intestines work, allowed to go to her usual diet, taking into account the fact that it is now a nursing mother.

The earlier a woman begins to move, the soonerIt will recover, it is believed that this will also reduce the risk of post-surgical adhesions in abdominal adhesions but unfortunately inevitable. It is necessary to take care of the postpartum or post-operative bandage, which will facilitate the movement (need to put it as needed). In the absence of complications, in consultation with your doctor, you can begin to perform simple physical exercises (to avoid excessive loads).

Extract after such an operation is done for 5-6 days under normal condition of mother and baby. During this time women have, for 2-3 hours is USTo make sure uterus reduced fine seam and the operation is done securely. While it may not be necessary if the alert and careful examination gynecologist ultrasound.

Status of women is estimated for the sameprinciples as normal after childbirth. Basic requirements - it's soft breasts (the ability to express the excess milk after exposure), normalize bowel work (regular chair), uterine contractions and normal discharge (lochia) - they are similar to normal menstruation: the first 2-4 days after birth and abundant every day going to decline (for a total duration of lochia about 6 weeks).

Here you are at home! 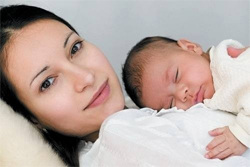 It is better if a woman, at leasttwo or three months after the operation will not raise anything heavier than your baby (do not move the tub with water, not to carry the stroller up the stairs and, of course, forget the "sacks of potatoes"). Wash the first time only in the soul, and with a dip in the tub and the pool will have to wait until the seam is not completely healed.

With regard to sexuality, there havewait six to eight weeks. It is believed that the time of cesarean section baby does not pass through the birth canal, the woman can not take into account the advice to refrain from sexual activity for two months after delivery. But it's not right. This abstinence rather required to restore the elasticity of the uterus, rather than vaginal muscles. Plus, at this time there is a risk of ascending infection.

Particular attention should be paid to contraceptionBecause the doctors do not recommend re-planning pregnancy within two to three years - that is the time needed by the body to fully recover.

In conclusion, we note that the medicine is notIt stands still, and under certain circumstances once a caesarean is not an indicator to the same method of the birth of subsequent children. Birth of second and subsequent children is entirely possible, and in a natural way. The main argument - the presence of adhesions and the consistency of postoperative suture in time delivery.