Home>Gynecology>What you need to know about childbirth

What you need to know about childbirth

Gynecology
by admin
Birth of a child - it's completely naturalphysiological process. Almost all women go through it. To behave properly during labor, you need to know exactly how this process takes place. We will consider all sorts periods - from labor until the newborn. For future moms can know what to expect in this time period.

Birth of a child - it's completely naturalphysiological process. Almost all women go through it. To behave properly during labor, you need to know exactly how this process takes place. We will tell our readers a site about all stages of labor - of labor until the newborn. For future moms can know what to expect in this time period.

After 9 months after conception the fetus reachesthe final stage of development, which allows it to survive outside the mother's womb. It is authentically not known that it awakens the process of childbirth, but it is clear that it is associated with the completion of development of the fetus. Preparation for childbirth begins at last weeks of pregnancy. Hormones found in maternal blood, domuscle and ligament soft childbearing channel, allowing them to stretch during childbirth. The adrenal glands produce a special kid hormones, corticosteroids. They prepare the children's lungs to spontaneous breathing, stimulating the generation of an organism a special substance (surfactant), which prevents sticking tiny alveoli. When premature birth when this substance is not formed, the child can not breathe their own light for a long time after birth. Corticosteroids also cause the production of large amounts of glycogen carbohydrate (animal starch) accumulated in different parts of the body. Some of it is in the heart muscle, keeping the heart with insufficient intake of oxygen in the blood during childbirth. 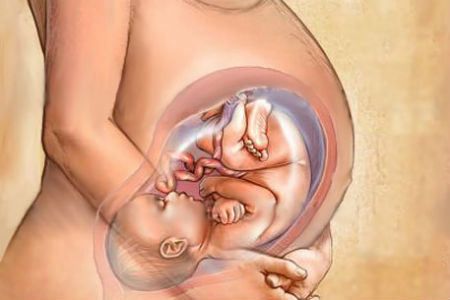 Then, over the last month, the headbaby drops into the pelvis. This situation is called cephalic. Now, the growing child begins to stretch the wall of the uterus. It irritates her muscles at the same time, the omission of the fetus in the pelvic cavity stimulates the pituitary hormone oxytocin mother, under whose influence the uterine muscles begin to shrink - come the so-called closed complex battle-Hicks. They have a periodic nature and, despite the fairly pronounced effect painless. Unlike true labor contractions, contractions in a closed complex-Hicks pretty quickly cease.

The first stage of labor

During the first period, the lion's share of effortaccounts for cervical opening. He is the longest. And it can last for several hours, until the waters recede (amniotic fluid in which the newborn was all of 40 weeks). Status checks the doctor every four hours. The cervix must open by 10 cm or 5 obstetric fingers.

The child lies with his own chest pressed against the cage head and gradually sinks deeper into the pelvic cavity.

Signs of labor can serveongoing struggle, which are becoming more prolonged, intense and frequent. Stretching the body of the uterus along with oxytocin may play a leading role in the initiation of labor. Her muscles become sensitive to this hormone, and with increasing amounts of oxytocin in the blood to a critical level starts fights. The woman in this moment feels pain in the abdomen and the nagging pain in his back. The abdomen becomes hard as stone, it means that the muscles contracting and push the fruit. If a woman has this hormone is produced by small and bad, the doctors use synthetic oxytocin (ie do intramuscular injections with "oxytocin" drug).

During the second period occursdirectly childbirth - the expulsion of the fetus. On average, it takes about an hour, rarely more than two. After the full opening of the cervix regular waves of strong contractions of the uterus begin to go along on its top. At this point, the woman should make an effort. In one battle, there are three attempts. In order to make things right, the woman should listen to your doctor and midwife, they tell us how to breathe properly and when to start to push. During the first stage of labor the baby lying on its side. Once the head begins to pass through the pelvis, it is rotated so that its face is towards the back of the parent. 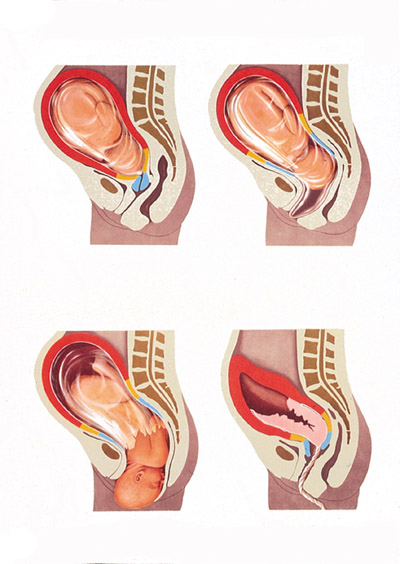 This movement makes it possible to easily pass betweenpelvic bones. With each new battle child is pushed further and further down the birth canal, the threshold of the vagina is stretched and head out into the light. At this point, the rotation of shoulders, that is a child again turned on its side. 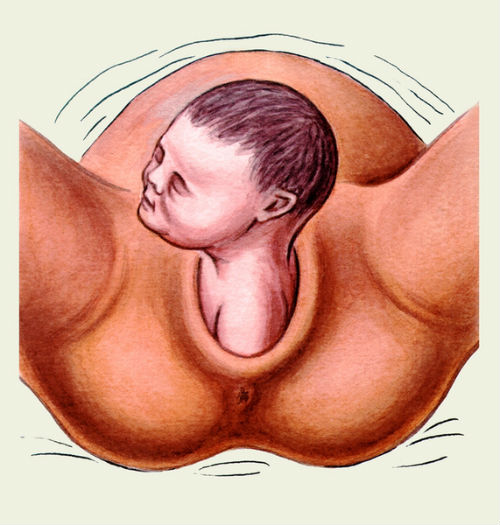 At this point, a woman needs to gain strength and good tighter, that the child was released in full, shoulders and body are born quickly, as they are much smaller than the head.

In the last stage of labor separated childrenplace (placenta, through which nutrients from the mother to the child received all of 40 weeks). The placenta begins to flake off from the wall of the uterus immediately after the vigil of the child, as he no longer needs the entry of oxygen from the mother. Usually afterbirth is expelled within 20 minutes after birth. Sometimes the midwife helps to separate the children's place, pushing the stomach during the attempts of women. 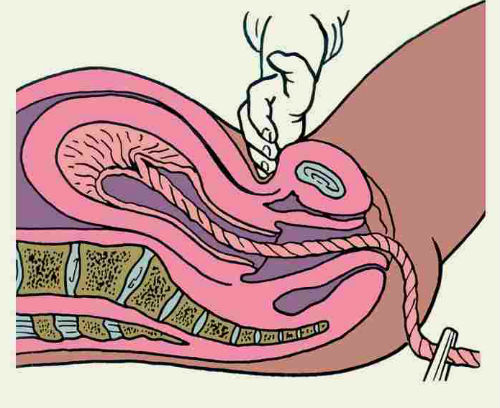 Even a normal delivery - this is a painful process. Breathing exercises, learned during pregnancy can ease the pain. But a more effective method is considered - the introduction of the first period of pethidine delivery. The drug takes effect in about half an hour. If necessary, epidural anesthetic is administered (in spinal cord, at the location where the sensitive nerves uterine fit thereto). The disadvantage in this pain relief is what is blocked not only the pain but also other sensitive signals. Therefore, it may decrease the activity of the natural in childbirth during the second period.

Increase pressure.
At the same time women appear swelling. In urine analysis shows that the protein is increased. There is a growing toxicosis. All this can lead to preeklampsicheskoy toxemia (PET). PET reduces nutrient supply to the child.

It is not enough wide vagina.
At the same time the child's head is hard to get out. In this case, a episiotomy (an incision of the perineum in the side). After birth, it was sutured. After a mini-surgery women can not sit straight, you need to gently land on the side, which remained intact until the sutures heal.

The lack of oxygen.
Each uterine contraction ceases the supplychild oxygen. After each attempts doctor should listen to baby's heartbeat through the mother's abdomen. There is a special tube for this. But now many of the hospital equipped with special electronic equipment, which greatly facilitates the work of doctors and obstetricians. When lack of oxygen taken measures such as oxygen inhalation mother and turn on your left side. Lack of oxygen can cause by displacement umbilical cord around the neck of the fetus. Such children, often are restored quickly.

Breech.
When a baby is born head, itIt stretches the vagina so that the shoulders of the body and easy to pass. And when the first on the light there legs or pelvis (and they are much smaller than the head), the head can pass with difficulty.

In extreme situations, when the state of the mother or child is at risk, doctors perform an operation known as cesarean section. Under general or epidural anesthesia the abdomen was opened, and then to the uteruschild's removal. After the operation, which lasts about 45 minutes, all sewn up. If no complications not, the recovery occurs up to 20 days. Caesarean section is sometimes planned physician beforehand (narrow pelvis, large fruit, repeated Caesar cross-presentation).

Most often, the umbilical cord is cut and tied off after the onset of spontaneous breathing. Sometimes doctors pulls her after pulsation.

At the birth of a child covered with whitishmucus (this lubrication, due to which it was easy to go through all the stages of labor, as it helps to slide through the birth canal). The skin appears gray, sometimes cyanotic. A few minutes later, when his obotrut diapers, newborn becomes pink. Sometimes you need to help make the first breath child. To do this, doctors use a variety of means. But basically there is no need for this. Cold air (compared to the "warm and welcoming womb") and lack of oxygen stimulates the first to breathe on their own. Immediately after birth (assuming that everything is fine) baby mama spread on his stomach and put to the breast. Baby sucking stimulates the production of oxytocin in the mother. It contributes to the reduction of the uterus, to separate child seat. For 2-3 days the mother will be allocated colostrum. It is not as fat as milk, but this is a newborn at this point enough. Initially, the child's weight will be lost. And on the 10th day of the newborn is gaining weight, so that was at birth.