Do you believe that alcohol increases appetite, relieves stress, lowers blood pressure? And are you sure beer is not alcohol? Then this article is especially for you.

Myth 1. With alcohol, you can quickly warm up

Alcoholic beverages are often called intoxicating. Why? People believe that alcohol has warming effect. And to the frozen man a sip of something good - the best medicine.

In such an assertion contains only a smallbit of truth. The fact that cooling helps approximately 50 grams of vodka or brandy. It dilates blood vessels and normalize blood flow to internal organs. Subsequent doses of alcohol increase the blood flow in the skin. She blushes there is a pleasant feeling of warmth. But it is very misleading - in fact in this case the heat transfer is enhanced, and the body begins to cool down even more. And a man saved a subjective feeling of well-being. So the warming effect of alcoholic beverages is very exaggerated.


Alcohol actually stimulates the appetite. But the appearance of a slight feeling of hunger provoke only hard liquor, and then only small quantity. It is about 20-25 grams of vodka. It affects the center of saturation and activates it. This whole process takes about 15-20 minutes, no less. So drink right before the meal is fundamentally wrong for the appetite. Because hunger does not appear for a few seconds: it takes a longer time.

Besides alcohol before a meal - do not yield theirposition. Alcohol will behave aggressively towards a hungry stomach mucosa. He will suffer from hydrochloric acid production which will also increase. As a result, may develop gastritis. Is it too high a price for with an appetite to eat?


Often tired people try to cheer yourselfmood with the help of alcohol. But in most cases this is done correctly. After all, drinking should be quite a bit - 20-30 ml of vodka or cognac, or 40 ml of wine or a martini. Such small doses removed internal stress and help relax. What, in general, it corresponds to the concept - to relieve stress. Unfortunately, most often used for this purpose much more significant amounts of alcohol. And here the scenario could develop in two ways. First - aggravated by fatigue, decreased mood, there is a kind of depression, which only heightens the sense of internal fatigue. Second - it's alcohol euphoria, which inevitably ends too depressed. Neither is any other case, the release can not speak of stress. So if we get rid of this trouble with alcohol, then this should be done wisely.

Many believe that under the influence of alcoholIt worked better than usual. We are not talking about the average, much less of a heavy degree of intoxication, when blunted all the reactions and feelings. This refers to the slight degree, in which activated thought processes. But the feeling is absolutely subjective, and it was recently proven by Australian scientists. With the help of experiments, they have come to an interesting conclusion. It turns out that slightly intoxicated people thought speed and motor responses could actually increase. But these reactions are often wrong. In addition, even small doses of alcohol cause a reduction in concentration and the deterioration of the quality of reasoning.


Thus, the degree work under our own peril. Maybe work will be done and faster, but it will certainly appear different kinds of errors.

Many hypertensive think that the lower the pressureby using alcohol. He supposedly dilates blood vessels ... This statement There is some truth - small doses of alcohol drinks actually weaken the tone of the vascular wall. But along with this they increase heart rate. A blood pressure depends on blood volume, "ejected" into the bloodstream. How this amount the more the pressure is higher. Therefore, alcohol in no case can not be considered a cure for hypertension.

The situation is exacerbated by the fact that manyalcoholic drinks contain biologically active substances. These compounds may themselves influence the blood pressure, and in most cases adversely.

Myth 6. Qualitative alcohol does not harm

Any alcohol has on the body toxicact. This is due to the fact that one of the decomposition products of ethyl alcohol - acetaldehyde. It was he who works in the body the various outrages. But the poor quality alcohol affects the body is even worse. After all, cheap strong drinks do not pass the proper cleansing, they contain fusel oils, which are many times increase the toxic effect of alcohol. The same can be said Beverage domestic production. And like good water was used and organic fruits and berries, but I still get a drink much more harmful than a similar purchase. And all because alcohol is very difficult to clean up at home. Of course, preference should be given to the known and expensive brands, but do not think that they will not affect the health.

Myth 7. Alcohol - a cure for the common cold

Many are being treated for a cold vodka - with apples, withhoney, than anything else. It is believed that such a drug, and the temperature decreases, and stops a runny nose and sore throat decreases. Whence is a belief - no one knows. However, for some reason, many believe that this an old Russian recipe and all our ancestors were treated in a similar way. It is possible that the ancient Russians fought the cold with the help of vodka. What is more important - the modern medicine does not recognize such a method.


Second, alcohol is not the best wayeffect on inflamed throat. It starts to hurt after the treatment even more. So do not believe in the healing power of vodka. But a small number of pre-warmed red wine can drink. It at least has the ability to stimulate the immune system. 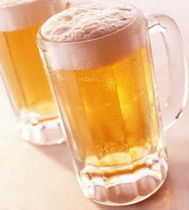 Now many people think that once the beer issoft drinks, it does not cause any harm to health. This catastrophic misleading. In the beer is really not a lot of alcohol. But this does not mean that this drink harmless. It is also an alcohol, and hence highly addictive.

No wonder in recent years more and more doctorsThey talk about the so-called beer alcoholism. In addition, the heady drink is very bad for the liver and heart. These organs undergo degeneration and begin to function poorly. Given all this, in no case be treated to beer as a lemonade. You can not absorb it daily liters. Such thoughtlessness is very quick impact on health.

Myth 9. Alcohol is not calorie

Many women have counted all the calories eaten. A drunk calories does not take into account. Meanwhile, alcohol has a very high energy value, and the stronger the drink, the more value it more. The highest rate in the vodka. Last nutritional value has not, calories are introduced only at the expense of alcohol. That is why from them is very difficult to get rid of.

A little different is the case with wine. Energy value of the drink partly due to the carbohydrates that are easy to split and burn easily. So wine is not so detrimental effect on appearance.

And yet any alcohol is very high in calories. This rule knows no exceptions, so before drinking, you need to think not only about his health, but also about the figure.

Myth 10. It should not drink and snack

Most of us believe that strong beveragesit is imperative to have a snack. And drink them in any case impossible. But this statement is not entirely correct. Here it is necessary to clarify what exactly Snacks are meant - hot or cold. Last weakly neutralized alcohol, he quickly absorbed into the bloodstream. The same thing happens when a person drinks some alcohol. So in that sense, juices, fruit drinks, fruit drinks can be put on an equal footing with fruit and vegetable salads.


Quite different is the case with hot andfatty foods, such as soups or stews. Those inhibit the absorption of ethanol reduces the severity of intoxication and therefore are considered the best snacks. With them is unmatched by any zapivka.