Diabetic coma is a severe complicationdiabetes. There is a diabetic coma on a background of low concentrations of insulin, which triggers a chain of biochemical reactions in the body. Glucose does not enter the tissue as an energy resource uses native fats develop ketoacidosis.


At the heart of diabetic (hyperglycemic) coma is insufficient intake of insulin. In fact, diabetic coma is a complication of severe course of diabetes.

The mechanism of development of diabetic coma

With a lack of insulin is disrupted recyclingglucose tissues, leading to hyperglycemia (elevated blood glucose), which gives the basic symptoms of coma. Deficiency of glucose in cells causes incomplete fat splitting, resulting in the body accumulate ketone bodies. Lack of glucose transport to the tissues leads to increased degradation of endogenous fat. In the liver is enhanced synthesis of ketone bodies and their oxidation is disturbed, leading to ketosis. Symptoms that occur in diabetic coma, caused by the development of giperketonemii (accumulation of blood ketone bodies). Ketone bodies have a toxic effect on the central nervous system causing acidosis (pH shift to the acid side of the medium), alter electrolyte balance, thereby marked loss of potassium ions, sodium, magnesium and chlorine. High hyperglycemia with polyuria (increased urine) causes dehydration of tissues. Hyperglycemia and ketoacidosis cause significant changes in mineral metabolism, which leads to the development of cardiovascular and renal disease.

Diabetic coma often develops in youngindividuals, as at this age diabetes is much greater than in the elderly. The origin of the coma are important factors such as delay in diagnosis of diabetes, insulin untimely cancellation or reduction of the dose, overwork, stress, accession secondary infections and so on. D.

The main symptoms of coma

For diabetic coma distinguish 2 periods- Prekomatosnoe state and to whom. Precoma usually develops gradually. Patients complain of general malaise, weakness, drowsiness, loss of appetite, nausea, vomiting, thirst, headache. In young patients often appear severe abdominal pain, which is the cause of dehydration. This can be a mistaken diagnosis of "acute abdomen". With the increase of these phenomena ketoacidosis achieve greater severity. There is a growing apathy in the air exhaled by the patient appears the smell of acetone, the skin becomes dry, there is itching. Dehydration leads to a decrease in circulating blood volume, resulting in tachycardia (rapid heartbeat), a tendency to lower blood pressure.

In the study of peripheral bloodshow leukocytosis (increased number of white blood cells), high hyperglycemia (increased blood glucose), giperketonemiyu (elevated levels of ketone bodies in the blood), azotemia (the presence in the blood of nitrogenous bases). In urine - glycosuria (excretion of glucose in the urine), reactions to acetone sharply positive. Absence of acetone in urine can not attach a diagnostic value, as this may be due to kidney damage in diabetes.

In the further course of the pathological processdeveloping diabetic coma, which can sometimes start without a period, harbingers. The patient becomes drowsy, difficult to answer the questions, and then stops responding to the surrounding, consciousness is slowly dying. On examination, the skin is dry, cold, red color face, sunken eyeballs when pressing soft, pupils narrow. Breathing initially frequent and deep, gradually transformed into Kussmaul breathing - a rare, noisy. Pulse frequent, weak, blood pressure is lowered. Notes at the outset is replaced by polyuria oliguria (a sharp decrease in urine output) up to anuria (absence of urine) due to a decrease in renal filtration by lowering blood pressure and kidney toxicity damage. This reduces the excretion of glucose and ketone bodies from the body, which contributes to deterioration. 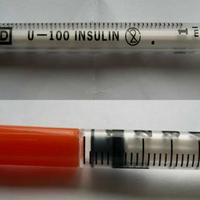 Prekomatosnoe and comatose patientsdiabetes requires their immediate hospitalization. The complex treatment includes insulin coma deficit reduction, the fight against dehydration, acidosis, loss of electrolytes. In the initial stage of diabetic coma must first enter insulin. Enter only crystalline (simple), insulin, and in any case not sustained release formulations. The dosage of insulin calculated based on the depth of the comatose state. Mild coma administered 100 U, in severe coma-120-160 units and deep-200 units of insulin. In connection with the violation of the peripheral circulation in the development of cardiovascular disease in the period of diabetic coma slows down the absorption of drugs introduced from subcutaneous tissue, so the first half of the dose of insulin should be administered intravenously by 20 ml of isotonic sodium chloride solution. Elderly patients, it is desirable to introduce no more than 50-100 units of insulin because of the threat of their coronary insufficiency. In precoma administered half the full dose of insulin.

In the future, insulin is administered every 2 hours. The dose is adjusted depending on the blood glucose level. If after 2 hours the blood glucose level increased, the administered insulin dose is doubled. The total amount of insulin administered to diabetic coma, ranges from 400 to 1000 IU per day. Along with insulin to be administered glucose which renders antiketogenic activity. Recommended to start a glucose after its level in the blood under the influence of insulin begins to fall. Enter 5% glucose solution intravenously. To restore lost fluids and electrolytes intravenously administered 1-2 liters per hour isotonic sodium chloride solution in combination with 15-20 ml of solution of potassium chloride, warmed to body temperature. Total administered 5-6 liters of fluid per day, patients older than 60 years, as well as the presence of cardiovascular disease - no more than 2-3 liters. To combat the acidosis is administered intravenously 200-400 ml of freshly prepared solution of sodium bicarbonate, which can not be mixed with other solutions. Displaying intravenous 100-200 mg cocarboxylase, 5.3 ml of ascorbic acid solution. To restore normal blood circulation and the work of the cardiovascular system, cardiac glycosides administered subcutaneously or intravenously 1-2 ml caffeine solution or 2 ml kordiamina.