Today, the phrase "Down's syndrome"It has become a common noun, which is often used as an expletive-Humorous expression. He can be heard from the lips of famous satirists and multgeroya, it is used in crossword puzzles, and articles in the negative, ironic meaning.

The first myth. Down syndrome is a disease, it is necessary to treat

It is not so: Down syndrome
It is a genetic condition that is determined by the presence in the cells
more human chromosomes.

The extra 47 chromosome causes
the emergence of a number of physiological features, due to which the child
It will develop more slowly and later their peers
place common to all stages of child development.

People with Down syndrome
They are not sick. They do not "suffer" from Down's syndrome, are not
"Struck" this syndrome is not "are its victims."

For example, a US citizen with a dark skin color today is not called a Negro, and expressed politically correct - black. We, with our mentality, it is the wish and will.


The second myth. Individuals with Down syndrome are not able to learn

it
not so: this myth is supported by studies that were conducted in
specialized institutions, but there is not any child can
effectively develop, because he is deprived of parental love main stimulus for the baby.

At the same time, living in the family, hopeless "
(According to doctors) baby in a year - he sits in two - walks, two with
half - she eats with a spoon and utters the first words in four - shows
your character learns to help at home, ready to go to kindergarten, and
then in school, speak a foreign language, master the computer and
do sport!


The third myth. A child with Down syndrome fetus antisocial behavior of parents

it
wrong: according to statistics one child out of 700 neonates appears on
light with Down syndrome. This ratio is the same in different countries,
climatic zones, social strata. 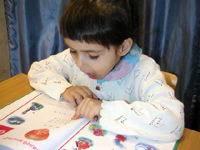 It does not depend on the lifestyle
parents, health, bad habits, food, income,
education, skin color or nationality. Boys and girls
are born with the same frequency. The parents in this case have a normal
set of chromosomes.


Myth Four. The family is divided because of the child with Down syndrome

This is not the case for other family reasons, break more often!


The fifth myth. People with Down syndrome are dangerous to society, showing aggression and

it
not so that people with Down syndrome are able to set an example of genuine
love. Typically, these people are kind and friendly. But everyone has his own
character and mood, it is changeable ordinary people.


Myth Six. People with Down syndrome are much less than in Europe

it
not the case in Europe, people with Down syndrome live in families are included in the
State aid program, and society treats them as
equal members.
We have 85% of families abandoning a child with
Down's syndrome in the nursing home. And the little man gets into
orphanages, from which he will never be released.
Therefore
way, created the false impression that we have people with the syndrome
Down is much less.


Myth Seven. With my family will not happen

This is not the case: a child can be born in any family, a genetic accident.


Myth eighth. A child with Down syndrome is better to be in a specialized institution under the supervision of specialists

This is not the case: there is a special term used to describe what happens to a child in institutional care syndrome
hospitalism. It is a violation of children's mental and personal
development caused by separation from the mother and baby stay in
an institution.

Hospitalism imposes a negative impact on
all areas of the child's personality, inhibiting intellectual, emotional and
physical development. And it has nothing to do with the presence or absence
Down's syndrome.