Reasons for anxiety, fear in our lives is more than enough: it scares potential loss of life, reputation, wealth, health - and your loved ones ...

Answer anxiously threatening situationdefinitely useful. Adequate anxiety warns of the danger of injury, pain, punishment, separation anxiety; the threat of position in society, harmony in the family. This anxiety causes a person to act - in order to avoid danger, or at least neutralize its effects. We are sitting on the books the night before the exam; hurry, late for a business vsteche or last train; take with pepper spray. Anxiety is necessary and omnipresent: worry baby, staying in the kindergarten without parents; teenager on a first date; mature man meditating on old age and death. Anxiety normally accompanies growth, changes or experiences something new, unknown, and the search for his personal role and significance in life.

But imagine that you can not explain themselvescurrently the cause of suddenly surging fear. You cease to rule over their feelings, fear begins to control you, rational arguments about its groundlessness and the need to "control himself" powerless ...

The symptom of pathological anxiety - an integralpart of psychosomatic medicine and psychotherapy practice. It is defined as an extremely uncomfortable, often vague feeling of apprehension or fear of something terrible, but inexplicable. Pathological anxiety always an inadequate response to real events surrounding both in intensity and in duration. This symptom rarely disappears on its own; usually require skilled care.

What could be the anxiety disorders

Panic condition - sudden attacks of fear,occur, especially at the beginning, without any objective reason. They are accompanied by thoughts of impending death or pomeshatalstve, accident; there is shortness of breath, dizziness, heart palpitations, tremors, sweating, nausea and stomach discomfort, redness of the face; man feels himself changed or the world around us. An attack usually lasts 20-30 minutes, rarely more than an hour; provoking factors can be stuffy, heat a large concentration of people, subway trains stop in the tunnel. Panic attack is usually accompanied by intense feelings of concern for his physical condition. Although the disorder often develops in young, physically healthy people, doctors may be difficult to convince them that there is no life-threatening disease. 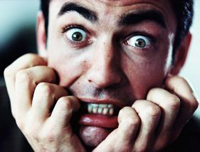 Panic reactions tend to repeatafter a certain time. And as a result there is, for example, so-called agoraphobia, that is a condition in which a person can not be in the closed, or - at least - open spaces. He stubbornly avoids places like tunnels, elevators, crowded shops; feels fear in closed vehicles, not only when moving, but when comes already in them. The disorder sometimes develops to the point when the patient refuses to leave the house.

People with phobic disorders are always criticalagainst their fears, they realize that they have experienced feelings of inadequacy, feel ashamed of his "weakness", provoking the development of additional complex. On the one hand, people avoid unpleasant situations, provoking disorder, on the other - is trying to deal with their fears, but, as a rule, independent attempts failed.

Social phobia - fear of humiliation orembarrassment in public places - different from agoraphobia, in which the person is less concerned about other people's reactions to his behavior. In the same social phobia is social evaluation - often imaginary - is the basis of phobic experiences. Sustained fear of humiliation in the eyes of others leads to the inability of public speaking, fear of choking while eating together, does not deal with urinating in a public toilet, not able to talk, and so on. N.

In the so-called simple phobias people afraidsomething specific: spiders, mice, storms, heights, darkness, blood, death. Because of objectivity and certainty of simple phobias resolution often much easier to find. For example, for urban residents is not so important is the fear of horses.

Experts identify several groups. This heredity and physiology features (often phobic disorders occur in people suffering from vascular dystonia), and especially the psychological structure, in accordance with which an individual can not adequately cope with the realities of human existence in general and the particular society in particular - for example, a series of explosions in public transport in connection with the events in Chechnya has created extremely favorable conditions for rapid "heyday" of phobias Muscovites.

What do you do man, found himselfsymptoms of phobic disorder? We should not think that if you already own a few years struggling with their fears without any success, then you have no one able to help. This is categorically not true! There are doctors who, using both medication and psychotherapy techniques achieve significant improvements.

As a general rule, medication combined with psychotherapy; recently doctors successfully used psychotherapy and as the only method of treatment.

Treatment should not be afraid - it will help you not to be afraid of life.