Infection and distribution of trichomaniasis

Trichomoniasis is one of the most common diseases transmitted by sexual. The cause of trichomoniasis is the simplest unicellular organisms of the harness class - vaginal trichomonas. How do they behave in the human body?

As the infection occurs

Outside the human body, trichomonas are quickly losing vitality. Mandatory condition for the existence of this pathogen is the presence of moisture - when dried, he quickly dies. Trichomonas are low-resistant to high temperatures (more than 40 °C), direct solar rays and exposure to disinfectants.

Distribution of the disease 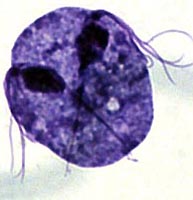 The transmission of infection and in the baths, where the simplest is exposed to high temperature, soap and water.

It should be noted the presence of a well-established system of protection against human immunity in the vaginal trichomonade.

In addition, trichomonas have a powerful set of non-enzymes (enzymes), which they allocate to the environment for their own protection, for example, to destroy antibodies. It is necessary to add that trichomonas can create an artificial shell around themselves, due to the ability to keep the plasma plasma protein on their surface, as if concealing from protective factors of the immune system. This does not give the immune system of the host organism! Recognize pathogen.

The place of introduction Trichomonas in women is the mucous membrane of the vagina, so trichomoniasis is manifested in the form of color. Colpit is an inflammatory process that affects the entire mucous membrane of the vagina. Then the pathogen on the surface of the mucous membranes gradually penetrates the urethra (urethra) and the cervix, causing already inflammatory transcc in these and other organs. The cervical channel is a kind of border of the distribution of urogenital trichomonade up, due to the constant compression of circular muscles and sharply alkaline reaction of the secrelable secret. However, this protective barrier loses its strength during menstruation, abortion and childbirth. In addition, during intercourse, rhythmic cuts in the uterus occur, which contribute to the suction of urogenital trichomonades in the cervix, in its cavity. When trichomonade penetration in the uterine pipes, trichomonadal salpingitis arises (from Greek. Salpinx - Pipe). As a rule, the defeat of the pipes is accompanied by inflammation of the ovaries. Urogenital trichomonades penetrate the ovary through the wound surface of the bunting follicle.

From the moment of infection to external manifestations of the disease usually passes from 3 to 30 days (this period of the disease is called incubation). Unfortunately, urogenital trichomoniasis has no specific (characteristic only for this annexation).

Trichomonas cause the development of urethritis inflammation (inflammation of the urethra) in men and vulvovaginitis (inflammation of the vagina and external genital organs) or urethritis in Wantsn. As a rule, the process initially has an acute form, then, after 2 months, the inflammatory response pohes and trichomoniasis goes into a chronic form or trichomonasiasis. Although trichomoniasis amazes men and women with the same frequency, the disease is much more often worried about women.

In trichomoniasis, the defeat of various organs and systems is characterized, so it is considered a multi-grade disease. Urogenital trichomonas contribute to the formation of ulcers and erosions on the mucous membrane of the urinary tract, since in reproduction they are separated into an external enzyme (hyaluronidase), which destroys the hyaluronic acid - the main fastener of the connective tissue. This, in turn, leads to a significant breaking of tissues and more free penetration into the intercellular space of toxic substances - products of the life of bacteria and the accompanying microbial flora. As a result, an inflammatory process is developing, which­Elementary tissues are accompanied by excretion of exudate (transparent inflammatory fluid), having sent damaged epithelial cells. Small hemorrhages may arise. Cells of dead and live pathogens are accumulated in the exudate, which can be identified with a laboratory survey.

In men, the manifestation of trichomoniasis is very similar to Honoric Ureretr, only all the symptoms are weaker than. Only 10-12% of the patients, it proceeds sharply with abundant purulent discharges and drains when urinating. Most sick men have signs of inflammation erased: the patient can not know for a long time about its illness and being a source of infection. In a chronic trichomonaceous urethritis, a number of men periodically appear itching and tingling in the urethra.

Eating alcoholic beverages, large amounts of beer, severe physical work, sexual excitement contribute to the emergence of complications, the most formidable of which are prostatitis and trichomonademic epididimitis. It is the development of these complications that is often the cause of infertility in men. In the absence of treatment, trichomonade urethritis in men can last for years with periodic exacerbations.

In women, trichomoniasis proceeds more acute. Most often affected vagina (trichomonade vaginitis), yellow liquid foamy discharge appear, often with an unpleasant smell that irritate the skin of the external genital organs, the crotch and inner surface of the hips, causing burning and itching. With the defeat of the urethra channel in patients, there is a massive and burning in urination. Patients become irritable, conflict, suffer from insomnia. In many cases, sexual intercourse begins to hurt. If the inflammatory process goes into the bladder neck, frequent urges are added to urination and soreness at the end of it. However, gradually, even in the absence of treatment, the intensity of inflammation is reduced, and the process takes a chronic course.

Chronic trichomonade urethritis usually proceeds asymptomatic. With the damage to trichomonas of large (bartoline) glands of the vagina exterior, the outer hole of the output duct closes, which leads to the accumulation of the inflammatory secret in the ferrous slices and the formation of cysts. In this case, iron increases in size, a small painful seal appears in the form of tumor-like education in the lower third of a large sexual lip. In the future, the contents of glands can be applied, which leads to the formation of purulent inflammation (abscess), which is manifested by a deterioration in general condition, an increase in body temperature to 38-39 °C and higher.

Symptoms of thrush in women. Treatment and ...

Diagnosis and treatment of Gardnerellize