Home›Gynecology›Bacterial Vaginosis: a problem with which each can meet

Bacterial Vaginosis: a problem with which each can meet

What is a modern woman? These are embodied beauty and charm, femininity and fragility, imbabitability and endurance. The reverse side of such a unique combination is a set consisting of chronic stress, reduced immunity and unstable mental state. Periods of full rest when a woman can fully relax and restore resources, rare and short.

Due to the susceptibility to constant stressing, a woman can develop a whole complex of diseases substantially poisoning and without that difficult life «weak» creatures. Mastopathy, thyroid disease, menstrual disorders — It is only the very beginning of the list of pathologies that can manifest itself from a modern representative of a beautiful sex.

Especially it should be noted infectious and inflammatory and dysbiotic diseases of the vagina, the symptoms of which are pathological discharges, in the spatrical of white.

It has long been known that such diseases as gonorrhea and trichomoniasis are caused by specific pathogens: gonorrhea — Gonokokkom, Trichomoniaz — vaginal trichomonade. Both infections are transmitted by sexual path and are not subject to our current attention. We want to talk about diseases whose owners can even become young girls who have not yet had sex contacts.

Among all urinary disorders there are diseases that rarely relate to the class of sexually transmission, since they are not associated with the penetration of the vagina of a specific pathogenic microorganism. Classic example of such a disease — Bacterial Vaginosis (Gardnerellosis).

To date, scientists have no accurate explanation for the causes of the emergence and development of Gardnerellize. As a result of the lack of information, a constant search for suitable treatment is conducted, and the result, as a rule, becomes a relapse of the disease and repetition of the course of therapeutic measures. Attempts to recover occupy years for which a huge amount of money, time and strength is spent, and patients accumulates dissatisfaction with themselves, difficult-scale family conflicts, phobias and serious psyche disorders appear.

The main complaint of women suffering from bacterial vaginosis, — Abundant liquid blessed discharge from vagina having an unpleasant smell. Contributing to the gynecologist of patients bother itching, burning and painful sensations with sex contacts. Peak of unpleasant sensations falls on the first days after the end of menstruation.

The consequence of bacterial vaginosis often becomes cystitis, and erosive and dystrophic violations of the epithelium are formed on the vaginal part of the cervix — states regarded by medicine as precancerous.

The causes of the death of normal microflora can be both uncontrolled self-treatment with antibiotics, and indiscriminate sex contacts. The sexual path of transmission of infection is considered rare, although urologists, and cases of occurrence of chronic anaerobic prostatites in men as a result of sex contacts with bacterial vaginosis carriers. Basically, men sick garardnellosis complain of the winking skin irritation, whitic blooming and the presence of surface erosions on the penis head.

Unfortunately, the frequency of incidence of bacterial vaginosis in women is growing every year. According to statistics, each third woman suffers from this ailment. It is important to note that the disease, developing, like caries, once, is further aggravated and rarely passes independently.

Therapeutic measures to get rid of bacterial vaginosis should include not only antibacterial and symptomatic agents, but also microbial transplantation preparations, restoring the metabolism of the entire vaginal microexystem.

Among the big spectrum of the preparations offered by the pharmaceutical industry are far from all capable of effectively restoring the acididophilic microflora of the vagina. 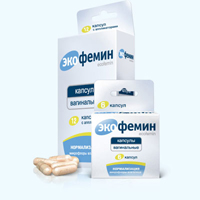 Currently, one of the most effective funds are vaginal capsules «EcoFememin». The drug refers to the category of symbiotics, since in addition to the Lactobacillus Acidophilus dispute contains a nutrient medium for their nutrition and reproduction — lactose. Lactose does not contain preservatives, antibiotics and hormones and is the optimal substrate used by milk acid bacteria for energy and plastic purposes.

Lactobacillus Acidophilus disputes are located inside the gelatin vaginal capsule size of 20 mm, which is completely, quickly and without a trace to dissolve into the vagina, without delivering a woman not the slightest discomfort. The manufacturer guarantees playback 108–109 lactic acid bacteria, which corresponds to their normal number in the vagina Absolutely healthy woman. It is important that these microorganisms belong to strains capable of producing hydrogen peroxide peroxide Lactobacillus Acidophilus.

The main effect of the drug is aimed at restoring and maintaining the natural bacterial vaginal microflora.

Indications for use are:

The use method is simple: just put the capsule deep into the vagina. To optimize the procedure, the kit may include special disposable applicators.

Preventive course of treatment — just one capsule per day for 6 days.

If the drug is appointed for medicinal purposes, then two capsules are usually prescribed per day for 6–12 days depending on the severity of the disease.

It is important to remember that in the composition of the intestinal microflora of women, patients with bacterial vaginosis, is often not all right. For this reason, the correction of the vaginal microflora is advisable to combine with the reception of the complex «ECOFEMIN-BALANCE», which provides normalization of a microflora of a large intestine. The course of treatment is from 2 weeks to 1 month.

Do not forget that the good mood depends on your wellness!