What is liver cancer

Liver cancer can be primary, that is, emanating from cells of hepatic structures, and secondary - growth in the liver of secondary metastatic tumor nodes from cancer cells listed in the liver from other internal organs with their primary tumor lesion. Metastatic liver tumors register 20 times more often than primary. The liver is one of the most frequently affected by the body by metastases, which is associated with its function in the body and the corresponding nature of blood supply. In general, more than a third of the tumors of the most different localization strikes the liver hematogenic way.

Primary liver cancer is a relatively rare disease, which is, according to various statistics, from 0.2 to 3% of all cases of cancer. Among the patients are predominant male faces; The most amazed is age from 50 to 65 years. In men, 90%, and in women only 40% of primary liver tumors malignant. In some regions of South Africa and Asia, hepatoma make up 50% of all carcin.

The development of liver cancer contributes to chronic viral hepatitis B (80% of patients with hepatoma). The risk of a sepiecotic cancer in a virus carrier increases 200 times (men carriers are higher than that of women).

Cirrhosis of the liver (especially the large form) is detected by about 60-90% of patients with hepatoma.

The development of liver cancer contributes to hemochromatosis (excessive content in the organism of iron), chronic diseases: hepatitis, bile disease, parasitic diseases (opistorhoz, schistosomomosis and others), as well as syphilis and alcoholism.

The cellular structure of metastatic liver tumors corresponds to the structure of the primary tumor of that organ from which this metastasis is listed.

A few weeks later, there is an increase in the liver (88% of cases), it can acquire a rustic density, and bugness. During the liver area, a painful tumor education may be detected (50% of cases). Gradually increases jaundice, signs of liver failure (60% of cases). 10-15% of patients occur intraperous bleeding and develops shock. Endocrinological disorders (for example, Cushing syndrome) are possible as a consequence of secretion with tumor cells of hormone-like substances.

Initially, the diagnosis is suggested on the basis of complaints and inspection of the patient, palpation and percussion of the liver, laboratory studies (raising bilirubin in blood and urobilin in the urine). 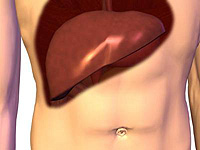 Recently, great importance in the diagnosis of tumor liver damage has ultrasound liver scans (ultrasound). With its wide availability, it allows you to study the liver structures in detail, with a high degree of reliability to identify nodal formations in it, differentiate their benign and malignant character. Under the control of ultrasound scanning, aiming percutaneous liver puncture is possible, which allows to obtain an accurate morphological diagnosis and distinguish liver cancer from some diseases similar in symptoms.

Laparacopical research allows you to carry out an outer inspection of the liver and if there are changes on its surface, make a fence material on histological examination.

The content of fetoproteins in the blood with a liver cancer increased in 70-90% of cases. This study can be successfully applied to the early diagnosis of disease to patients from the risk group.

Additional data can be obtained with radioisotope liver scanning, as well as by a contrasting study by hepatography.

The radical treatment of liver cancer represents a unresolved task, and only with isolated nodes of a small size, it is possible to perform their surgical removal (liver resection). Operational treatment necessarily includes a tumor biopsy. Install the nerve of the tumor is possible only after the execution of laparotomy (abdominal opening). However, such observations are rare, as a rule, patients with liver cancer belong to the category of incurable and subject to symptomatic treatment.

Chemotherapeutic drugs introduced intravenously practically do not effect. The introduction of drugs into the liver artery gives the best results.

With a metastatic lesion of the liver with cancers of other internal organs, patients most often belong to the IV clinical group and are subject to symptomatic treatment. Treatment methods and forecast depend on the nature of the primary tumor.

Since the development of liver cancer contributes to chronic viral hepatitis B and virusism, some parasitic diseases, carcinogenic effects on the liver of industrial poisons, the primary prevention is based on the prevention of these diseases and environmental protection.

Secondary prophylaxis is the early detection and timely treatment of chronic liver diseases.

Of particular importance is the fight against alcoholism, since the cirrhosis of the liver (especially the large-sized form) is detected by about 60-90% of patients with hepatoma.