Home›Pediatrics›Autism: to recognize and come to the rescue

Autism: to recognize and come to the rescue

Sometimes parents of autistic children do not notice the child in development. Awareness comes suddenly when the doctor reports that the baby, who still considered healthy, in fact, insecable. But to correct the development of an autistic child need as early as possible!

Spectators who have seen film «Rain Man», can remember the brilliant acting work of Dustina Hoffman. In it, he managed to finely embody and give us a picture of the inner world of a typical autista. In life, the feature of autism in a child may not be so pronounced. Scientists L. Kanner and G. Asperger described three major symptoms of the disease:


They are unpleasant affection mom 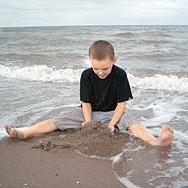 According to the specialist in the study of the anomalies of mental development in. Lebedinsky, autism manifests itself in reducing contacts with others – with peers or even with the most close people, including parents, - «Care in yourself», in its inner world.

From early age «Rain children» Do not be happy to rejoice in the warm touches of the mother, to answer a smile and revival to her approach. Usually in the infancy of most children there are congenital reflex – The pose of fit when they are trying to scatter on the body of the mother, clinging to her with all their calf. Children's autists have no reflex. Maternal caresses are unpleasant to them, the child will keep track of all bodily contact.

Even being in the children's team, an autistic child behaves as if he is alone – Looks past, does not go to call, does not pay attention to the actions and games of other children. He plays one or near children, often talking to himself, and more often silent.

All his games and emotional manifestations are extremely stingy, and in some cases limited to the poor set of stereotypical movements and facial expressions.

The child carefully hides his inner world from others, never tells anything, not sharing his experiences and doubts, does not answer questions. Only by some kind of indirect signs close people may guesses that he is worried about something.

In games, autistors prefer inanimate objects for animate. They do not know how to navigate in the signs of living and non-living and practically do not play plot games, so favorites by ordinary children, – in «Mother's daughters», «shop» or «Cossacks-robbers».

If a healthy child prefers toys that give the opportunity to produce complex scene actions, such as machines, dolls, then autistic children prefer non-specialized: cubes, papers, sticks and non-chamber items. Often they love to play with unformed objects – Sand, water.

In the drawings, they are absolutely not interested in the choice of color – They take the first pencil, while healthy children diligently pick up colors: Which color to draw the sky, how – Sun. Moreover, ordinary colors can be unpleasant for them, annoying. Colors of walls, wallpaper, furniture, toys, normal and pleasant for a healthy child, for autistic can be a source of discomfort and constant negative emotions. Figures of such children often do not have the plot: they do not have human figures or a sun with a house, but pictures or geometric shapes are depicted.

External emotional coldness and indifference to the closest people are always combined with increased vulnerability and even gugness. Autistic children painfully react to loud or unfamiliar sounds, objects or people.

And the strongest stimulus for them is a human look. That is why the autists never look at a person (and no matter how, «Edge Eyes»), despite the fact that this person can be his own mother. Due to the fact that an autistic child does not look at the face and in the eyes of other people, his «Looking at» someone else's face resembles the actions of the blind – The same feeling and examination by hand without any visual control.

The world around the autistic child is not a source of joy and the purpose of the study, but the source of permanent fears that children themselves never complain. Causes of diverse fears – Household Things, Some Toys, Sounds of the Operating Motor, Water Sounds, or Flap inlet Door.

The feeling of fear causes everything new, unfamiliar, so any, even the slightest change in the environment – Moving furniture, the appearance of new people, changing the usual dishes in the daily diet or the slightest deviations from the day mode can cause the most stormy reaction, panic. The child begins to fight in hysterics, shout, beat himself on the head. Some of them are painfully reacting to the easiest stimuli – Bright light and loud sounds, and others – On the contrary, they do not react so much that they are mistaken for blind or deaf.

Correcting children's soul feelings of anxiety and fear accompany them constantly, depriving the opportunity to rejoice in any manifestations of life. Constant «Readiness for flight», Pose of insertion, look to the side… Ritual behavior of autists – nothing but a protective reaction. In the future, the fear has inhibited influence on areas such as communication and training.


Intellect they are not offended

Training and social adaptation – The biggest problems of autistic children. Violation of social communication imposes an imprint on the whole course of the psychic development of the child. The sides of the perception that develop under the influence of subjective practice are especially affected:. Each of these functions is developing insulated, by itself. How to teach a child to read if it is impossible to make looking at the scroll?

Children playing in the same game for years, commit the same actions, for example, include and turn off light or water. But at the same time, the intelligence often remains saved. Sometimes it seems that the child does not notice the events taking place next to him, and it can be one phrase to discover an accurate understanding of some situation.

How are the fate of «Rain children»? As long as they are small, parents lead them according to doctors and psychologists, try to treat in traditional ways. If there is no effect from them, resort to alternative methods. This, for example, treatment with horses – Hipotherapy or rehabilitation with dolphins.

By the way, the author of this article is noted that children with a diagnosis of autism behave with dolphins peculiar. If, without exception, healthy children stroke them, talking to them by hanging their affectionate nicknames, then some small autists at first do not look at these charming marine mammals or relate to them negatively. But the therapeutic effect is still manifested – Children become calmer, friendly and start to watch on dolphin! The importance of this event can only be assessed by specialists or parents of kids.

Of course, the forecast depends on many factors: on the degree of expression of pathology, from relations in the family, from the choice of treatment and rehabilitation methods. But parental love and competent medical care helps «Children rain» take small victories over unexplored and fully understood.