Bronchitis from your child

Bronchitis - common disease in children. And it is easier to warn it than to treat. Physiotics, vitamins, hot tea with raspberries will help your child not only quickly get rid of this ailment, but also improve immunity. 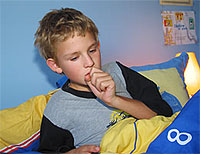 Bronchitis — This is inflammation of bronchi with a predominant defeat of their mucous. Distinguish acute and chronic bronchitis. In children, as a rule, acute bronchitis is developing, most often it is one of the manifestations of respiratory infections (ORZ, flu, adenoviral infection, etc.), sometimes — Before starting measles and cough.

Acute bronchitis occurs primarily in children with adenoids and chronic tonsillitis — inflammation of almonds; occurs more often in spring and autumn. Rubber appears, then cough. Temperature of the body is slightly elevated or normal. After 1-2 days, the sputum begins to stand out. Young children are usually a sputum, but swallow. Cough is especially worried about the child at night.

It is advisable to lay a child in bed, drink tea with raspberries and lime flowers, at a body temperature above 37.9°C prescribed antipsychotics, if suspected infectious complications according to the testimony — Antibiotics, sulfonamides. For wet wet, warm alkaline drinks are used (hot milk with butter and small amount of drinking soda), in T.C. Alkaline mineral waters (borzhomi, jermuk), inhalation with soda solution, brawl potatoes.

In the treatment of bronchitis put banks, mustard pieces, make hot wraps for the night: a small amount of vegetable oil is heated to a temperature of approximately 40-45°C, impregnate them gauze, which wrap around the body, trying to leave the free plot to the left of the sternum in the area of ​​the nipple location — In this place is the heart, on top of gauze apply compress paper or cellophane, then cotton; top cover with bandage, put on a wool shirt.

Usually, with the correct setting of the compression, the heat is saved all night. Banks, mustard pieces and wraps apply only if the body temperature is normal. With increasing it, these procedures are excluded, t.To. They contribute to further rise in temperature with a corresponding deterioration.

The forecast is favorable, however, in children suffering from rickets, exudative-catarrhal diathesis — The disease can proceed for a long time due to the impairment of bronchial patency, followed by the development of lung pneumonia.

Chronic bronchitis in children meets less often, it occurs against the background of the nasopharynx diseases, the cardiovascular system (congestion in the lungs), fibrosis (hereditary disease, in which the secretion of glands increases, in particular, bronchial). Contribute to the occurrence of the disease also exudative-catarial diathesis, congenital immunodeficiency states, violation of the function of the bronchi, some malformations of the lungs. Chronic bronchitis can leak without impairment of bronchi. In this case, there is a cough, dry and wet wheezing.

The main treatment is aimed at improving the resistance of the body. To this end, detects and sanitate chronic infections (caries teeth, adenoids, tonsillitis, otitis, etc.). In the diet of the child, more vegetables and fruits should be included, with immunodeficiency states increase immunity with pentoxyl, dibazole, decaris, vitaminotherapy. When aggravating the appointment of a doctor, antibiotics, sulfonamides, suprastin, diphedroll. Appoint UHF therapy, other physiotherapeutic procedures.