Home›Pediatrics›The child fell ill with windmill. What to do?

The child fell ill with windmill. What to do?

The child came from the kindergarten sluggish, not as mobile, as usual, the temperature rises right in front of the eyes, here is already 38.5C, a rash appeared on the skin and mucous membranes, and the increasing itching with windmill usually complements the picture. There are no doubts - these are signs of windmills in children, one of the most common children's diseases. How to treat it that doctors recommend - let's talk about it today. 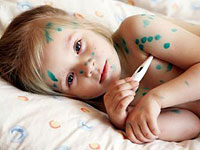 Rarely there is a kid attending a children's team and not overgrown with this common disease. By 10 years, many kids have already met with a virus living in external environment. Signs of chickenpox in children begin to manifest themselves with the occurrence of a characteristic rash — Small pink specks on the face, on the head under the hair, on hand and legs, on the back and abdomen. On the spot of spotted pink rash very soon, small transparent bubbles begin to form, but also their century, they are blamed and light brown crusts appear instead. It happens that red specks can be seen in a small area of ​​the skin, and transparent bubbles in a pink haloe, and dried crusts that do not leave any traces on the skin if care and the mode corresponded to the severity of the disease and the child did not combing these rashes, characterized by windmill itching, and very exhausting.

Infection is possible with direct contact with kids who still can also be seen any external signs of the windmill, but the virus, however, settled on the mucous membranes. In this case, this volatile pathogen will get to everyone who was nearby, even sometimes at some distance. Infectness happens through the upper respiratory tract and at the same time not necessarily kissing, hugging, sneeze and cough right in the face. The child's body is very susceptible and the virus easily settles on the mucous membranes. The incubation period usually lasts up to 14 days, although it happens that signs of acute windmill in children appear and later, after 21 days. 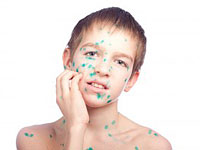 Children tolerate the disease is quite easy. Almost never requires bed and specific treatment, but what should pay attention to and help the baby, so it can cope with the chickenpox. Bubbles burst, get dry and, in the end, will pass without a trace, if they are not combed. In no case, this serious problem cannot be allowed to be allowed to allow the baby to comb the skin, you need to watch it very carefully, be sure to short to the nails to the child, look at the hand. Very small patients can be recommended cotton mittens. Bubbles need to be lubricated with 1% diamond (green) or a weakly concentrated manganese-sour cable (manganese) so that they soon dried. In a word, it is important to show all my parental art here, to persuade and help, play and distract and recover will not wait to wait, everything will pass without a trace. When maximum «bloom» Windmill, Komarovsky, Popular pediatrician from Kiev, considers the greenstone with a magnificent healing agent. How to treat a windmill, Komarovsky is very clear and available tells in a popular video film.

How to treat chickenpox in children 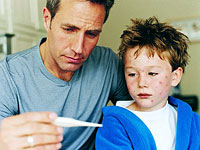 Here at the forefronts home care and regime, since treatment most often spend at home if any complications do not occur. In weakened children, in addition to the main manifestations of the disease, lymphadenitis, otitis, stomatitis and even inflammation of the lungs may occur. When a child's disease is detected, it is necessary to insulate immediately. All this time should actively lubricate skin rashes with green. One of the important tasks at the moment you begin to treat a windmill in children, Komarovsky sees in to closely monitor the number of new plugs. This makes it possible to determine the stage and the degree of the disease, see the appearance of the last pink specks. The windmill, according to Komarovsky, allocate 2 degrees of the course of the disease: average — The amount of rashes about 250, and heavy with the number of rashes about 1000. How to treat chickenpox in children The doctor tells the available and with a certain proportion of humor, giving it to understand that there is nothing difficult and heavy, only careful care, a mode and light milk-vegetable diet, a lot of berry decoctions, juices and water. It goes without saying, we are talking about the necessary sanitary and hygienic mode and caring, frequent change of bed and underwear, while the doctor does not exclude cool baths, which will help to remove and reduce the exhausting itch.