Home›Pediatrics›Vaccinations: When and why you need to do them?

Vaccinations: When and why you need to do them?

Make or not making vaccinate? That is the question for parents of children who go to kindergarten or school. Doctors say that vaccination is really necessary, because it is the most effective prophylactic measure in the season of colds and influenza.


The first vaccine in the world appeared more than two hundred years ago. Created her English doctor e. Jenner. The vaccination developed by them protected from such a terrible infectious disease, such as the OSP, who carried out during the epidemics of the life of hundreds of thousands of people on all continents of the Earth.

Today there is a large list of vaccinations that are recommended to be done according to the scheduled vaccination calendar, and those that are included 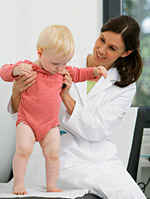 In the calendar of preventive vaccinations on epidemic indicators. Such vaccination is carried out if necessary, let's say, in the threat of an epidemic or a trip to the country, where there is a chance to pick one or another dangerous.

In the fall and winter the most common problem in children's institutions becomes influenza. The most effective preventive measure that gives 70-90% warranty, are vaccinations. They can be made by kids since six months, as well as children of preschool and school age. If after vaccination the disease still comes, it proceeds in a light form, and most importantly — does not lead to complications that distinguish influenza from ORZ.

By the way, the probability of infection with the latter in the graft guys is also reduced. True, before making any vaccination, including the influenza, the child should examine the doctor who will appreciate the condition of the baby and measure the temperature. If your Chad has a sharp disease or aggravation of chronic, vaccination must be postponed 2-4 weeks after recovery. With nonsense ARVI, acute intestinal vaccination diseases are carried out immediately after temperature normalization.

Many parents are concerned about the question: how harmless vaccinations? It has been established that modern domestic and imported vaccines (both alive and inactivated, that is, prepared from the dead viruses) practically do not cause strong adverse reactions. Only weak, expressed in a slight increase in temperature and small pain in the injection site.

And these phenomena are short-lived and cannot serve as a basis for refusing prophylactic immunization. To avoid health problems, before your child will be vaccinated, get acquainted with the instructions for the vaccine, with contraindications and check the shelf life of the drug.

By the way, today you can conduct vaccination against a number of acutely prone diseases and thereby largely prevent infection. In this, in fact, it is the meaning of prophylactic immunization carried out in all countries.

Since 2002, in Russia there is a new prophylactic vaccination calendar approved at the state level. Now it includes vaccinations against rubella and hepatitis B who have long been held in other countries.

It has been proven that rubella — One of the reasons for congenital deformities. Therefore, the teenage girls who did not feel first of all in need of vaccination, it will allow them to have healthy children in the future.

The vaccination against viral hepatitis B is very important, the incidence in Russia, unfortunately, is growing. It used to be believed that this infection is transmitted only with blood, let's say when overflowing. But thanks to the ubiquitous introduction of disposable syringes and needles, reinforced control over the quality of blood drugs, the frequency of infections of this dangerous ailment during medical procedures has decreased dramatically. Now hepatitis is most often transmitted during sexual contacts, and in adolescents, addicted to drugs, when introduced using a common syringe.

Acute hepatitis in can proceed very hard and often leads to a fatal outcome. The transition to a chronic form, fraught with the development of cirrhosis and liver cancer, is observed in 5-10% of adolescents and in 70-90% of those infected with the newborn and children of the first year of life. It is no coincidence that therefore in the calendar of preventive vaccinations is provided for vaccination for children of different 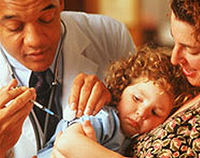 In accordance with the calendar in the first year of life, the child is immunized against tuberculosis (BCG vaccine), three times are injected through the mouth of a vaccine against poliomyelitis and three times — ACDS complex drug, causing the formation of immunity against cough, diphtheria and tetanus.

By the way, the advantage of such multicomponent vaccines, when a child instead of several injections make only one, obviously. True, many parents are especially fear of ADCs, since it is more often for the other — Increased temperature for 1-2 days.

In 1996-2000, the increase in incidence of epidemic vapotitis was registered in Russia. Improving the situation allowed urgent measures to conduct re-vaccination as a planned (children of 6 years) and for epidemiological indications (in the foci of emergence) to all adolescents.

Perennial experience in using a domestic living vibrant vaccine showed its high efficiency and safety. In addition, in 2001, Russian scientists have developed a so-called divacium against vapotitis and measles.

The widespread introduction of it in practice along with the use of previously existing drugs will be more successful to fight these infections and, in particular, to solve the task set by the World Health Organization (WHO) to Russian doctrines: to reduce the incidence of epidemic vapotite by 2010 to the level of 1 of the case per 100 thousands of population and measles — up to 143-147 cases on the entire population of the country, that is, to practically eliminate this infection.

By the way, Corge, epidemic vapotitis and rubella belong to children's air-drip infections, the main means of combating whom Vaccinoprophilax. The system of its organization in our country is recognized by WHO one of the most effective.

Adults — Revaccination against diphtheria, tetanus every 10 years from the moment of last revaccination.

Attention! In accordance with Article 5 of the Federal Law of September 17, 1998. NO 157-FZ «On the immunoprophylaxis of infectious diseases» Citizens are eligible for the refusal of vaccination. His reluctance to make preventive vaccinations must be confirmed in writing.

Opinion of a specialist

— It has been proven that in a kindergarten or school of any infection, an unmet child is exposed to the greatest risk. His disease occurs hard and, as a rule, is accompanied by complications. Therefore, Immunization is so important. It is no secret that vaccines sometimes cause adverse reactions. Some children at the place of vaccinations appear red, itching or soreness, sometimes the temperature rises. All this quickly passes, so parents should not be fear of vaccination. Another thing — Contraindications.

These, for example, include acute diseases or aggravation of the chronic process, allergic to egg protein with the introduction of measles vaccines, steam, rubella and some others. In a word, if a child has any serious contraindications, the doctor cancels vaccinations or directs the patient to the center of the immunoprophylaxis in order to conduct additional research and solving the issue of vaccination.