How does polio disease occur? What are the symptoms and diagnostics? When to vaccinate a child from polio?

Poliomyelitis is predominantly children's acute infectious disease with frequent damage to the nervous system. Word «polio» Comes from a combination of two Latin terms and means preferential damage to the gray matter of the spinal cord (the very thing that the figure is reminded by its outlines «Butterfly»). Today, the incidence of children with polio is registered throughout, however, as a result of the active use of primary vaccinations, it is reduced to isolated cases.

The culprit of one of the most terrible infectious diseases of children's age is small and to the ridiculous simply arranged enterovirus family «Picornaviride» - close relative «Meningitis intestinal orphans» and hepatitis A causative agent. A dangerous lump of protein-nucleic nature with a diameter of some 20-30 nanometers, nevertheless, should pay tribute. The latter is extremely resistant in the environment (subject to sufficient moisture content) and finely transfers low temperatures. The sword enemies of the polyovirus can be recognized unless the ultraviolet radiation spectrum, drying and high temperatures (when boiling, the virus punishes is not absorbed instantly). 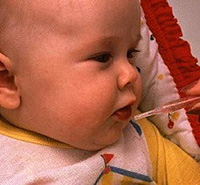 Infection of an unmet child occurs usually through dirty hands, toys, contaminated (infected) food, non-filled water, with close contact with children-viruses and patients with an erased flowing «under mask» Orz or lightweight intestinal infection, polyomelitis form. The most vulnerable are children of preschool age. Practically do not ill poliomyelitis only newborns and kids of two-three-month-old ages due to «residual» Circulation of obtained intrauterine mami virus viralism antibodies. The maximum activity of such protective proteins is observed only to the fifth week of life. Next, in order to preserve the health and immunity of the child to a dangerous disease, the introduction of a special vaccine is absolutely necessary.

Incubation period of polio (time from the moment of infection until the first symptoms of the disease) ranges from 5 to 35 days. All forms of infection are commonly divided into typical (with damage to the nervous system) and atypical (without such). In cases accompanied by the defeat of the central nervous system, it is customary to be separated by paralytic and non-parastic (meningeal form) poliomyelitis. The most frequent and complex for medical diagnostics are non-paralytic and atypical forms. Such manifestations of the disease often it is difficult to distinguish from banal ARS, intestinal and enterovirus infections (small disease, diarrhea, serous-viral meningitis). Only a combination of typical symptom complex «acute sluggish paralysis» and generalfeit syndrome (headache, baby concern, feeding, lethargy, drowsiness, sleep disruption, oppression or vice versa, increased excitability, high fever - up to 39 degrees and higher, sweating, pain in stomach and stool disorder) allows you to regard existing disease as poliomyelitis. Veliable paralysis (reduction of muscle tone, active movements and loss of tendon reflexes) arise suddenly, more often on the background of normal temperature and never accompanied by sensitivity disorders. The marked manifestations are primarily characterized by the most bright of paralytic forms of polio - spinal (the one that damages «Butterochkovoid» Gray spinal cord). In the practice of children's doctors, many other options for paralytic forms are often observed - Pontine (requiring a thorough differential diagnosis with facial neuritis), bulbar (the most severe and expressed resorts of breathing, swallowing and speech), encephalitic (accompanied by convulsions and loss of consciousness) and T.D.

One way or another, all children with suspicion of the development of any form of polio will necessarily enter specialized (bauxen) branches of infectious hospitals. The diagnosis is necessarily confirmed by the laboratory methods of the examination - the release of the virus from the biological fluids of the focallery of the child or the increase in the level of specific antibodies in the blood.

Specific disease therapy currently does not exist, therefore residual phenomena (may be insignificant or lead to a disability) depend on the localization and severity of the pathological process. In this regard, the decisive role in the fight against poliomyelitis in children is given by the methods of specific active immunoprophylaxis. Baby vaccination begins with a three-month-old living polyovakcinate of Sabin (some European solka vaccine is still used in the form of a dragee). Introduction of polyovaccine (instillation of four drops in the mouth) can be combined with DC and antihemophily vaccination.

As noted above, the need for babies vaccination from three-month age is dictated by a decrease in the tension of transplacentary immunity obtained in the intrauterine period of maternal blood. Often, the opponeling protection of the fetus and the newborn, until the fifth week of life, it turns out so strong that it would seem to prevent cases «One hundred percent» Diseases - despite the significant content of the virus in the placenta, the accumulative waters and the intestines obtained from the sick during the pregnancy of the mother. Unfortunately, this cannot be said about the child, starting from three months old - the kids are absolutely defenseless before the Terrible infection. Currently, the vaccine strain of the SEBINA is recognized as the safest and least reactive of all known. It is shown that rare (1 to 5-6 million. graft) «PostAscital complications», arising in response to the introduction of the drug in the overwhelming majority due to the layering of intercurrent (independent) acute diseases.