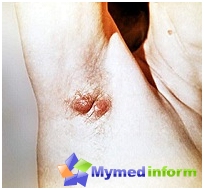 Acute purulent inflammation of the sweat glands (acute hydraenitis) is most often observed in the armpits, much less often - in the groin area, in the crotch and, very rarely, in the zone of the breast nipple area.

Sweet glands are located in subcutaneous tissue, directly under the skin. They have a long corkscrewly convocilateered output channel, which is easily blocked, prevents the outflow from the depth of the gland.

Increased sweating, uncleanness, features of working conditions (high dustiness, elevated temperature, humidity, work with lubricants), wearing rude unmensed overalls and other points. The overall condition of the body is important, in particular the weakening of severe diseases, violations of hormonal balance, diabetes and other metabolic disorders.

The disease begins with the appearance of a small, painful nodule in the subcutaneous tissue, which gradually increases, reaching sizes 2×3 or 3×5 cm. The skin first unchanged and even moving over the knot, acquires a reddish-cyanotic color, glitters, thinning, and about 3-4 weeks from the beginning of the disease (sometimes earlier, and sometimes later) there is a spontaneous opening of an ulcer, but it brings only temporary relief. The first purulent focus will not have time to eliminate, as two more or immediately two appears, and sometimes boils are developing at the same time in the same region. There is chronic recurrent hydradenitis, in the people called «bitch duc».

Spontaneous cure is very rare, the disease is delayed and prevents the implementation of a number of works.

Regardless of the stage of the disease, primarily perform a thorough toilet of the armpit.
Hair is coated with scissors and get drunk. The armpit is washed with warm water with soap, after which it is wiping with alcohol, alcohol solution of chlorhexidine and other alcohol solutions of antiseptics.

Treatment in the stage of infiltrate. Infiltrate is nothing but a focus of inflammation. The danger is that without treatment, infiltrate may be charged and demand surgery. In the stage of infiltrate use UHF therapy, radiotherapy, laser irradiation. At night impose a warming compress. Mase compresses, especially with the ointment of Vishnevsky or based on ichthyol, impose prohibit! With abundant sweating, the processing of the axillary depression should be produced 2-3 times a day, with a mandatory wash warm water with soap. The bandage is fixed with the help of bandage «Ratelast».

Treatment under the stage of an abscess (abscess is an derived accumulation of pus). In the abscess or appearance of purulent fistulas (fistula is a channel, through which the liquid content of the deeperial cavity is distinguished) the patient is subject to operations. Operational treatment is usually produced under general anesthesia under hospital. Therefore, these patients are subject to hospitalization in the surgical department.

After the operation at which all the affected sweat glands are trying or excised.

Treatment of chronic recurrent hydraenite - a very difficult task. As a rule, excision are produced (that is, the removal) of all sweat glands of the axillary region with a substitution (replacement) of the skin defect or local tissues, or its transplantation. Patient naturally goes to hospital.