Home>disease>The symptoms and treatment of psoriasis

The symptoms and treatment of psoriasis

disease
by admin
Psoriasis is a chronic Noninfectivehuman skin disease, which is also referred to as "psoriasis". In the literal translation from the Greek word meaning "itch" or "itch".

Opinions regarding modern medicinemixed origin of psoriasis. They are reduced to different judgments: a genetic predisposition to a mental injury as well as disruption of the endocrine system functions and metabolism. Currently, there is still a hypothesisthe impact of viral factors on the occurrence of the disease, but none of the versions is not considered to be recognized. It should be added that patients are observed not only skin changes, but also changes in the other systems, and internal organs. 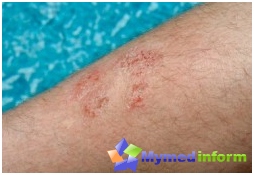 Psoriasis is one of the most complex anddermatoses common tending to increase both the incidence and an increase in the number of different forms of display. Determination of the diagnosis is made by visual skin research, in case of atypical lesions in the biopsy is appointed as an additional study. Numerous forms of this disease are divided into two main categories.

In addition, many authors identify these additional forms of the disease, such as: 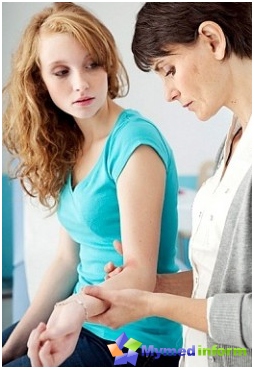 The process of occurrence of psoriasis typicallyIt begins acutely. It manifests itself in the form of small papules (knots) red-pink color, covered with peeling silvery-white scales. These formations are increasing quite rapidly, forming plaques. Combing papules first peeled the scales and then formed smooth shiny surface, which is very vulnerable to various poskablivanii, leading to the further emergence of blood droplets. Such education, depending on the specific form of the disease, can take quite extensive areas of the skin. Most often, these lesions occur on the knees, elbows and head, but it should be borne in mind that they can manifest themselves in different parts of the epidermis. At the same time the overall health of the patient and his state of health does not affect psoriasis.

A significant role in the pathogenesis of psoriasis playdisorders of the immune system. Clinically proven that skin lesions are accompanied by a significant influx of activated T-lymphocytes. Their excessive migration from peripheral blood in some areas of the skin can cause destruction of healthy epidermal cells sick. This process can be carried out by converting the cytoplasmic membrane, promotion of migration into the epidermis, and increase adhesion to endothelial cells. 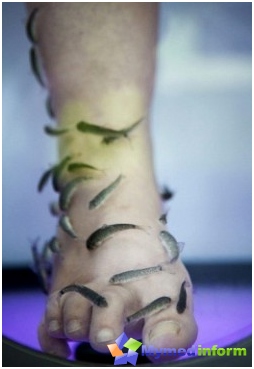 Psoriasis may have three clinical stages: progressive (the appearance of fresh nodules), stationary (stable growth of plaques) and regressing (the resolution of the disease is accompanied by the disappearance of the papules). It is believed that to get rid of this disease today is not possible, but there are a number of treatments for productive and effective drugs, allowing to control an outbreak of disease and significantly alleviate their symptoms.

Treatment of psoriasis is primarily directed tocessation of proliferation of epithelial cells and suppress the inflammatory process. For this purpose, depending on the form of the disease, its stage of development and prevalence is assigned an individual treatment, the age, sex and general health of the patient.

In the treatment of mild forms of the disease, it usually happensthe use of tar, salicylic or any other emollient ointment and naphthalan preparations is sufficient. Severe, advanced forms of psoriasis require complex treatment with the systematic use of anti-inflammatory, desensitizing and detoxifying drugs, as well as various methods of physiotherapy. One of the most effective treatments for psoriasis is currently considered photochemotherapy or PUVA therapy.

The treatment of any form of psoriasis typicallyaccompanied by the use of absorbable and peeling ointments, use of sedatives, paraffin treatment, ultraviolet radiation, hormone therapy, and the use of vitamins such as "A", "B1", "B2", "B12". In treatment of psoriasis patients should completely abandon the use of alcohol and regulate your diet as much as possible to reduce the use of acute and fatty foods. Restrictions are also subject to the products, which contain digestible carbohydrates: sugar, honey, jam, etc. A significant advantage of such a diet is a positive impact in the process of treatment of the proteins of various origins, both animal and vegetable...

Psoriasis can manifest itself through a ratherprolonged periods of time. It has a fluctuating course with periods of exacerbation and subsided. It is noticed that most of exacerbation of the disease occur in autumn and winter, and much less in the summer. In general, the prognosis for patients with psoriasis favorable, except for the psychological factor. In severe forms of the disease may be formed trudnoskhodyaschih scars. In psoriasis can have an unpredictable impact of pregnancy. During childbearing women should not use hormonal ointments and avoid systemic therapy. mymedinform.com recalls that, as in the treatment of any other disease, the most effective treatment for psoriasis is to prevent its occurrence. Therefore, people with a predisposition to this type of dermatosis, you should always keep this in mind.