medicine
by admin
In the summer a lot of our children are walking in the street,play together in the sandbox, eat all kinds of berries, fruits, pat the animals, bathe. Moreover, the rules of hygiene are observed by them is not always so increases the risk of infection by different parasites.

The emergence of pain in the stomach, worseningappetite, nausea, itching and discomfort at anus in children or in adults may indicate, in particular, and that have settled in their body worms (Scientifically - helminths). With many of these species of parasite manages to handle by a preparation called "Vermoxum". 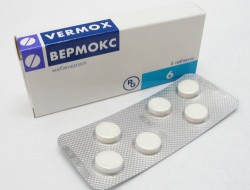 Produced in Hungary Vermoxum known firm"Gedeon Richter". The packaging is a blister containing six tablets. Tablets these flat, disk-like shape. In the middle of each tablet has a dimple on one side there is an inscription «VERMOX», and on the other there is a risk to help if necessary, divide the tablet into two halves. With the opening of the blister can be easy to feel the characteristic smell. The diameter of the tablets about ten millimeters. Active substance Vermoxum - mebendazole, each tablet in its 100 milligrams. In addition it contains and auxiliary components: colloidal silicon dioxide, sodium saccharinate, magnesium stearate, sodium lauryl sulphate, lactose monohydrate, talc, corn starch.

Vermoxum very effective in the treatment of enterobiosis. This parasitic disease, which culprits are small round worms white - pinworms. Most often it is detected when the patient's complaints of disorder of the intestine, and itching in the anus area. The drug is effective in some types of parasitic infection of the round and tapeworms. Once in the body, the active substance does not give mebendazole Vermoxum worms adsorb (suck) glucose, which is the main source of their power. Within two or three days worms are depleted and become extinct. All drug exhibits its activity directly in the intestine and the liver, bloodstream almost misses it. After completing its mission, the drug leaves the body along with the feces (90%), and the rest - in the urine. 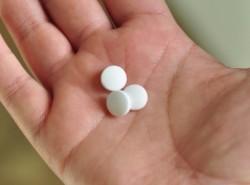 If a child is diagnosed with "Enterobiasis", the treatment regimen is as follows:

If other types of worms are ascertained, thetreatment scheme is as follows: twice a day, it is necessary to take one whole tablet for three days. Infants, whose age is less than two years, the dosage selects children's doctor.

The treatment is preferably carried out immediately to all members of the family, only then you will be confident that the parasite was able to win. During the treatment it is not necessary to overload the liver, oily and spicy food.

How to take Vermoxum adult? It all depends on the type of worms.

When enterobioze - 1 tablet once Repeat after 14 and 28 days.

In ascariasis, taeniasis, trichuriasis and mixed invasions - 1 tablet twice a day (usually in the morning and evening).

Such treatment must necessarily be carried out under medical supervision, with the control of the liver. 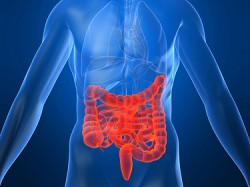 During treatment (especially high doses) are possible drug side effects such as:

There are diseases in which it is impossible to take Vermoxum:

Vermoxum contraindicated in pregnancy,lactation period, if you are allergic to substances that are part of this medicine. The appointment means that young children (up to two years) should be decided only pediatrician. 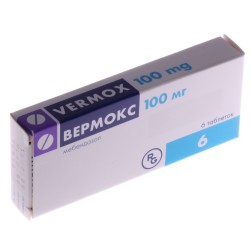 In the days of the treatment and the day after that you can not drink alcohol and too fatty food.

At the same time dekaris, cimetidine, the tool is not recommended, as it increases its toxic properties.

It is not necessary during treatment Vermoxum laxatives, it can cause long-term bowel disorder.

If the patient is assigned Vermoxum diabetes, Then at this time it is reduced to some extent the need for insulin.

If Vermoxum established a woman who breast-feeds the baby, then the period of treatment breastfeeding should be interrupted.