Gynecology
by admin
Why women are born several children,Science still has not learned. There is an assumption that it is a multiple pregnancy is transmitted through the maternal line. With the 80-ies of twins and triplets born has become a lot more due to the fact that there are treatments for infertility as IVF and stimulation of ovulation hormones. 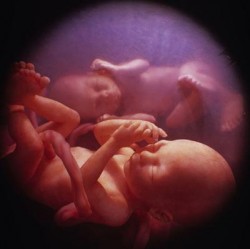 As they say multiple studies now exactly half of all multiple births occur after ECOBefore this procedure usually stimulateovary and from there several eggs. To reduce the risk of multiple pregnancy, doctors gradually reduce the number of embryos transferred into the woman's uterus. Now podsazhivayut often one or two embryos.

Twins are identical, or monozygotic, anddizygotic or fraternal. Twins are considered identical embryos, they have the same set of chromosomes and develop from a single egg, which is fertilized one sperm. Children are born very similar to each other, and they are always the same sex. In fraternal children set of chromosomes is a little different. They develop in the uterus simultaneously from two different eggs. They are called "twins" are similar to each other, may be heterosexual and have half of their genes. Fraternal twins can happen for the following reasons:

Identical twins have their origin in such a coincidence:

Triplets can be either identical, or fraternal, twins are two and one independent fruit. Quadruple can be two twins, triplets and one fruit. 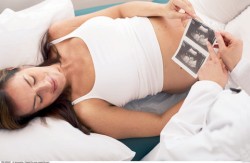 Define multiple pregnancy cangynecologist at the first examination. The fact that the original size of the uterus in the event there are more than one fruit. At the end of the first trimester, the difference becomes very noticeable. To confirm the diagnosis gynecologist sends the patient to the ultrasound. This usually occurs at 8 weeks. Sometimes it happens that the first ultrasound seen some fruit, and subsequently only one, if the second measurement. It happens, and vice versa, the fetus can hide behind the other, and then on the second ultrasound mom expects a "surprise".

In multiple pregnancies triple test,which are doing to identify malformations is not informative. All of the placenta produces a lot more substance than in singleton pregnancies.

Which indicates the presence of multiple pregnancy: 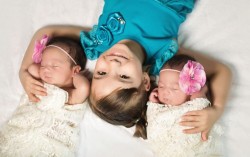 In multiple pregnancies the gynecologistThey come for a visit often. If all goes well, then the second trimester runs every 10 days for consultation. And in the third trimester - weekly. Special attention is directed not only on the test results, but also to moms weight gain for pregnancy should not exceed 15 kg.

If there are any abnormalities in the patient's state of health, the woman immediately hospitalized. In the normal course of pregnancy, a woman hospitalized for two weeks prior to the DA.

Keeping delivery depends on what positionThey are children and their expected weight. It is considered dangerous to carry out natural childbirth, if the first baby is in the breech position, because the children are hooked heads and then delivery is to be impossible.

To speed up the birth of her second child, he prematurely reveal the fetal bladder and injected drugs that cause contractions. If there is a risk to the mother or fetus, then spend cesarean section.

The birth in multiple pregnancies areahead of schedule. In light of these children mature earlier, so at birth, they can breathe on their own. After birth, feel worse identical twins than the twins, they often have trouble breathing, swelling and jaundice syndrome. The most favorable period for the passage of births to twins - 38 weeks, and for triplets - 36 weeks.

Deliveries begin with rupture of membranes or labor. They were held at epidural anesthesiaThat allows to pass from any pointnatural childbirth for surgery. giving birth often put a dropper, which is saline, so at any time begin to enter through her medication. The time between the birth of the first and second child is dependent on attempts, the more intense they are, the less time for delivery. Identical twins are usually born with an interval of 10 minutes, and fraternal may be born with a difference of an hour.

After birth mom with twins is the same in the hospital, and as a woman in labor with one child. If all goes well, then after a few days of many children happy kids hand dad.