Gynecology
by admin
Pregnancy for a woman is connected not only with happy waiting, but also with different fears and alarms. Especially when the body suddenly begins to work not as usual. Temperature during pregnancy - phenomenon is quite frequent, but is always a reason for concern. 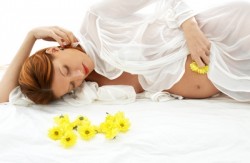 For women that measure basal temperature, it is no secret that throughout the menstrual cycle, the body temperature may vary. If before ovulation It is 36.6-36.8 ° C, before ovulation drops approximately 0.2 ° C to 36.4-36.6 ° C, then in the second phase of the menstrual cycle, it increases sharply and can be 37 ° C and above. And this is considered the norm, because every month produces progesterone - a hormone of pregnancy, it contributes to a slight increase in temperature.

The same applies to the first trimester of pregnancy. The body begins to actively develop progesterone, from which pregnancy pregnancy depends largely, which helps to increase body temperature to 37.2-37.4 ° C. Thus, if you are absolutely not bothering you, but at the same time the temperature has grown a little, then in the first weeks it can be considered an absolute norm. From the fourth month, progesterone decreases, because with an increase in temperature above 37 ° C, you should contact a doctor for the necessary surveys.

Pregnant women, especially in the first weeks, often feel the heat, but at the same time they are not in a hurry to take a medical thermometer, because they feel good enough. But it is recommended to listen to very carefully to your body, because sometimes the cause of temperature increases can serve as viral infections, intestinal sticks and diseases of the urogenital system. 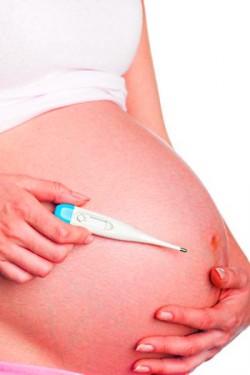 The future child acutely feeling everything that happens with mom. Various diseases of a pregnant woman can negatively affect the fruit, bring to many diseases and pathologies, and sometimes - to interrupt pregnancy. A particularly dangerous period of the doctors note the I and II trimesters of pregnancy, when the internal organs are only formed. The effect of high temperature on the development of the fetus in the III trimester is no longer so harmful, but still the risk of hypoxia and premature birth remains.

The temperature during pregnancy is considered particularly dangerous if it rises above 38.5 ° C and lasts a long time. If it is impossible to bring down the temperature longer than a day, then this state in one way or another can affect the development of the fetus. Doctors note that due to the diseases of the mother, the kid can get the following deviations:

What to do if the temperature rose?

We have already found out: it should be worried only after increasing the temperature above 38 ° C. What to do in such cases? First of all, consult a doctor. Sometimes it happens that there is no such possibility, then the future mom has three options:

All three options are good if you are sure that you are disturbing the usual cold, not signs of pyelonephritis. Or, for example, when poisoning Future mom shows hospitalization. That is why MPsovtsov recommends to resort to self-medication only in the most extreme cases. 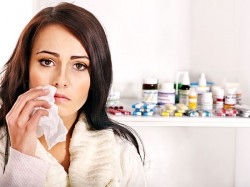 As you know, the future mothers appoint a tablet can exclusively specialist. But if you have risen the temperature above 38.5 ° C, you can try to knock it down with Paracetamola. But his admission is strictly limited 4 pills per day, and the break between the techniques should be at least 4 hours. But refer to this drug should be seriously, if you take paracetamol for a long time and uncontrollably, that is, the risk of development anemia and bleeding.

It is categorically impossible to shoot down the temperature of harmless, at first glance, aspirin. It has the property of blood wrestling and can provoke bleeding.

It is believed that candles of vibrations created on a vegetable basis are also able to bring down the temperature in the future mother. The use of these candles is permitted by doctors.

For a future mother, an ideal treatment option at home can be considered to receive 1 paracetamol tablets or 1 wambol candles, after which, if the condition has not improved, the urgent doctor. If the woman feels a sharp deterioration in state of health or the temperature rises too quickly, it is necessary to urgently cause «ambulance». 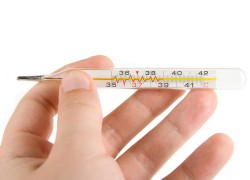 Pretty many women prefer to refer to traditional medicine, believing that recipes, proven decades, will not cause any harm. However, it is not. Often «Healing» Demissions may contain components that are categorically prohibited by doctors today. Therefore, before resorting to such a method of treatment, it is best to consult with the doctor.

If you have overcome a cold, it is quite possible to cure one exactly proven folk method: plenty of warm drink. Pregnant can drink lime color with honey, warm milk, tea with raspberries, both black and green, various herbal decoction. Such a fluid must be at least two liters per day. Lipa has a good stiff and antipyretic effect and it is quite possible to significantly reduce the temperature with its help.

It is also possible to try to knock down the temperature using conventional wipes. For this, a weak acetic solution or water is suitable in which lemon juice is added. In no case do not waste water with alcohol, as it absorbs through the skin.

If you summarize all the foregoing, you can accurately say that a short-term and slight increase in temperature (up to 1-1,50 ° C) for a pregnant woman is completely non-dangerous. But the condition when the temperature does not come down for a long time, while there is a significant deterioration in the health of the future mother, it is capable of harming their health, because they should immediately consult a doctor.