How to protect a child suffering from epilepsy

As a rule, family members and caregivers of children with epilepsy, are concerned about the possibility of obtaining a child injured as a result of attacks. How to avoid this danger?

The need for limitations

There are three main reasons to justifythe need to restrict the actions of children with epilepsy. Firstly, it is a very real risk of injury to a child during an attack due to the possible failure of falls, burns, cuts and abrasions, broken bones and teeth, sprains. Second, is the need to protect the child from the events and circumstances that may provoke his attacks. Such events include, for example, flicker and flash light (photic stimulation), sleep deprivation, alcohol intake, overheating. Finally, in exceptional cases, restrictions may be due to the fear of emotional damage, psychological trauma in the child.

For some children have to be limitations of a temporary nature, for example in the following situations:

Restrictions may be imposed for an indefinitelife for children with persistently recurrent (repeated), not susceptible to bouts of treatment. In children with progressive forms of epilepsy and conditions of administration actions of those or other restrictions should be revised with the passage of time.

Essential in the adoption of the bans and limitations of solutions given to the following factors:

The child's age. All children are allowed to do only whatappropriate to their age, temperament and level of mental development. For children under 8 years all restrictions should take the form of binding rules or prohibitions. At older ages, children are beginning to recognize the need and importance of the constraints, so you should seek their consent for the manifestation of a particular restraint in those situations, and at those times when the usual rules of conduct do not require it.

The frequency of attacks. Children with infrequent attacks usually do not needany restrictions. This is quite reasonable, if, for example, during the year there was only one attack. On the other hand, at very frequent absences (small seizures with loss of consciousness), spasms of various kinds, as well as in children with newly diagnosed epilepsy, it requires the introduction of appropriate restrictions to establish full control over the attacks.

Time and place of seizure. Some children have seizures occur only insleep time, that is, at the time when the baby is in a relatively safe and comfortable position. Other children also attacks occur in the active time of day and can be triggered by flashing light, glare TV screen or monitor.

These circumstances can be overcome eitherto some extent limit their exposure by using, for example, sunglasses, and closing one eye. In the rare cases when this kind of situation last long, they become a source of constant problems.

Child compliant. A very important factor is the ability ofthe child to comply with a series of conditions limiting its activities, and the ability to bear the permanent responsibility. Of particular importance, such self-organization becomes a teenager, as well as those families who can not afford to buy medicines regularly.

Concomitant diagnoses. The presence of comorbid diagnosis, such as physical or mental disabilities, can also be an obstacle to the introduction of restrictions. 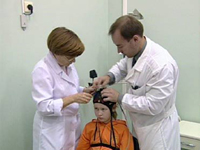 The following describes some of the restrictions applied to specific circumstances.

In home. Young children should never be left inbath unsupervised. For the older children is preferable to use the shower, but you should never lock the door to the bathroom. Loss of consciousness can lead to a fall in the water, and at the same time easy enough to choke.

People should also avoid sleeping surfaces(For example, a water mattress), bedspreads and pillows that can cause difficulty in breathing and, consequently, asphyxia. This is especially true of beds infants and young children. And, of course, necessary to exclude children stay near open flames, hot stoves and ovens, staircases.

Outside the family. Nurse, preschool teacherinstitution, a teacher at the school, as well as any other persons carrying on certain points responsible for the child must be informed of the probability of occurrence of seizures.

It is important to observe the childadults were thoroughly familiar with the basic information about epilepsy, associated problems, as well as the necessary precautions and rules of first aid. If possible, the appropriate age the child should attend secondary school. Relatives or doctor must inform the school nurses about the presence of seizures in a child and received in connection with the restrictions.

However, it should be allowed to take the childparticipation in all sports and public events held as part of the school. Regular physical activity and adherence to appropriate skills training would not in any way adversely affect the course of the disease and, moreover, exacerbate it.

In cases where there is a high riskstatus epilepticus (a very long attack or multiple attacks, one after the other) in a child, restrictions may be relaxed only under the condition that residing near adult educators in advance have been trained to manage the situation and the use of fast-acting anticonvulsants (eg, candles with diazepam) . If during the attack the child involuntary urination occurs, it would be wise to keep this case in the school extra clothes.

Generally, classmates better aware of the possibleattacks from their companion, especially if seizures occur or have expressed a generalized picture. Often it takes a long time, until the family becomes accustomed to the necessity of the disclosure of the child's diagnosis, but this forced measure required incentive condescending attitude.

Swimming, boating, surfing. All children involved in water sports,We need constant supervision of an experienced lifeguard. Swim best with friends. It is prudent to use a lifejacket. The main factors, which should pay attention - this is the child's age, seizure frequency, reliability and thoroughness of control over his actions.

Snorkeling and diving. These are of the few sports that should be avoided for children with epilepsy.

Accommodation in the campaign, and with friends. Adult, bearing in these situationsresponsible for children should be made aware about the form of seizures in children, and on the rules of first aid, and the means of family notification, if necessary, in the same way, as is customary in the school or in any other active and physical activities with their children.

Traveling by plane, as well as the journey through the areas with weak health services. As long as you have access to skilledmedical care, there is no need to suggest any limitation of children in travel. Close obliged to think about the trip in advance and provide those necessary measures that will inevitably be needed in the provision of first aid during the attack.

There may be, and such a situation where reasonableinterrupt the journey, or a matter of urgency to use high-speed anticonvulsants. The decision should be taken, based on an analytical comparison of the likely risks and undoubted benefit to the child.

Climbing rope, trees, rocks. Wildcats rises to the height necessary to prohibit. This applies not only to children with epilepsy. Such prohibitions dictated by common sense.

Running on the cross country skiing, long-distance running and other sports that require endurance. It is highly unlikely that the intensive trainingsports can have a negative impact on the attacks. A good test and proof of resistance attacks are known to be a preparatory and training sessions before the competition.

Biking, skating, rollerblading, skateboarding. Everyone, without exception, children, including children withepilepsy should be when riding on the listed sports equipment to avoid busy streets and squares. In addition, regardless of whether they have children when riding attacks are required to wear protective helmets, knee and elbow pads. If the seizures are not controlled or identified recently, the cycling, skating, rollerblading, and the board should be discontinued.

Football, rugby, handball, hockey (contact sports). Mild head injuries, possible when doing these sports - it is certainly an injury, but not serious enough to cause a seizure.

Restrictions on driving licenses,different in different countries. In some states, they do not exist, you just have your doctor's approval on the movement as a whole. In others, the presence of the diagnosis requires a history of the period of absence of the patient attacks lasting from 3 months to 1 year.

People with active epilepsy, sitting down forsteering wheel, it is necessary to warn about dangerous situations that may occur while operating a vehicle, and so caution should be made in writing.

Patients with resistant to medicationforms of attacks are to be generally barred from driving and the dangers of violation of this prohibition are informed, as well as the impossibility of paying the insurance as a result of what happened in this accident.

Although all the rules are different, but in that case,If the resumption of attacks occurred as a result of prescribed changes in the treatment, the patient should not be completely suspended from driving a vehicle, especially if it was assumed that a return to the previously taking the drug will restore the control of seizures.

Whatever it was, the complete discontinuation ofdrugs is a challenge for both doctor and patient driver. For some patients, the risk of renewed attacks the abolition of drug therapy is quite small, but if the attack still happens, then most likely it occurs in the first 3-6 months after withdrawal of treatment. During this period, do not get behind the wheel.

Specialized nutrition - assistance in restoring after ...