The whole truth about carbonated beverages

food Hygiene
by admin
We drink "soda", sometimes without thinking aboutthe harm they can do to our body. And this damage, however, is quite large, repeat what society for the protection of consumers' rights in many countries. So what is hidden from us manufacturers of carbonated beverages bright labels for advertising and propaganda? Let's investigate. 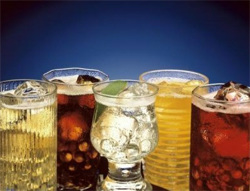 Sultry summer. This summer. We rejoice in the summer sun and go out into the street - towards the scorching rays. It is not surprising that in a country where half last winter, so happy summer. But even more glad hottest producers beloved old days "soda", because the heat awakens the thirst and craving impels us to buy softdrinki liters. We drink it, sometimes without thinking about the harm they can do to our body. And this damage, however, is quite large, repeat what society for the protection of consumers' rights in many countries. So what is hidden from us manufacturers of carbonated beverages bright labels for advertising and propaganda? Let's investigate. 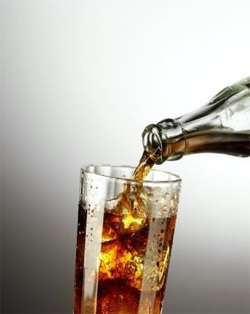 The basis of most carbonated beverages(Softdrink or transliteriruya, softdrinki) is water with the addition of acid and sweet components or, simply, acids and sugars. In this structure is the essence of the idea of ​​"soda": substances that make it up, excite our taste buds, so after every sip drunk thirsty again and again. Softdrinkami impossible to get a drink. Thirst is muted in the short term, but there is again some time later. What to do? our site offers a way out of this situation - mineral water. In addition to quenching thirst, it is able to make up for lost salt with sweat, making her contribution to the struggle with the heat simply invaluable. 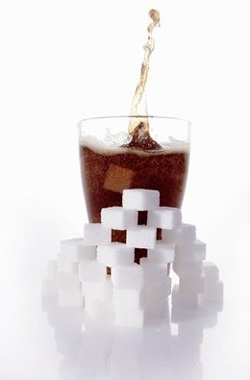 As we have seen, a compulsory componentsoftdrinka is sugar. But is it bad? In 100 ml of carbonated beverages typically contain 40-50 calories provided by digestible carbohydrates. A lot or a little? Approximately the same amount found in a glass of tea with five spoons of sugar. Note that sodas few drink 100-200 ml, they are consumed liters, especially in hot weather. Thus, our body gets a huge amount of refined sugars, which are the factor for the development of diseases such as tooth decay, obesity, disease cardiovascular and even diabetes.

A curious fact: 25% of people have elevated blood triglyceride levels after ingestion of carbohydrate, which is a risk factor in atherosclerosis. Of course, this phenomenon is not dangerous, once emerged, however, a systematic rise in triglyceride levels can disrupt the metabolism of fats and cholesterol in the body.

Today, many manufacturers of carbonatedbeverages used in place of natural carbohydrate sweeteners. This significantly reduces the energy value of the drink, and minimizes the effects of refined sugars described above. Nevertheless, it is necessary to think ten times before you infinitely taken with food or drink sweeteners. our site will list the harmful effects of the most common of this group of substances:

On the dangers of acid 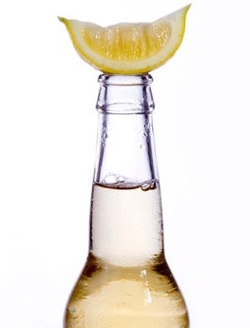 Citric acid (E330) can acton tooth enamel. Caries, it certainly will not cause, but will contribute to a number of diseases of the teeth and in some cases to provoke pain attacks in people with hypersensitive teeth and in some forms of dental caries.

More dangerous phosphoric acid (E338), capable of attaching ions calcium. First, it binds calcium,contained in saliva. The experts found that the systematic ingestion of phosphoric acid is able to flush out calcium from the bones, it is dangerous to the development of osteoporosis, in which there is an increased bone fragility even at minimum load. Our website would like to emphasize that this would not be so dangerous if calcium is sufficiently fed with food, making up losses. However, with increasing human consumption of carbonated beverages there is a decline of interest in milk - the main source of calcium (about other sources of this trace element, you will learn from the article "Proper nutrition, dental tips"). Recent studies have proven that phosphoric acid contributes to the development of urolithiasis. This is due to leaching of calcium from the bones and an increased load on the kidneys in connection with this phenomenon. 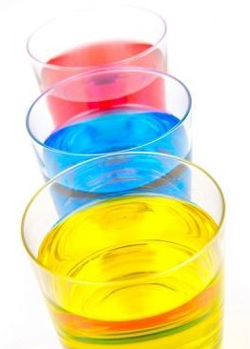 Benzene, as a chemical compound which has long been known. After the first synthesis attempt it was used in the perfume industry, as it has a pleasant fragrance (by the way, a number of chemical compounds based on benzene was called "aromatic" thanks to this property). Today we know that benzene is a strong carcinogen (ie, able to play a role in tumor development).

In softdrinkah used sodium benzoate (E211). It is a preservative with a weak carcinogen. Its use in the production of most carbonated beverages. Today, many of these drinks are added vitamin C - ascorbic acid. However, such an additive from more harm than good.

For more than 15 years, it is known that whenthe interaction of sodium benzoate and ascorbic acid released toxic benzene, but some unscrupulous manufacturers of carbonated beverages are still neglecting this information.

It is theoretically possible release of benzene atbenzoate interaction with any acid, but as long as it has not been proved, we can not "sound the alarm". And then today on our website advises to pay attention only to the content in carbonated beverages vitamin C (and do not forget about the dangers of benzoate). 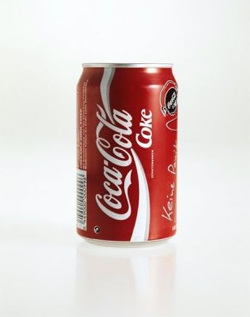 Caffeine is often found in softdrinkah. This makes tonic drink. Man drinking cola (which often are added and caffeine), may experience a surge of strength and health. However, this effect is usually of short duration and is replaced by irritability after a few hours, fatigue, insomnia (if you drink Coke for the night). The effect is partially removed when re-admission of caffeine. So manufacturers of carbonated beverages get regular customers. After a certain dose for each individual, the exhaustion of the nervous system occurs, accompanied by headaches, fatigue, apathy, or, conversely, irritability. Caffeine stimulates the heart and increases the burden on him, what, again, there is nothing useful. Among other things, caffeine causes loss of calcium in urine.

An interesting historical fact. As a tonic supplement is not always used caffeine. The name «Coca-cola» is derived from the American Coca plants, whose leaves extract originally was part of the carbonated beverage. From the same plants get cocaine, which at the beginning of development of the company «Coca-cola» was considered almost a panacea in the world. After it was discovered its ability to cause drug dependence, cocaine banned from use in food and replaced less hazardous substance - caffeine. 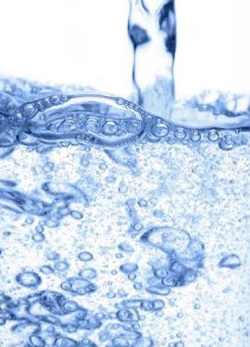 Carbon dioxide is one of the majorsoftdrinkov components. To him they owe their name - "soft drinks." By itself it is not dangerous, but those who suffer from diseases of the gastrointestinal tract (gastritis with increased secretion, peptic ulcer, enteritis, flatulence and other diseases) have to be careful, because the carbon dioxide can cause indigestion or pain attack. The fact that the connection of the gas with water forms carbonic acid, irritate the stomach and intestines. This acid, however, is very unstable and decomposes with the formation of the starting materials: water and carbon dioxide, causing the accumulation of the latter in the intestine.

That is why people suffering from diseases of the gastrointestinal tract, any soda (even mineral), our site encourages shake to release dangerous gas.

To clearly see the danger in carbonated beverages, spend 2 experiment. 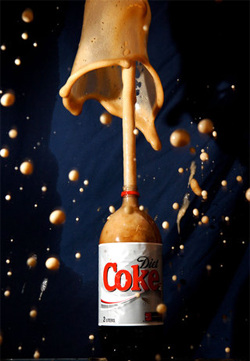 It promotes rapid chemical reaction is the same aspartame, which has already been mentioned above. And this reaction can occur in the stomach or in the mouth of any!

Everyone decides for himself what he is and what to drink. our site is only an overview of the most dangerous components of carbonated drinks, which have become extremely popular in recent times.