The main symptoms of intestinal obstruction

The concept of intestinal obstruction

Mechanical obstruction can bestrangulation (intestine nodulation, volvulus bowel, compression ulcers and areas of the mesentery from the outside with the local blood circulation disorders, various types of infringement) and obstructive (blockage of the intestine foreign bodies, food masses, bile and fecal stones, a tangle of Ascaris, intestine narrowing inflammatory infiltration or tumor from the outside) . Intussusception is both obstructive and strangulation obstruction. Thrombosis and embolism of mesenteric vessels (blood vessels bryzzheyki) also cause intestinal obstruction.

The causes of intestinal obstruction

Spastic ileus is rare. In most cases, the cause of persistent spasm one or more intestinal sections, which leads to the development of ileus may be ascariasis (local impact of toxic substances emitted roundworm), lead poisoning, irritation of the intestinal wall foreign body roughage sometimes hearth reaction further spasm may be replaced by paresis and paralysis of the intestine.

For the spastic form is characterized by obstructionthe rapid development of symptoms as long as violent bowel motility, exhausted, not replaced motility inhibition, coming faster than the more pronounced spastic attack.

Paralytic ileus alwayssecondary, caused by exposure to toxins or intestinal innervation reflex influences. The most common cause of its development of peritonitis, abdominal injuries, bleeding in the mesentery and retroperitoneal space. Sometimes paralytic ileus causing myocardial infarction, as well as drugs and other drugs that suppress intestinal motility.

The main manifestations of intestinal obstruction 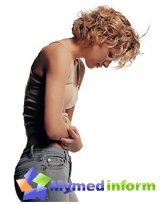 The main symptom of intestinal obstructionIt is only increasing bloating. The phenomena of the secondary functional obstruction usually occurs within a few days, although there are times when they are progressing rapidly, and already at the end of the first day formed paralytic ileus.

Abdominal pain - the most common symptom of intestinalobstruction. When strangulated intestinal obstruction, it usually occurs acutely, sometimes very intense and usually cramping. With extensive roll the small intestine and painful shock can rapidly develop in nodulation. For more obstructive ileus is characterized by slow growth of the pain that is almost never intense. When bowel obstruction the pain is localized primarily in the area of ​​the lesion, later she gets spilled. Termination of pain comes with the full colon destruction that manifested severe general condition.

Vomiting (first food, then the bile, and morelater stages - intestinal content with fecal odor) is a constant symptom of high intestinal obstruction. The lower in the bowel obstruction is located, the less intense vomiting. At low colonic obstruction vomiting may be absent altogether.

Latency stool and gas - one of the most importantsymptoms of intestinal obstruction. Attempts to patients (often experiencing excruciating urge) to empty the intestines are inconclusive. However, be aware that at high obstruction after cleansing enema of the following intestine may allocate significant amounts of feces and gases, but the relief does not occur or it briefly.

Adrift ileus can beacute (full) and chronic (partial). Partial bowel obstruction often caused by adhesions or tumor. Symptoms of the disease at the same time less bright and are either protracted or appear in the form of repeated acute attacks subside on their own or under the influence of conservative treatment measures. But when one of these relapses can develop a picture of acute obstruction. Partial bowel obstruction often cause colon tumors, however, all such patients require careful examination of the colon.